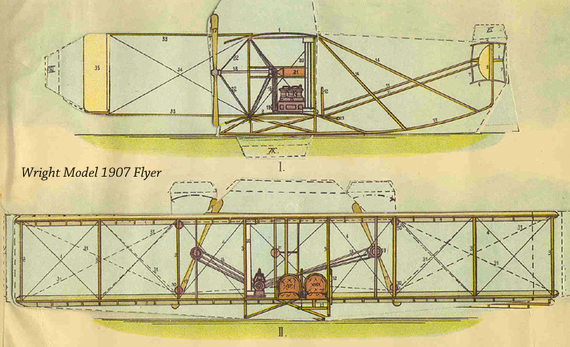 Once again, the Whitehead Affair is heating to full boil. The reader might remember that in 2013 Paul Jackson, the editor of the aerospace industry guidebook, Jane's All The World's Aircraft, proclaimed Gustave Whitehead as being the first human to fly, in August of 1901, near Bridgeport, Connecticut, some two years prior to the first flights of Wilbur and Orville Wright.

To say this caused a "flap" (not as in "flapping wings") would be a major understatement, and to say that this coronation by Jane's editor was with merit would be an erroneous statement. The editor was persuaded by the flimsy "evidence" presented by a part-time aviation history dabbler who was and still is employed by a company in Germany which says it will (someday) produce a "car plane" -- a roadable airplane, a flying car.

Since mid-2013, there have been several political battles between those in elected office in Connecticut on the one hand and on the other hand those in North Carolina, site of the Wrights' first flights, and the Wrights' home state of Ohio, over which state can claim the honors.

Lost in much of the discussion and debate over who was first to fly is the simple fact that the evidence for Gustave Whitehead is extremely thin to non-existent, while the work of the Wrights is evidenced by volumes of notebooks, numerous diaries, piles of photographs and reams of letters. Indeed, it would not be an exaggeration to say that those who believe that Whitehead actually flew sustain themselves on "a hope and a prayer" -- faith in that supposed fact -- because the absolute proof of that claim is nowhere to be found.

The argument being posed from the Whitehead camp has shifted of late to become a frontal attack on the Wrights, their honestly, their work, their legacy and the history surrounding them. This is transparently reactionary, given that Gustave Whitehead's honesty, his work and legacy and the history surrounding him have been effectively and repeatedly exposed as ranging from lacking to dishonest to fraudulent.

Enter the editor of Jane's All The World's Aircraft, once again, in a December 28, 2014, essay titled "Wright Brothers 'Hijacked History.'" The central problem with the good editor's essay's thesis is that his "facts" are sloppily gathered and in most cases not even facts at all. His willingness to cast the Wrights as "hijackers" is revealing of his bias and prejudice.

One would think that Jane's editor would be familiar with Jane's, the publication, yet Editor Jackson writes, erroneously, that the 1913 edition of Jane's recognized the Wrights as first humans to fly a controlled powered aerial vehicle, when -- in fact -- that happened in the 1917 edition of Jane's.

One would also think that the corporate office of the IHS conglomerate, owner of the Jane's publications, would recognize how poorly Editor Jackson's Whitehead comments and errors reflect on the IHS corporate stance (quoting the IHS web site)...

That might be true in plastics, oil and gas, but when it comes to aviation history, in this writer's view, IHS's editor Jackson fails to meet that IHS standard.

Similar errors populate Editor Jackson's essay -- far too many to mention here -- so, those interested in exploring the matter more deeply can read the post on my Gustave Whitehead site here, as well as reading Editor Jackson's remarkably mish-mashed essay here.

It's unlikely this matter will be resolved anytime soon and then fade from the scene, so updates will be posted as circumstances and eruptions warrant.