North Carolina's adoption of the notorious HB2 "bathroom bill," a preposterously unenforceable and shockingly ignorant anti-trans law, prompted a high-profile boycott backlash costing the state $300 million or more. PayPal cancelled a new facility that would have created 400 jobs. Bruce Springsteen cancelled a concert appearance. A number of conferences and meetings have been relocated to other states. Most devastatingly, for basketball-obsessed North Carolina, the NCAA has moved their championship games out of the state.

But there is one group that was delighted to meet in North Carolina: the Association of American Editorial Cartoonists (AAEC), the people who express their views on politicians and political controversies with barbed, often caustic satire expressed in drawings. They met at Duke University last week, and in a panel discussion of HB2, they joked that it was their way of thanking North Carolina Governor Pat McCrory for giving them such good material. AAEC President Adam Zyglis says, "Other groups/companies are boycotting because that is the only way they can express a political opinion. And expressing an opinion is precisely what we do, so I say we should go to the heart of the controversy and speak out on this issue." 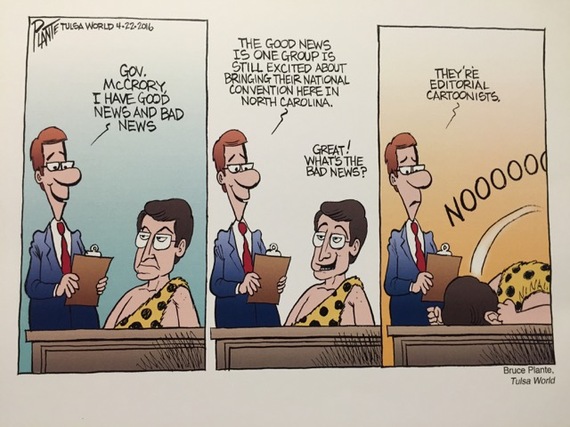 The meeting featured an exhibit of AAEC members' most compelling cartoons on HB2, including a few that supported the bill.

If a picture is worth 1000 words, an editorial cartoon is worth even more. It's pure alchemy, combining art, news, and opinion, provoking a shock of recognition and insight. Ben Franklin's political cartoon illuminated the issues behind the American Revolution. Famously, the most corrupt elected official of the 19th century, "Boss" Tweed, blamed the cartoons of Thomas Nast for his downfall. Nast also created the Democratic donkey and Republican elephant as well as the image of Santa Claus as a rosy-cheeked man with a red suit and white beard.

The members of the AAEC see political clashes and controversies differently, but they agree on some of the biggest difficulties they are facing, from the collapse of the newspaper industry to the splintering of media into partisan outposts and readers with tweet-length attention spans, and the problem of trying to cover an election year that outdoes any ability to exaggerate or caricature. Editorial cartoonists want to challenge readers' assumptions, not just reinforce them. That is harder to do than it ever has been.

And social media has taken reader outrage over cartoons they find offensive into the public arena. One panel discussion featured two cartoonists whose reader responses included phone calls, threats of violence, tweets, and even a phone call to the cartoonist's mother, most comments far more crude, hostile, and insulting than anything in the cartoons. To add insult to injury, the politician who objected to a cartoon used it in his own fund-raising direct mail and got a million dollars in contributions. When a newspaper pulled a cartoon after an avalanche of complaints, the AAEC made a strong statement advocating the right of cartoonists to express their views.

Some editorial cartoonists are using new technologies and social media to extend their ability to communicate. The Washington Post's Ann Telnaes creates brief animations, like this recent one brilliantly summarizing the controversial French law forbidding women to wear burqas on the beach. A book-length discussion of the subject could not be as insightful or meaningful. AAEC Vice President Matt Bors spoke about his political cartoon website, The Nib, and its Nibmoji, political emoji that include useful items like "dumpster fire," "race bating," and "mansplain." And Jay-Z has teamed up with cartoonist Molly Crabapple in the New York Times for an animated commentary on drug policy.

One of the most compelling moments came in the panel titled "Black and Blue: Cartooning #blacklivesmatter and Modern Policing" with Keith Knight and Darrin Bell, as each matter-of-factly told his own stories of being stopped by police.

The panel on "Small Hands and Big Hair" covered the "art of political illustration and caricature in this crazy election year." Cartoonists and illustrators discussed some of the practical challenges, from squeezing 17 caricatures into one picture for the Republican primary debates to finding new and meaningful ways to draw Hillary Clinton and Donald Trump. Thomas Fluharty said he Googled Dizzy Gillespie playing the trumpet to help him draw Donald Trump's puffed-out cheeks. Victor Juhasz said "the longer the campaign went on, the more Hillary's hair in the pictures came down." Steve Broder said that when he draws, he "plots out the shadows like they're little performers."

Many people doodle during meetings, but part of the fun of the AAEC gathering is that they project the drawings created by the members of the audience as they listen to the presentations on the screen so we can see how the cartoonists respond in real time.

"We look for that tell that says something about the personality," Juhasz said. Brodner added, "We want to add to the national debate. That means we draw with the brain, the eye, and the heart."