The White House Science Fair launches a week of activities that concludes with the USA Science and Engineering Festival Expo on the National Mall this weekend, all of which are part of the Educate to Innovate campaign.

A recent morning started with endless maze of security checkpoints towards the White House, with each one creating a new level of anticipation and excitement for what we knew was at the end of the trail. As we approached the building, the first thing I did was touch the building's exterior -- I touched the White House! I got a chuckle from a serviceman:

"Welcome to the White House. By the way, congratulations on your achievement." 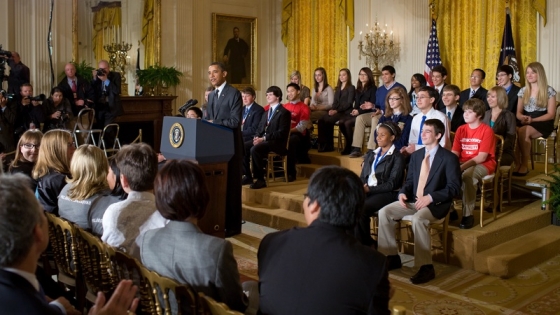 As we entered through the east door, a number of science boards and posters were seen lining the walls, true to the tradition of a science fair. Students as young as 10 were invited from around the nation to meet with the President and to showcase the power of the United States education system; students were selected because of their recent accomplishments in a broad range of STEM (science, technology, engineering and mathematics) national and international competitions, such as the Microsoft Imagine Cup, Science Olympiads or Intel Science Talent Search Competition. Their projects included creating mobile applications for diagnosing vascular diseases in third-world countries, improved spacecraft navigation systems, novel cancer-targeting therapies, uniquely-designed solar cars and prize-winning intelligent robots. Each student in that room had something enormous to show to not only the president, but to the nation: their potential.

It wasn't all just science that day. We were also given the opportunity to explore parts of the White House and learn about some of the history behind each piece, whether it be art or furniture. As I was listening to some of the history behind the Green Room (or maybe it was the Benjamin Franklin room), I looked out the window and saw the Lincoln Memorial and Washington Monument not too far in the distance. It was a picture perfect view.

After about an hour of roaming, networking and playing paparazzi (I wanted pictures with Dr. Steven Chu, Bill Nye, Adam Savage and Jamie Hyneman), I was invited to sit onstage with a few other students while President Obama was giving his speech. I wasn't given any instructions other than "sit here" -- how was I supposed to act and look with all cameras pointed to the stage? I eventually decided to look serious and straightened my back to maintain proper posture. As the president was announced, he walked out calmly to a huge burst of applause. As his speech began, I couldn't help but to feel inspired.

President Obama said, "If you win the NCAA championship, you come to the White House. Well, if you're a young person and you produce the best experiment or design, the best hardware or software, you ought to be recognized for that achievement, too." President Obama had a way with words, both in his choice of vocabulary and delivery technique. In all the photos, you can see that I was in awe with the words of this man.

My adventure to the White House ended with a handshake from the president and the words: "Thank you for everything you are doing -- you are truly an inspiration."

Little did he know it was the other way around.

---
Disclaimer: the writer, Wilson To, was part of the United States National Team in software design for the Imagine Cup Competition.

The Imagine Cup is an international technology competition hosted by Microsoft Corporation. It challenges both high school and college students to create innovative technologies that address the world's toughest problems, often centered on the United Nations Millennium Development Goals. The competition draws in over 300,000 students worldwide from over 100 countries. The worldwide finals will be hosted in New York City this upcoming summer 2011.