On Thursday afternoon, a group of about 300 teachers, students, parents, and supporters demonstrated in front of Mayor Bloomberg's home on 79th Street to protest his decision to close twenty public schools for having "failed" to improve student test scores sufficiently.

In a press release, Julie Cavanagh, a teacher at PS 15 in Brooklyn, who, along with Norman Siegel, a First Amendment lawyer, succeeded in obtaining a permit for the demonstration in front of the Mayor's home, accused Mayor Bloomberg of proposing a "radical and destructive educational agenda that would privatize our public school system." Ms. Cavanagh's school building also houses a charter school, PAVE, which, as mentioned in my previous column ("Senator Eric Adams and the Charter School Dilemma") is run by Spencer Robinson, son of hedge fund billionaire Julian Robinson.

Included in the press release is a statement by Lydia Bellahcene, a parent at PS 15, which is losing space in its building to accommodate the charter school:

The Mayor and Chancellor should not be making policies to divide, dismantle, and undermine our public schools: instead, they should be providing support and resources so that ALL of our children can be successful.

In a democratic society, there should be opportunities for all young people to get as good an education as their initiative and motivation can give them. Those who are less fortunate because of personal circumstances should be afforded the necessary attention to obtain an education that can give them a chance to take their place in our society as productive citizens, able to contribute to it as well as they can. But it seems that the Mayor's approach to public education is to divide groups against each other for needed resources: public versus charter school, an approach that undermines our democratic values. 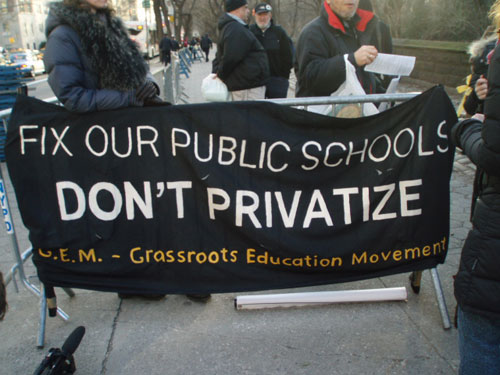 Seung Ok, a teacher at William H. Maxwell High School, a school scheduled for closing, pointed out in an interview that although the Mayor had considered the school too unsatisfactory to remain open, "ninety per cent of the students graduate although not necessarily in four years. Some go on to Ivy League schools and are quite successful."

Ok pointed out that because of another school closing several years ago in the same area, the student population at Maxwell expanded rapidly from 900 to 2,000. The necessary resources for the influx of these students, many of whom had special needs, were not forthcoming. As a result, despite all the effort the teachers provided to make up for the new challenges, the school was given an "F" in the Mayor's rating system. Soon after, the parents of the "A-list"--high-achieving--students transferred them to other schools and Maxwell High School will now be closed.

Richard McDonald, an 11th grade student at Maxwell, expressed his concern that the vocational courses offered at the school in cosmetology, lens-crafting for eyeglasses, and other specialized skills that would give students opportunities for good-paying jobs will no longer be readily available to public school students since such programs are rare. He felt that the school was being unfairly treated and that now "other kids will have to pay for the education I got for free." Richard, fortunately, will be interning soon at a lens-making establishment which will give him an opportunity to get a decent job.

Attending the demonstration to show his support was State Senator Bill Perkins, whose district extends into Harlem. He noted that the area is now "saturated with charter schools, to the disadvantage of public schools when a charter school is pushed into a public school facility." Perkins sees the Mayor's agenda as not only to "privatize the public schools" but other public areas such as sections of Central Park. He also pointed out that there is no conclusive evidence that charter schools produce better results than public schools although they serve to separate school communities into groups rivaling each other for space and resources. 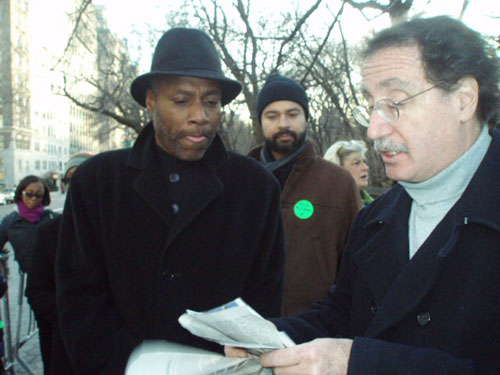 "As we remember Martin Luther King, jr., I wonder what he might be thinking as he looks down at what is happening to our schools again: separate and unequal," Senator Parkins observed. Others at the demonstration looked at the impact that these closings are having on teachers.

Richard Barr, a supporter whose children attended the public schools, and is Vice President for Political Action in School District 3, was asked what he would have done had his children attended a school with serious disciplinary problems. He replied: "I would have had as my first objective to work together with others to make the school better; not flee from it."

Across the street near the Mayor's house, before the demonstration began, middle-school youngsters from a private school were exiting the building at the end of classes. Several were asked: "Do you have to study for a lot of city-wide tests like the public school kids?" They couldn't recall ever having taken one.

Later, on the other side of the street, students, teachers and supporters marched up and down 79th St. chanting against the closings, as dozens of policemen stood watch, guarding the Mayor's home from the peaceful demonstrators.

Ms. De Souza hopes that instead of relying on the hype created by the Mayor and Chancellor about charter schools, members of the press will go into the public schools and investigate them for themselves, seeing the challenges that many hard-working teachers and serious students face every day. Perhaps then they would be better able to understand what is really happening to Mayor Bloomberg's public school system.