At a hearing at Brooklyn Tech Tuesday evening, Chancellor Joel Klein and the PEP (Panel for Educational Policy) listened from 6:00 p.m. into the early hours of the morning to students, teachers, union representatives, parents, and political leaders protesting the closing of twenty city schools. The conclusion seemed to me to be foregone that the schools would be closed since Mayor Bloomberg appoints eight of the members of the panel. Yet the passion and often logical arguments of many of the speakers should have given them pause before they decided to vote. Early this morning the board approved the school closings.

A crowd of over a thousand people marched, displayed signs and listened to speakers from a giant screen set up a block from the school. James Vasquez of the Queens UFT pointed out that there had been no hearings prior to the decisions made on which schools were to be closed and many of the speakers revealed inconsistencies in the way in which the closings were determined, opening the possibility for lawsuits. Inside the vast auditorium, which could seat three thousand, people streamed in, filling the hall to capacity. 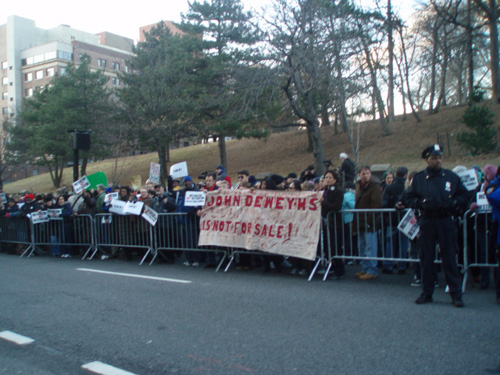 Chancellor Joel Klein, who was roundly booed even before he said a word, declared that "the first obligation in public education is to our children. The schools we are closing tonight did not come up to our standards." Klein was observed several times to be detached enough from the proceedings to briefly read a paper during one of the speeches and, receiving a cell phone message, absented himself at another point from the meeting. 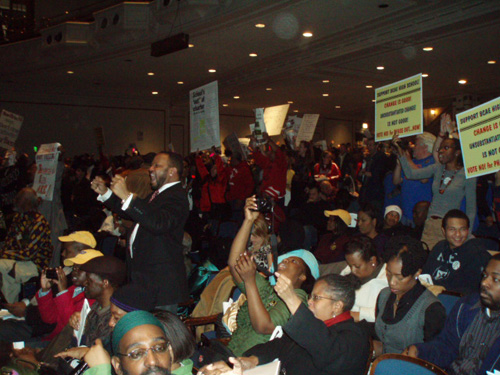 The speeches by noted public figures such as Bill de Blasio, Public Advocate, Michael Mulgrue, President of the UFT, the NYC teacher's union, and Councilman Robert Jackson, head of the Education Committee of the New York City Council, touched on similar themes: that the decisions made to close the schools chosen to be shut down were based on faulty or inconsistent criteria -- that these schools could be salvaged if there was more of an opportunity for parental and community involvement as well as more resources; and that the process by which PEP decided to close the schools and the reasons for replacing some of them with charter schools should be made "transparent." 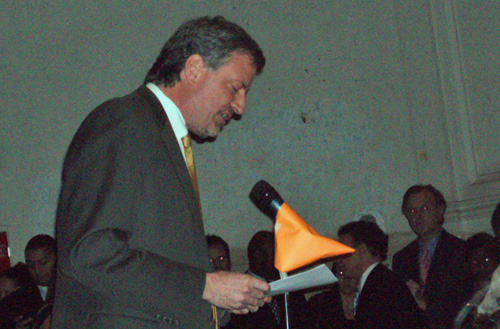 The pattern followed by the Department of Education and Chancellor Klein is, at least to me, fairly obvious: many of the public schools being closed were "made to fail" by the conditions in which the teachers were forced to teach:

1. A successful school is suddenly burdened with an influx of students from another school that has been closed. Many of these newly arrived students have high needs but the DOE does not give sufficient support to enable the school to accommodate these students with some chance of success.

2. The school begins to perform badly in standardized tests, four-year graduation rates, and other indicators of "success," as determined by the DOE.

3. Parents of many of the high-achieving students withdraw their children from the school because it now has a "failing" reputation.

4. The school, now completely overburdened by special needs students and inadequate staffing and support, is judged a "failure" and is closed.

5. Smaller schools, many of them charter schools, replace the "failed" school and the cycle begun when the first school was closed repeats itself.

This is like a swimming coach requiring a successful swimmer to wear concrete shoes at all future competitions and then kicking him off the team for "poor performance."

The inconsistencies in the evaluation of schools and the neglect that the DOE has shown in their treatment of schools in predominantly minority areas seem to me to give the accusations of "racism" leveled by a number of the speakers at the PEP committee some foundation. (PEP conspicuously over-represents white males and females, considering that only 14% of the City's students are white.)

When one of the most respected of the speakers, Annie Martin, President of the NYC chapter of the NAACP, was rudely treated when her microphone was shut down because she'd gone over the two-minute "limit" before she had finished her statement, I wondered at the insensitivity of some of those on the PEP panel who should have been very much aware that "lack of respect" was the most persistent accusation running through the hearing. This action was so egregious that one of the panelists interrupted the proceedings to object to Ms. Martin's treatment and she was allowed to finish her talk. But the damage had already been done.

What struck me in my interviews with teachers, parents and students was the inconsistency and even irrationality in which the DOE has administered and evaluated these schools. Several sources told me that the Mayor had forbidden fund raising at Beach Channel High School, while recently I personally attended a fund raiser at a Manhattan school in East Harlem. At Beach Channel, a math teacher, David Pecoraro, who later spoke eloquently at the hearing, informed me that two of the specialized programs at the school, oceanography and culinary instruction, were phased out while these same two programs are going to be re-instituted in one of the schools replacing it.

Joy Blakeslee, a teacher at New Day Academy, one of the "new" smaller schools that is going to be closed, expressed her confusion at the treatment of her school. (I "embedded" myself in the line of those waiting to enter the building and was struck by her students' sophisticated awareness of what was happening to the school, especially when one of them referred to the school as "our family.") In November, New Day, she explained, which is a member of a progressive consortium that relies more on the portfolio system than drilling students on test scores, was given a new principal, who has an excellent reputation in "turning around" a school to make it successful; three weeks later, it was announced that the school would be closed. 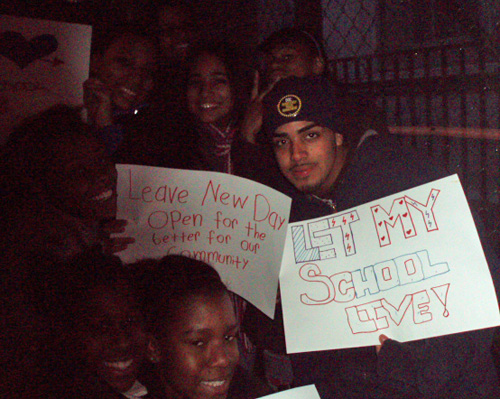 There are many more stories about the mismanagement by the DOE of these so-called "failed" schools which I plan to include in a following article. But my strong impression from the evidence I have gathered from students, parents and teachers over the past few years is that the Bloomberg Administration is practicing a form of "educational colonialism" on our school system. Whatever good he believes he is accomplishing, in favoring those students who are fortunate enough to have parents or other people who can look out for their interests at the expense of those students who do not, he is making a terrible mistake.

When I attended Music and Art -- now La Guardia High School back in the 1950's, the only "school closings" I ever heard of were due to unsafe building conditions. And I still remember, as I plan to celebrate my 50th class reunion this spring, how disturbed I was when M and A left "The Castle" on Convent Avenue and merged with our arch-rival, Performing Arts, at a brand new building near Lincoln Center. But even merged, the title of the school includes the names of "Music and Art" and "Performing Arts."

These schools that are being closed were an integral part of their communities. Such venerable names as Columbus High School and -- though much newer -- Paul Robeson High School are an important part of the identity of people whose schools will now be associated with failure. And failure, as one eloquent young woman, holding her baby as she spoke, insisted, is the one thing that is most resisted in minority communities because our culture often tells them in one way or another that they are failures. It is our society that should be considered "failed" for creating that impression; closing these schools reinforces it.

That Arne Duncan and the Obama Administration are encouraging this kind of "educational triage" in their "Race to the Top" grants is a very serious mistake, especially Duncan's enthusiasm for Mayor Bloomberg. Considering that many of these communities, so badly served by our educational system, gave President Obama their most enthusiastic support, this is not just a mistake. It's a tragedy for democracy: to the teachers, the parents and most of all, the children of New York City.

Updated, Jan. 29: I just found out that Dmytro Fedkowskyj, the Queens member of the PEP board, gave a very thoughtful statement explaining why he voted against the closings. It is encouraging to know that at least one member of the board took his responsibility seriously.