At a rally held on the steps of City Hall on February 22, Lenore Brown, a Parent Advocate at Cypress Hills Public School and a member of the New York Coalition for Educational Justice, joined with Mona Davids, President of New York Charter Parents, in a united front against what they feel are the divisive educational policies of the Bloomberg Administration. The criticism centered on the way in which the Department of Education "co-locates" charter schools in a building with district schools. 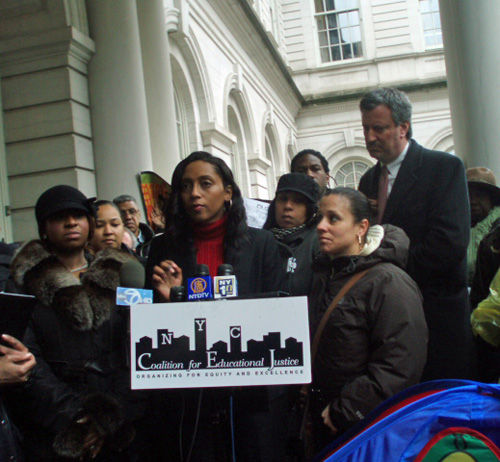 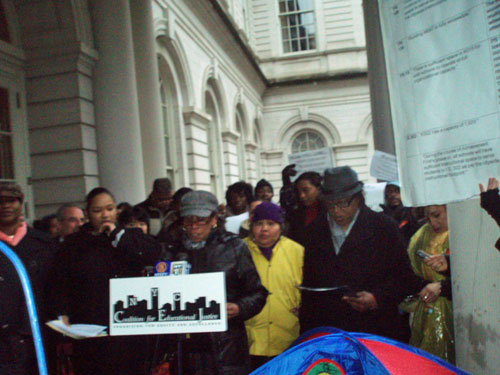 Concerns were expressed for what Davids described as "educational apartheid" in pitting parents of neighborhood children against each other for space for their children's education. Disturbing stories were told by parents of the negative results of "co-locations" that deprived young learners of needed class space. At High Ridge High School, they said, the school library has been closed for two years. At one elementary school, they said, 72 classrooms would be needed to accommodate children while the school only contains 55. The overall message conveyed in a chant at the rally was clear: "We need the truth!"

Since the charter school movement has been getting considerable attention these days from adherents and critics, I believe it's important to hear the voices of charter school parents themselves. The following interviews are of parents who believe in charter schools as a "choice" for their children to get a better education. But they now have serious questions about the way in which the schools their children attend are being administered.

Mona Davids, founder and president of the New York Charter Parents Association, is both a supporter and critic of charter schools. With an 11-year-old daughter in a charter school, she has had experience as a parent leader in a public school from which her daughter graduated. The same daughter now attends a new charter school in the same building. Davids, who was featured in the NY Post, Gotham Schools and Center for Education Reform as the charter parent advocate fighting for public school choice in New York City, was instrumental in the effort to co-locate the charter in her daughter's public school building. Were it not for Davids' campaign, the under-utilized public school building would not have been sited to house Equality Charter School. However, Davids, a strong supporter of charter schools, is alarmed at the lack of accountability and transparency in charters and the divisiveness of the charter movement in New York City.

Among her concerns and suggestions and those of other charter school parents I interviewed are the following:

1. That the charter schools which are only located in minority neighborhoods are pitting blacks against other blacks. The perception of district school parents is that charter schools in the same building as theirs are taking space and other resources away from them.

2. That the use of testing divides students into those who "fail or thrive"; and that many charter schools are pushing out low-performing, special Ed and ELL (English Language Learner) students. The money appropriated for their education is not following the students because these funds are left in the charter schools' budget for the school year. This creates a financial burden on the district schools receiving the expelled and "counseled out" charter students, creating more animosity towards charter parents.

3. Charters need more oversight and accountability in addition to test scores. An example of what happens without strict oversight is a charter which expelled 48 students prior to the state tests to ensure that the school received high test scores. Parents complained but the NYC Department of Education initially ignored them.

4. Most charters refuse to make their charter and by-laws available to parents and, when forced to, charge parents $.25 per page for hundreds of pages of documents. Many parents, therefore, cannot afford to buy a copy of their school's charter and by-laws, which should really be made available to all parents by posting it on their website.

5. The use of strict and indiscriminate behavior modification techniques at some charter schools in molding the students. Their devastating effects on children's psyches must be addressed and changed.

6. The lack of Parent Associations independent of the charter board of directors also needs to be addressed. Parents are presently not viewed as stakeholders and only useful when needed to advocate for more funding.

Davids cites as an example of a charter school that went very wrong: East New York Prep. Its principal, Sheila Joseph, has been recently put on a two-year probation, and the charter school is scheduled to be closed in June. In one year there was a 100% turnover in the staff at the school. As already mentioned, 48 students were expelled late in 2008 just before a new set of standardized tests were to be administered. According to a DOE report cited in Gotham News (January 26, 2010), Joseph has made a $5,500 payment to a new member of her board that happens to be her son's father. She did not file a revision of the school charter in order to become school superintendant at a salary increase of $60,000.

Yet, in a DOE evaluation of East New York Prep for 2008-2009, the first item mentioned is "the excellent leadership of the principal, who has a clear vision [and] is starting to create a dynamic school." And, true to the DOE's data-driven evaluation of success, one of the criticisms was that the school needed to "improve the use of data to better analyze the performance of different groups of students. ..." If the DOE could miss the serious problems mentioned, what standards are they looking for to consider a school a "success?"

Several of my informants, all but one with children in charter schools, have expressed other concerns. An education organizer reported that when she canvassed parents in her area of the Bronx that the local school was going to be closed, most of the parents had no idea that their children were going to lose their school. Their "new" school was to contain a charter school and the parents were worried about how space would be shared with the children's public school.

(For those who feel that the "lotteries" conducted are a fair way to place children in charter schools, it should be noted that this can be a self-selecting process, especially since in areas where there are many non-native English speakers, even the significance of a lottery might be missed.)

According to a New York Post article, one of my sources, Mariama Sanoh, declared."They're saying they [the charter schools] don't have the resources to deal with kids with [a] disability. Instead of helping me, they're trying to push him out to a real public school that will give him what he needs."

In an e-mail to the Post, Principal Julie Johnson blamed the high attrition rate largely on the school's mobility. The academy has moved or been slated to move into four buildings in less than four years. She called allegations that the school wasn't serving special-education students, who make up 15 percent of the school's population, "inaccurate."

"We are proud of our service to our special-education students," she wrote, adding that "the parents decide whether to move the students [out of the school] or not."

But Sanoh has a different story. Her child is presently being "counseled" to leave the school. In the meantime, Sanoh has gone thousands of dollars out of pocket to try to get a proper diagnosis of her child's disabilities through private services. As she herself says of this school:

[My child's school] has lost a vast amount of students this school year alone, including those that have special needs. Charter schools are kicking these children out as early as November once they have received the funding for them. They are forcing these students back into district schools, which are 'real public schools,' knowing that they service all children regardless of their needs. So why do these charter schools continue to accept public money when they are not 'true public schools'? Public money deserves public accountability!

Among the demands that were made by the parents at the Charter School Lobby Day in Albany on February 2 were that the charter school law must be changed to require more accountability and transparency in financial matters; that the special education programs be retained and strengthened, and that those teachers who stand up for students who are being mistreated be protected against arbitrary firing. Other demands include: equal per pupil funding and a lifting of a cap on charter schools; an independent Parents Association; a formal complaint and grievance process for parents; a better process in citing charter schools in public school buildings to avoid the friction that is "ripping apart communities"; the maintenance of ELL and Special Ed students, no longer expelling or counseling them to leave the school; state receivership, prohibition of for-profit charter management organizations; and that the NYC DOE no longer be an authorizer of new charter schools -- the Board of Regents should, exclusively.

When asked to comment, a spokesperson for Secretary of Education, Arne Duncan, Peter Cunningham, Assistant Secretary for Communications and Outreach, said: "Mr. Duncan supports good charter schools and not bad ones. We want the same accountability for all schools."

The parents of charter school children feel that these schools should be available to anyone who wants their children to go there, but they believe that many serious problems must be addressed if they are to have confidence that their children are getting the best education they deserve. All parents want the best education for their children and if the district schools were not failing, there would no need for charters. Until the district schools are sufficiently improved and no longer undermined and set up to fail, parents will continue to flock to charters.

I would only wish to add that the purpose of this article is not a blanket condemnation of charter schools in New York City but to raise questions about how wide-spread these concerns are before a great many more of the schools are established as a "solution" to the problems of public education in this city. One can hope that with the uniting of charter school parents with district school parents the hopes of such advocates as councilwoman Mark Deverito can be realized: "All schools need the opportunity to be great."