While national media attention on mountaintop removal mining has largely been focused on West Virginia, the PBS Independent Lens series will air "Deep Down" this week, an inspiring new documentary film that reminds the nation that over 290 mountains--58 percent of the devastation in Appalachia--have been blown to bits in eastern Kentucky.

Far from any tale of despair, Deep Down chronicles the extraordinary success of a small group of residents to educate their neighbors about the human cost of strip mining on a community "caught up in the machinery of coal."

In many respects, Deep Down is a revelatory film, breathtakingly poignant and poetic, and goes beyond the politics of protest to look at the inexorably connected lives of Appalachian residents forced to ask themselves, in the words of Beverly May: "Are there some things you can't put a dollar value on?"

On the heels of Kentucky's historic decision last week to cancel plans for a new coal-fired plant in the heart of coal country, Deep Down shows how an eastern Kentucky community divided by a coal company's intent to launch a mountaintop removal operation does not dissolve into warfare, but deliberately (and respectfully) comes together to defend their land and homes.

As one resident calmly testifies at a local hearing: "Imagine a society that is dependent economically on blowing up mountain after mountain. Then imagine a group of people who decided to stand up against it. That is exceptional."

Deep Down is an exceptional film, and a profoundly informative one, and should be required viewing for every American in our 48 states that burns coal--especially the new junior senator from Kentucky, Rand Paul.

The education of Sen. Rand Paul on coal issues has a long way to go. In response to the Upper Big Branch disaster, he drew the outrage of coal miners when he quipped that "accidents happen," regardless of safety regulation. Weeks later, he admitted he had no idea about Harlan County's epic and deadly coal mine labor struggles.

For many Kentucky residents in eastern Kentucky, though, Paul hit the bottom of the barrel when he dismissed the issue of mountaintop removal as a minor annoyance--or in Paul's words: "I don't think anyone's going to be missing a hill or two here and there."

In truth, more than a hill or two have been blown to bits: Beyond the 290 mountain, more than 574,000 acres have been wiped out in Kentucky. The hills and hardwood forests of Floyd County, in particular, have not only been devastated; the mechanization of mining through mountaintop removal and strip mining has resulted in massive job losses. 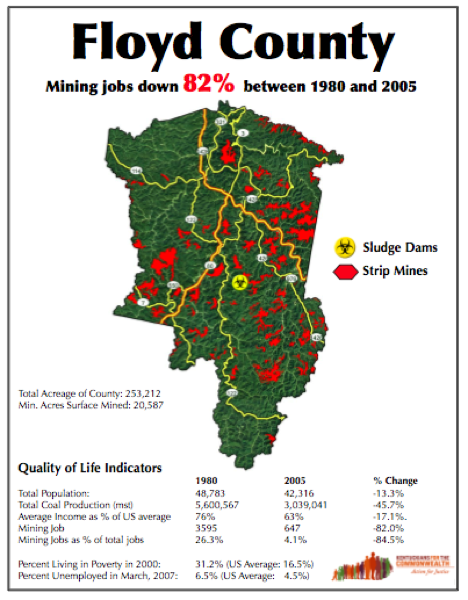 For Beverly May and Terry Ratliff along Wilson Creek in Floyd County, Kentucky, mountaintop removal becomes a personal issue in Deep Down, when the Miller Coal Company requests a new permit. For the cash-strapped Ratliff, an artisan who lives in a peaceful holler on the edge of the proposed mountaintop removal operation, the coal company's offer to strip mine his land forces him into a hard decision.

Working with the Kentuckians for the Commonwealth, May and a growing group of residents work to educate their community on the impact of the strip mine on all facets of their lives. At a "coal haul road" hearing, the informed residents note that 85% of all traffic accidents are related to heavy trucks, and win over a local judge executive who agrees to deny a waiver for the coal company.

"Whatever happens, Terry," May reminds her friend, "we're still neighbors."

Incredibly resilient and prepared, Beverly May, who works as a nurse at a clinic for those without insurance, might be one of the most endearing and powerful anti-mountaintop removal spokeswomen in the nation. At a crucial hearing on "lands unsuitable for mining," she bridges the differences in the packed school by standing up to the coal company executives and reminding her neighbors: "You are not my enemy. I am not your enemy. We are all victims of these coal companies. You're on top of the mountain; I'm on the bottom."

In the end, in a triumph of participatory democracy, the Maytown community refuses to be polarized by the coal company and wins enough concessions from the local authorities to keep the mountaintop removal operation from being feasible. The coal company eventually files for bankruptcy.

It's a teaching moment for coalfield communities across the nation--and for incoming politicians like Rand Paul.