In an Occupy-saturated New York, there's a push for education by the people for the people that calls for new structures of collaboration and new uses of resources. But two organizations, The Public School and Trade School, were in play well before the first tent ever popped up in Liberty Square. Designed by artists and organized without curriculums, classes range from philosophy and time travel to mushroom hunting and stilt walking. They won't be churning out bridge-building engineers, but illustrate a dream of collective education.

Both schools have similar structures. They have websites where classes can be proposed by the general public and then approved, and they hold classes wherever they get space, often in public locations (Trade School is currently seeking a storefront space). Most students are adults, and receive no credit for their involvement. However, the schools seem to be diametrically opposed to each other in their approach to theory and practice. So I tried my hand at teaching a couple classes and found their nature to be quite different than at a traditional institution.

My first class was "The Technology of Dissent" at The Public School New York. This was a general overview of activist technology that had arisen over the past year, within a larger historical context.

I had prepared some research, but was told that I'd have to be ready to have the class taken out of my hands by enthusiastic participants or organizers. The handful of people that came out on an overcast Sunday afternoon were all engaged in the discussion, such that I realized I did not actually have to be prepared to teach; the class simply attracted people already engaged in the subject.

Which brings us to the point of The Public School: anyone can teach, or be on the committee. Rarely is a class proposed without a teacher, and an entire class can be composed of ten self-appointed teachers and no students. The school idealizes being de-institutionalized, and while it claims to "pass around power like a ball," it also admits to being political and experiencing conflicts. The committee approves classes based on popularity, but is skewed towards social and theoretical discussions, often playing keep-alive with favorite themes.

For a dose of practicality, I proposed the class "Get Found" with Trade School New York on search engine optimization targeted at artists, activists, and nonprofits -- groups that generally aren't able to afford web developers.

Trade School "celebrates practical wisdom, mutual respect, and the social nature of exchange," by having students barter with teachers for instruction instead of paying with money. It was nice to know that the instruction was considered valuable. Organizing the class was very straightforward, until I was asked to list the items I would accept from students to gain entry to the class. It's easy to come up with an hourly rate; but I took this more as a question of what I actually do with money. I asked for gummy candy, 9-volt batteries, and a flock of teaching assistants. It wasn't going to pay the rent, but was a low bar to joining the class.

Little did I know I should have set the bar lower. Students jumped on the "free labor" items first, lending some doubt that a person who was actually in need would grab a spot. Out of the handful of students that appeared on an overcast Saturday afternoon, only one had brought her own laptop and website for a workshop portion of the class. Despite that, they took diligent notes in preparation for starting to build their own sites.

Both schools are dealing with issues of control over who owns education and who can be educated. One could combine conceptual classes from The Public School and practical classes from Trade School in order to receive a free, well-rounded liberal arts background from the collective knowledge of New Yorkers.

But how will these models influence the future of education? Are they temporary testing grounds for ideas? Are they a form of activism? Let us know in the comments! 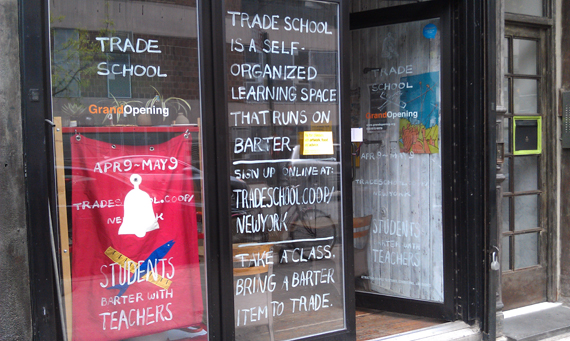