As the United States struggles to recover from the financial collapse of 2008-10, the newest casualty may be the promising reforms taking root in public schools across the country. The irony is that business leaders are calling with greater urgency for improvements in schooling, which they see as a precondition to rejuvenating our sputtering economy. But instead of accelerating, reform is slowing due to budget cuts.

This slowdown is one of the alarming findings in a new report by the Center on Education Policy, which earlier this year conducted a survey of a nationally representative sample of 457 school districts. The survey asked districts about their budgets for the school year that just ended and the one that begins in a few months.

The results are bleak. While the media has reported on cuts in state education spending and the effects of these cuts in individual schools or school districts, the CEP survey presents the latest national data on the fiscal condition of school districts of all sizes. The confidential responses from districts indicate how schools are likely to be different next year as a result of these cuts, which are expected to include teacher layoffs.

Here are the highlights:

Here are two charts depicting the breadth of the budget cuts among districts and the shrinking of federal stimulus funds that were used to make up for some of the cuts in the last two years. 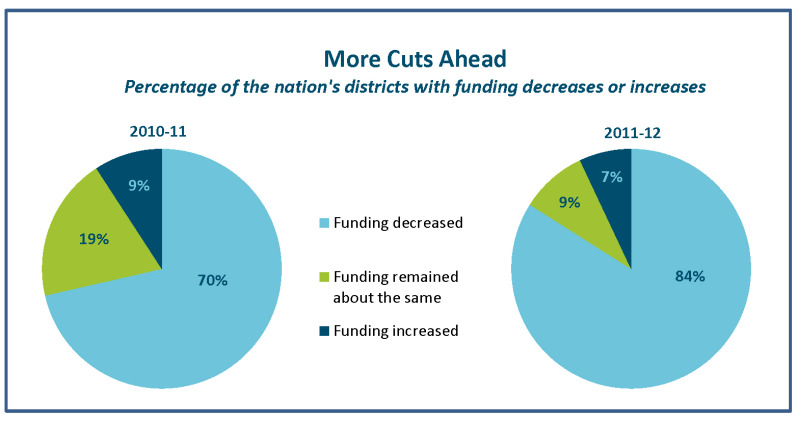 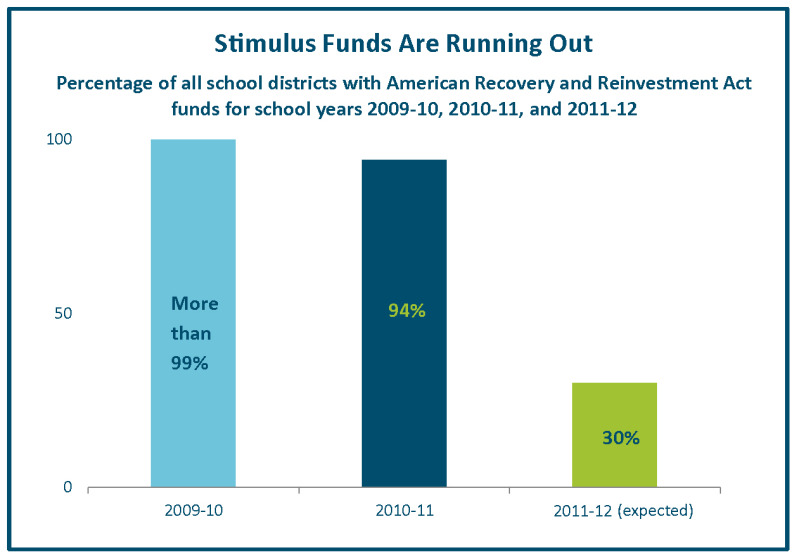 Parents of schoolchildren must be concerned about the impact of these budget cuts, which will likely increase class sizes and result in fewer teachers, counselors and instructional aides, including assistants for children with special needs. All of us ought to be concerned about what this will mean for our future. Will students now in school be less well educated due to this budget squeeze? Will they be able to contribute to our economy? Only time will tell.

One thing we do know from the survey is that education budget cuts are stalling reform. Nearly half of the districts with funding decreases in school year 2010-11 responded to these cuts by slowing their progress in implementing reforms. Another 17% postponed or stopped some or all of their reforms. This means that two-thirds of districts with cuts reversed course on reforms. In the upcoming school year, districts expect budget problems to continue to hamper their efforts to improve.

Demands for reform over the last decade have led to an increased emphasis on the core academic areas of mathematics and reading, which are seen as essential to raising the overall quality of education. Traditionally, school administrators do what they can to protect core academic subjects, making budget cuts in other areas when the times demand austerity.

Unfortunately, this past school year districts absorbed funding reductions not only by deferring purchases of equipment and maintenance of buildings, but also by laying off classroom teachers, including teachers of core academic subjects. Fifty-four percent of districts cut teachers of core academic subjects. A major consequence of fewer teachers will be larger classes and less attention to individual students.

These outcomes suggest that we, as a nation, are turning our backs on the demands of business leaders and other reform advocates to make core academics a national priority. We know we have to make budget cuts in times when less revenue is coming into government coffers. But we should not forget that future prosperity and the common good depend on a well-educated citizenry.

Are we squeezing our schools so much that we are endangering our future well-being? The latest CEP report warns us that we are indeed treading on unstable ground.