Cash-strapped and desperate, the Los Angeles Unified School District is set to fire around 3,500 teachers before the end of June. Couple these upcoming layoffs with a $595 million budget deficit, and the 2010/2011 school year is looking pretty shady. Resources won't be getting replenished any time soon. Inner-city schools suffering from high drop-out rates and over-crowded classrooms can expect both of these problems to increase, while education levels across the district fall into decline. 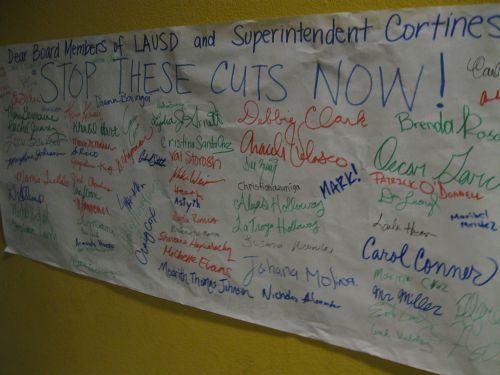 The situation has created a dramatic rift between the community and LAUSD board members. On one side, teachers, parents, students and community leaders are preparing for a full-day strike on May 15th, hoping to urge the LAUSD to spend its almost $1 billion of federal stimulus money immediately and save jobs now. On the other, the LAUSD warns that a short-term fix will only result in even more lay-offs next year.

"Obama gave LAUSD money to spend right away to prevent layoffs, but the Superintendent and the School Board are only spending part of the money now," said Noah Lippe-Klein, a teacher at Dorsey High School in South LA. "They say they are saving the rest for later. This is unacceptable." Lippe-Klein says that before laying-off teachers to save money, the LAUSD needs to cut private consultant contracts and district administration jobs, and slash wages for those earning over $100,000. The LAUSD says that it has been as thorough as possible in trying to avoid firing teachers. Either way, schools in LA are about to take a turn for the worse.

But the problems facing education standards in Los Angeles affect only one half of the city... at least for the short term. Private schools and the affluent districts, like Beverly Hills, responsible for educating LA's wealthiest children, will no doubt find a way to survive. Meanwhile, Title I schools like Crenshaw High School in South LA, with a 50 percent drop-out rate, a 70 to 30 Black-Latino population, and more than 60 percent of students on the free-lunch program, will be hardest hit.

The impact on the city in the long run, however, will be severe. "The number one thing that an economy needs is an educated work force, and that's what we look to the LAUSD to provide," said Fernando Guerra, Director of the Center for the Study of Los Angeles. "Less resources mean less opportunity and less progress." Poorer children are a target of educational cutbacks, but so too are LA's African-American and Latino communities. Together, Black and Hispanic students made up 85 percent of LAUSD high school enrollment in 2007/2008, at 10.9 percent and 73.7 percent respectively, totaling more than 575,000 students. According to Guerra, the under-education of lower-income African-American and Latino communties, by their sheer numbers, means that the education level of the city as a whole will fall in the next few years.

Carol Connor, a teacher from from Baldwin Hills Elementary School, says that educational cuts in California, where per-student spending is 47th in the nation, actually sever Fourteenth Amendment rights from poorer, African-American and Latino children.

"The Fourteenth Amendment guarantees equal access to education, a fair and equitable one," said Conner. "If our schools are paying less, then our children are not getting equal access to the same quality education as the students in all the other states. Being one of the largest districts, it's amazing to me that this is being allowed."

Arguably, the LAUSD can only do so much. In a state that continues to spend far more on prisoners than students, it's no wonder that the educational system in Los Angeles is as marred by financial difficulties as the children it serves. Chasms continue to widen, and the social and psychological impacts of below-par schools are deeply ingrained. "We don't take our education seriously because, what's the point?" said a ninth-grader at Crenshaw High School. "We're not going to get anywhere anyway. Most of the teachers don't care and our text books are so out of date that they don't make sense."

Unless some drastic changes are made, soon, tomorrow's Los Angeles is going to be a pretty dire place to live. "The priority should be the children," said Conner. "That's the future. These are the children that we are going to need to grow up and to replace the jobs that we occupy today. And if they [receive] a mediocre education, then there are going to be a lot of horror stories in the future."

More than 80 percent of students in the LAUSD come from families who have an income below the federal poverty line. These students, who are arguably most in need of educational support, will find more reason to be despondent about their opportunities for success in the next few years. It's no coincidence that schools with the lowest average SAT scores, as listed by the Los Angeles Times, also happen to be racially diverse, low-income high schools in the poorest parts of Los Angeles, including Jordan High School (2nd lowest SAT scores in the LAUSD), Crenshaw High School (8th), and Dorsey High School (13th). The education these children receive already differs greatly from schools on the other side of the city, and with fewer teachers and resources come June 30th, that gap will only widen.

Education, then, contrary to Horace Mann's belief, in a city like Los Angeles, is not the great equalizer, but the great divider.