Bed nets intended to prevent malaria are used in fishing communities in Zambia to fish for food, which is sold in the local market, according to a report in the New York Times. The nets also trap fingerlings necessary for future stock. This decimates stocks and causes environmental harm.

The issue highlights an unintended consequence of the global effort to combat malaria, an effort that has reduced the death toll by half in the past decade.

The net distributions I have seen by the Imagine No Malaria campaign anticipated the problem of net misuse.

Before a distribution, community health workers and volunteers were identified and trained. During a pre-distribution education period, they learned how to prevent malaria, request permission to enter homes to hang nets, and explain proper use and care of nets.

Media campaigns, community meetings, fliers and word-of-mouth alerted local people to the future distribution. Communities were prepared in advance to welcome health workers and volunteers into homes. The trained volunteers hung nets and demonstrated how to use them.

As follow-up, health workers were assigned for six months to sectors to monitor net use and record the use rate. This identified issues for future distributions and reinforced behavior change practices that are critical for regular net usage. For 9 to 12 months after a net distribution, there are regular check-ups to ensure proper use and care of the nets.

In the Bo District of Sierra Leone, for example, health workers determined 98 percent of the nets were in use six months after installation. In addition, Imagine No Malaria nets were not distributed around fishing communities. The use of nets for fishing is likely localized to those communities.

In the past, nets distributed without such precautions sometimes appeared in local markets and were used for many unintended purposes. But net providers learned and adapted.

Secondary uses of netting, as with many other items, are common in many communities lacking resources.

While this doesn't mitigate the environmental harm, it does emphasize that people are using nets to get food and fish for sale. The root of the problem is food self-sufficiency and a healthy local economy.

It's compounded by lack of awareness of the harm done to fish stocks.

The story also points to the need for alternatives to nets where practical and for more education.

A greater emphasis on screens and doors in living quarters is proposed. Due to construction practices and cost, this is more practical in some areas than others.

Indoor residual spraying is practical and safe, and it is used in some regions.

Responding to the challenge

Media campaigns can encourage proper use of nets and point out the harm done by this particular secondary use. Local leaders can speak against harmful fishing and build community support for prevention.

Addressing the diseases of poverty is a complex challenge. Solving one problem can lead to others. Unintended consequences reveal themselves.

Disease, poverty, education, food sufficiency and environmental stewardship are interrelated, complex human concerns. We are challenged by them to find life-enhancing solutions.

The story points to the need for thoughtful, comprehensive development to address these interrelated issues of life and death. 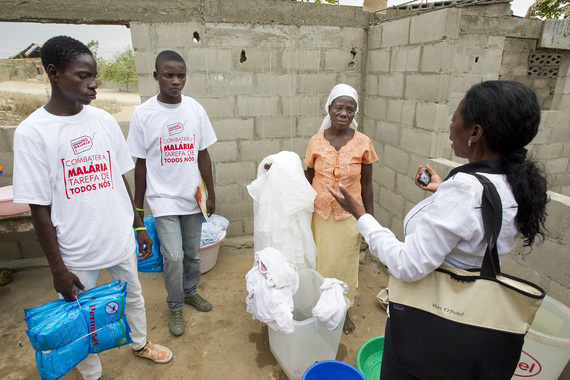 Teresa Ado Joo (second from right) learns about proper use of a bed net from Ilda Nanjembe during a 2012 distribution by The United Methodist Church's Imagine No Malaria campaign in Bom Jesus, Angola. UMNS photo by Mike DuBose.