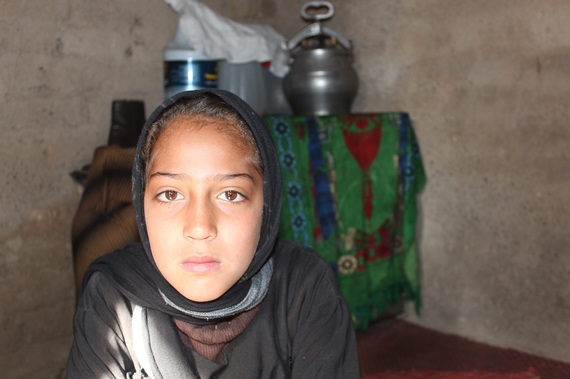 A widow with four children in the desolate, war-torn village of Herat, Afghanistan struggles to save her family. Amina's husband served in the army and was killed in a brutal battle. The government returned his clothes and identification, but offered no form of support. She works 12 hours a day for $38 a month and still does not have enough food to feed her family. What can she do? She is faced with the possibility of "selling" her eleven-year-old daughter into marriage in exchange for enough money to feed her family for a long time - perhaps years.

This is the unthinkable choice that faces many struggling Afghani women today. Daughters as young as eleven years of age can be sold for significant amounts of money. This heart-breaking practice ensures mouths will be fed. Sometimes there seems to be no other option.

Fortunately, a ray of hope in this tragic situation is emerging. Food4School is an example of a non-profit organization dedicated to helping these families. Rather than selling their daughters into marriage, mothers can receive a stipend of $60 per month, provided they commit to sending their children to school. Families monitor one another's progress and encourage consistent participation. These programs simultaneously provide better nutrition for the family and ensure that both daughters and sons attend school and receive an education.

In the past three years, grassroots organizations have identified and supported families living on as little as eighty cents per week. Statistics indicate that when children are fed, the percentage of school attendance can rise by 87%. Committed volunteers administer the program, monitor attendance, and distribute funds to the families. Most heartwarming of all, young girls have been saved from a lifetime of suffering and are now receiving an education. And this is only the beginning!

The goal is to shift the paradigm and create sustainable support that allows families to simultaneously educate and feed their daughters. In a country where 85% of all women are illiterate, it is clear that educating girls is a high priority. Research shows that when girls go to school, the very fabric of society improves. Actors Meryl Streep and Anne Hathaway say that educating young girls is one of the wisest investments of our time. Girls Not Brides states, "The less education a girl has, the more likely she is to marry during her childhood."

Forward-thinking world leaders such as Zimbabwe's Constitutional Court echo this sentiment. On January 20th they outlawed child marriage. Under this new law, girls and boys cannot marry before the age of 18. This ruling sets the precedent for other nations to take up the mantle of creating a safe and healthy world for girls around the world.