Despite a little skepticism, it still more than pays to go to school.

In fact, education has a greater effect on how much one earns over their career than does race or gender, according to a new study by the U.S. Census Bureau. Based on data from before the recession, between 2006 to 2008, the report estimates that over a forty-year career, the variation in annual earnings between the least educated (or those with an eighth grade education or less) and the most educated (those with a doctorate degree) is $72,000.

A recent study from the Labor Department drew similar conclusions, reporting that the unemployment rate for those with a college degree is around half the national average, while those with only a high-school diploma exceed it.

Still, while it pays to go to school, those benefits have recently been a bit mitigated. The Economic Policy Institute reports that the average wage of new college graduates dropped by almost a full dollar last decade.

Here is a chart showing the median annual earnings by age and educational attainment for full-time, year-round workers according to the U.S. Census Bureau: 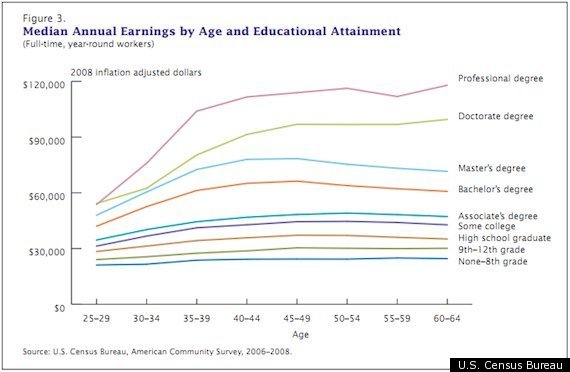