The phrase "education reform" has been co-opted to mean a narrow party program advocated by the reform establishment (mainly billionaires and their designees) that includes a barrage of testing, charter schools, and taking experienced educators out of the classroom.

None of these measures have a track record of success, but the actual facts get obscured by Hollywood films and connected charter groups. It's hard to get into the conversation when the corporate side of education reform uses the term as a bludgeon against anyone who questions its agenda -- even when the concerns are supported by research.

If we're all in this together, why can't we debate what reform should look like, roll up our sleeves and fix our schools -- together? There's a lot of work to be done and we need all hands on deck. This isn't possible unless we can actually have free and open discussion about what schools need. That means that we need to look at all of the challenges involved and tackle them directly. We even need to look at the challenge of poverty, since that seems to be the largest impediment to educational achievement. That's not to say it's a brick wall to success, it's just a crucial factor we must address.

Students in well-funded American schools from high-income families outscore nearly all other countries on standardized tests, yet our aggregate scores are low. Many call this an educational crisis. However, if we are looking at root causes, we cannot overlook the fact that the U.S. has the highest level of child poverty in the industrialized world and children living in poverty are achieving far below their affluent peers.

Schools do not operate in a vacuum. Poverty has devastating effects on a child's social and emotional development. For our poorest students, just getting to school can be a challenge. Anyone who has studied education or psychology knows the venerated "Maslow's Hierarchy of Needs," which shows the steps towards self-actualization -- the level where students can effectively use their creativity and problem-solving skills. At the lowest level are basic human needs like food, water, and health. We need to do a better job of making sure those needs are met. 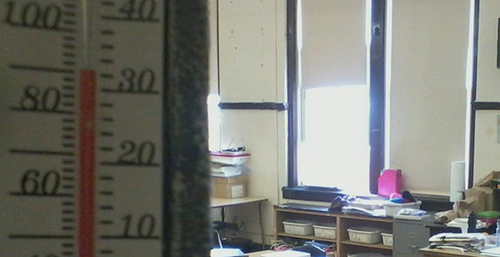 A 90 degree classroom at Hammond Elementary School on Chicago's southwest side. Photo by Garth Liebhaber.

There are some reforms we can make within the walls of a school that will ameliorate the effects of poverty including: wraparound services, small class sizes, and school libraries. This is by no means an exhaustive list of reforms we can provide to fix schools, but it's a place to start and all three have a track record of success. None of these reforms are included on the lists of the reform establishment.

For many of our poorest students, the school nurse is the only medical professional they see and in many Chicago Public Schools, nurses are stretched between 2-3 schools. Schools need to hire more social workers, psychologists, and nurses to make sure students are healthy enough to take their learning to the next level.

One country that always comes up when discussing models for education reform is Finland, a nation that boasts some of the highest test scores in the world. It is also a nation where students are provided small class sizes and the child poverty rate is 3.4% compared to the United States' 21.7%.

In Chicago, 164 public schools -- nearly 1 in 4 elementary schools and 51 high schools do not have school libraries. Library hours are typically one of the first cutbacks in city budgets, leaving many of Chicago's poorest students without access to books. This puts them at a disadvantage as access to books has shown to shrink the "achievement gap."

In this video, University of Southern California Professor Emeritus Stephen Krashen explains in detail the importance of access to books for students.


So what can civic-minded corporations do to help fix our schools?

They can start by paying their taxes, which will fund these reform efforts. That's how they show real concern for the community. If they want to do more, they can look at the model used in McDowell County, West Virginia where a partnership was forged between corporations, foundations, and the teachers union.

The partners who signed on agreed to improve housing, transportation, and jobs in the poverty-stricken county. They know all of these factors contribute to low educational achievement. Instead of pointing fingers like the rest of the reform establishment, they offered a hand.