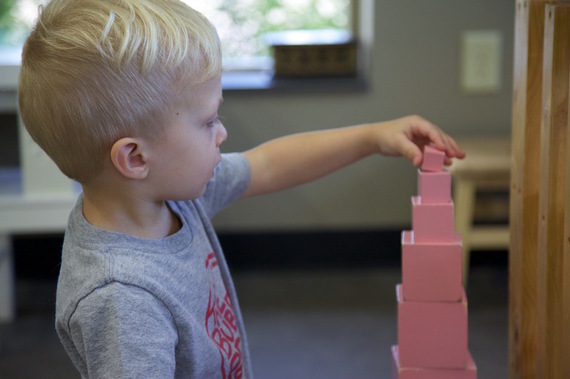 Somewhere along the way, our culture adopted the idea that learning wasn't fun - that to inspire children, we needed to entertain them. We needed to stimulate their interests and reward them for their efforts. It didn't matter if they accomplished the task, or were even inspired by the activity, just so long as they were happily entertained.

What this path misunderstands, which is a key observation that the Italian educator Maria Montessori offered, is that children are born naturally inquisitive. You don't have to force them to learn - and, most importantly, you don't have to sugar coat their successes, any more than their failures. Children inherently, one could say biologically, see the world as an opportunity to discover their interests.

Theories abound about how this shift toward what is loosely called "edutainment" happened, and how it has been fully incorporated into our cultural consciousness. As with so many things, there are more fingers to point than there probably are responsible parties - and, what follows is by no means exhaustive. All the same, it might be worthwhile to point out a few of the more extreme - social, economic, even political - examples, to help us arrive at what could be considered a modest interpretation of the origins of edutainment.

First, with the advent of television, and other forms of mass media, some claim we witnessed an unprecedented rise in consumerism. Children, once but a Wall Street oversight, were quickly understood to be the fastest way into the family pockets. From the breakfast table to the nightstand, children were suddenly promoted to a new position, that of consumer. Or, in the very least, they were a new pathway into an old way of looking at the marketplace.

Marshal McCluhan, for his part, highlighted the fact that it wasn't even so much the content, or even the consumption, that mattered with mass media. Instead, it was how children were transfixed by the medium itself. With movement and light, new medias projected upon childhood an array of perceptions by which to view the kaleidoscope of life. Shiny and bright, something was a foot.

Second, others conjectured, perhaps more alarmingly, which is not to say more seriously, that the excessive infant mortality rates at the turn of the twentieth-century directly contributed to us, as adults, lavishing our children with unabated gifts and praise, wanting to more generously shower them with our confections. If nothing else, this line of thought went, we can live with the idea that our children led happy lives, even if they are cut unnecessarily short. [It's worth noting here that while infant mortality rates continue to decrease worldwide, they are still very much a reality for many families to endure.]

In J.G. Ballard's autobiography, Miracles of Life, he tellingly writes:

"My parents had been born in the first decade of the 20th century, long before antibiotics and public health concerns for vitamin-enriched foods, clean air and water. Childhood, for families of any income, was a gamble with disease and early death. All this devalued the entire experience of childhood, and emphasized the importance of being adult, an achievement in its own right."

What this insight reveals, as a snapshot in a time that remains all-too-present for some, is that there was a sense in which the greatest accomplishment of childhood was simply - or not so simply - making it out of childhood. With this perspective, parents were more than prone to treat their children with a different set of expectations. Often, they inundated them with distractions while they toiled away to provide the resources needed for them to hopefully make it into adulthood.

Now, there's an alternative path, a third way, which may be directly related to the industrialization of education and provide an adequate solution to our inquiry. Which is to say, it may very well hold the secret to why "edutainment", or the idea that children need to be entertained to learn, became the prevailing mode of engagement with children - not only from parents, but also from our institutions.

It may signal, too, why alternative approaches to education are currently on the rise. You only need to look at Silicon Valley and the excitement around the perceived ability to disrupt the status quo. Of course, it's important to point out that new technologies, or the entrepreneurial spirit that readily supports new enterprises, are often seen as the catalyst behind such movements. But, we wonder if something else might be at work. Namely, a different and emerging value system of what is expected of children.

What are our expectations of childhood?

Here, we take a lesson from the French philosopher Roland Barthes. In Mythologies, a collection of articles written to express our tendency as a society to create modern myths based on our social values, Barthes laments, "All the toys one commonly sees are essentially a microcosm of the adult world".

His point is rather profound.

When toys are created by adults, they often betray the novelties of childhood. When toys are manufactured, with overly specific outcomes in mind, they actually limit that sense of discovery that exploration affords. (His example is actually a doll that urinates.) With the advent of industrialization, the process was deeply accelerated. One might say, exacerbated. New materials, such as plastics, introduced a colder, more utilitarian approach. One of the consequences, Barthes believed, was that we had inadvertently manufactured a new type of desire by which to entertain children.

What makes Maria Montessori so relevant to this conversation, both historically and as a contemporary, is in her attempt to find a personalized approach to learning. In the age of industrialization, her approach wasn't contrarian. It was necessary. It placed an emphasis, not on adulthood, but on the experiences of childhood. On following the interests of children, instead of trying to fabricate them through overstimulation.

If we are to take children seriously, and not just apply the model of edutainment to education, it will be with a realignment of the ways in which we think about learning itself. Ultimately, it will take all of us, and a concerted effort, to change our expectations of childhood. Maybe we can start by listening to our children.

Cofounder and CCO at Montessorium.