Every child has a right to an education. Yet millions of children are living in countries where that right is systematically violated as a result of armed conflict. It is time for the international community to stop this state of affairs by getting serious about its responsibility to protect education in all countries, irrespective of the barriers created by armed conflict.

Education seldom figures in media reporting from conflict zones. Yet the effects are devastating. In eastern Democratic Republic of Congo, where the education system has collapsed in the face of mass displacement and ongoing violence, over 1 million children are out of school. When the surge in refugees driven from Somalia by hunger and violence arrived in camps in northern Kenya last year there was no provision made for additional education. And the conflict in Yemen has pushed tens of thousands of children out of school.

Apart from violating the rights of children, failure to protect the right to education fuels the cycle of violence. One of the greatest fears of Somali mothers in the refugee camps of northern Kenya is that limited opportunities for schooling will draw their children into the ranks of al-Shabaab. You hear the same concerns among refugees from Darfur in the camps of eastern Chad.

Parents living in conflict zones make extraordinary efforts to keep alive the hope that comes with education. Sadly, the same cannot be said of the international community. Currently less than 2 per cent of humanitarian aid is dedicated to education. And it is not just a case of too little aid arriving too late. Agencies trying to provide education in conflict zones have to secure their funding through unpredictable annual appeals processes, where money tends to follow the most recent wave of media interest -- and where children living in long-running conflicts are seen as yesterday's news. 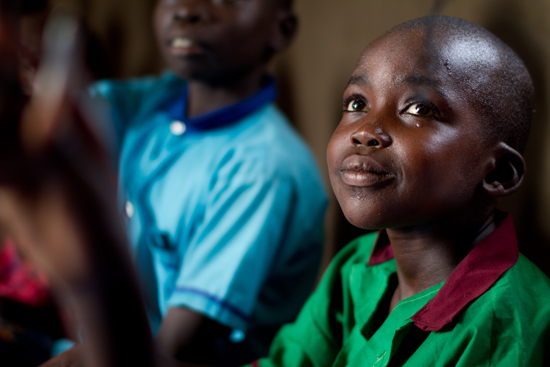 A boy listens to his teacher during a lesson at the improvised Hai Kugi School on the outskirts of Juba, South Sudan. © UNESCO /M. Hofer (2011)

South Sudan is the latest country to demonstrate the inadequacy of the current aid architecture for education. In 2005, when a peace agreement ended a brutal 21-year civil war, hopes for a better future were running high. Seven years on, much has been achieved. More than half a million children have entered education for the first time. Child death rates have fallen by 20 per cent. There have also been improvements in immunization, nutrition and access to clean water.

Yet despite the progress that has been made, over 80 percent of South Sudan's population lives on less than $1.25 a day. The country has the highest maternal mortality rate in the world. Half of primary school age children are out of school, and just 400 girls make it through to the last grade of secondary school. In fact, girls are more likely to die in childbirth than they are to make it through primary school.

With tensions running high, it is now critical that both sides in Sudan draw back from the brink of conflict and resolve their differences. But South Sudan also needs support for reconstruction. As an all-party committee of the United Kingdom's parliament noted in a report this week, if South Sudan is to develop as a prosperous peaceful nation "it will need to invest in health, education and infrastructure." Nowhere is this more evident than in schooling. South Sudan's parents have demonstrated extraordinary resolve, innovation and ambition in attempting to get their children into school. Their efforts are inspiring and humbling in equal measure. Schools for their children was the most important demand of parents crossing as refugees from the old Sudan into the new South Sudanese state. Unfortunately, the same cannot be said of the international aid community.

Since the peace agreement, aid for education has arrived in an uncoordinated trickle. The Global Partnership for Education, which operates under the financial auspices of the World Bank, has yet to put a program in place. Most bilateral donors are operating on a small scale. To make matters worse, there is now talk of cutting back on long-term development assistance and transferring aid into short-term humanitarian budgets.

This is the last thing that South Sudan needs -- and there is an alternative. In a report published today, I set out the case for an 'education catch-up' plan aimed at extending learning opportunities for 2.5 million children by the end of 2015. The cost: around $400m annually over the next four years. Around half of this amount could be co-financed by the World Bank and the Global Partnership for Education (GPE) -- and the IMF-World Bank Spring meeting in Washington DC this week-end provides an opportunity to set the wheels in motion.

Some people will doubtless argue that getting all of South Sudan's children into school in the current climate is 'unrealistic' and that we should wait until the threat of war has receded.

But where is the 'realism' in denying a whole generation of children the chance of an education that could transform their lives? And why waste an opportunity to build an education system that could spur growth, create jobs, and nurture the attitudes on which a peaceful future depends?

When it comes to education, there should be no borders -- only rights. Organisations like the Red Cross and Medicine Sans Frontieres do not recognise borders in the provision of health care. Yet when it comes to education, the international community's commitment to the rights of children is weakest in precisely those conflict-affected states where support is most urgently needed. That is why I have been calling for the creation of a new type of initiative -- Education without Borders -- that will work to support and deliver education for children trapped-in conflict zones, and for those forced to flee their homes as displaced people and refugees.

We need to stop viewing education as part of the collateral damage that comes with conflict. We know that education gives children their best hope of escaping poverty. And we know that education -- especially of young girls -- can act as a catalyst for progress in other areas, such as nutrition, child survival and combating infectious diseases. For children trapped in conflict, education can help to create a sense of normality and keep alive the hope of a better future.

Never again should the right of a child to education depend on boundaries set by geography or conflict.

These children need our help -- and they need it now.

To learn more about the campaign to get 1 million children in South Sudan in school, please visit The Office of Gordon and Sarah Brown.