On Tuesday, the day before he announced his support for Barack Obama, former Senator John Edwards launched a campaign to cut the nation's poverty rate in half in the next ten years. You can be excused if you hadn't heard about it. Only one major daily newspaper -- the Philadelphia Inquirer -- covered the event, which took place at a Baptist church in North Philadelphia. (Larry King on CNN, Matt Lauer on the "Today Show" on NBC-TV, and Michele Norris on NPR interviewed Edwards about the topic in recent days, but they were more interested in whether he was going to endorse Obama or Clinton).

Edwards' endorsement of Obama, which took place in Grand Rapids, Michigan, is certainly major news. But the complete failure of the media to cover Edwards' anti-poverty event tells us a great deal about what the journalistic establishment considers important.

When Obama and Hillary Clinton made their pilgrimages to Edwards' home in North Carolina in February to solicit his endorsement, he told them he wanted to see their campaigns pay more attention to poverty. At the Philadelphia event, Edwards -- along with representatives of the community organizing group ACORN, the Center for American Progress, Coalition on Human Needs, and the Leadership Conference on Civil Rights -- launched what they called the Half in Ten campaign. Edwards said he wanted the candidates to commit themselves to the goal of reducing poverty in half within ten years. (At the endorsement event the following day, Obama embraced the Edwards proposal.) 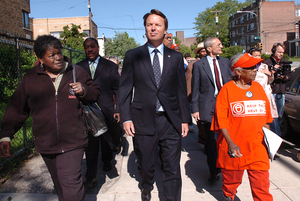 of the Center for American Progress and former

In 2006, 36.5 million Americans -- 12.3 percent of the population -- lived on incomes below the official poverty line -- about $20,400 for a family of four. Few media stories point out that among the world's affluent nations (primarily Canada, Japan, Australia, and the countries of Western Europe), the U.S. has the highest poverty rate (more than twice that of many European countries) and by far the widest gap between the rich and poor.

The number of Americans in poverty has increased by almost 5 million since George Bush took office. And if the poverty threshold was raised by 25 percent -- to $25,555 for a family of four -- which many economists think is a more realistic figure, the number of Americans in poverty would increase to almost 50 million, about 17 percent of the population.

More than a third of America's poor are children under 18. A growing number of the poor are working in low-wage jobs. A declining proportion of those jobs provide health insurance.

After his defeat as John Kerry's running mate in the 2004 election, Edwards created a center on poverty and work at the University of North Carolina. He began criss-crossing the country speaking at union rallies, joining picket lines and campaigns to raise the minimum wage and visiting homeless shelters, low-income housing developments and emergency food banks -- hardly the typical path to the White House.

When he announced his campaign for president, he did so in an impoverished area of New Orleans, a neighborhood hard hit by Hurricane Katrina. During his presidential campaign, which ended nearly four months ago, he tried to shine a spotlight on poverty. As one of the leading candidates for his party's nomination, Edwards was able in July to get reporters to follow him on a three-day, eight-state, 1,800-mile poverty tour that included stops in New Orleans, Kentucky, Mississippi, Cleveland and elsewhere.

Many of the stories that came out of that tour focused on the human side of poverty, and on the candidate's policy ideas. But others reflected journalistic cynicism, viewing Edwards' anti-poverty crusade as simply a political gambit to grab attention. They failed to mention that none of the eight states on Edwards' poverty tour were among the key early primary states that would make or break his bid for the White House. Newsweek reporter Jonathan Darman wrote that Edwards' calls to reduce poverty "sound like more empty promises from a politician."

No longer a politician, Edwards this week called poverty "a moral cause facing every single one of us" in the United States. "What we do for each other says something about who we are," Edwards said, speaking at the Thankful Baptist Church. "It says something about our character."

The last time the U.S. committed itself to dramatically tackling poverty was during the early 1960s.

At the time, progressives like Rev. Martin Luther King and United Auto Workers union president Walter Reuther advised Presidents Kennedy and Johnson to champion a bold federal program for full employment that would include government-funded public works and the conversion of the nation's defense industry to production for civilian needs. This, they argued, would dramatically address the nation's poverty population, create job opportunities for the poor and the near-poor (including blacks living in America's ghettos), and rebuild the nation's troubled cities without being as politically divisive as a federal program identified primarily as serving poor blacks. We often forget that the theme of the 1963 March on Washington-- at which King made his famous "I Have a Dream" speech and which the UAW backed with both money and marchers-- was "jobs and justice."

Johnson's announcement of an ''unconditional war on poverty'' in his 1964 State of the Union Address was, in reality, a patchwork of small initiatives that did not address the nation's basic inequalities. Testifying before Congress in April 1964, Reuther said that ''while [the proposals] are good, [they] are not adequate, nor will they be successful in achieving their purposes, except as we begin to look at the broader problems [of the American economy].'' He added that ''poverty is a reflection of our failure to achieve a more rational, more responsible, more equitable distribution of the abundance that is within our grasp.''

Despite these valid criticisms, the programs Johnson and Congress put in place in the 1960s bore fruit. Indeed, the nation's War on Poverty, which President Johnson launched in 1964, was making steady progress until it was detoured by the other war-- in Vietnam. In 1960, when Kennedy was elected, 22 percent of Americans lived below the official poverty line. By 1968, that number had dropped dramatically, to 12.8 percent-- a result of a combination of general economic prosperity and anti-poverty policies like raising the minimum wage, creating public works jobs, providing job training programs, raising Social Security benefits, and launching Medicare and Medicaid. By 1973, the nation's poverty rate had fallen to 11.1 percent, an all-time low.

Since then, poverty has increased, but now the dilemma of poverty is linked to the broader problem of widening inequality and declining living standards for the middle class. In contrast to the 1960s and early 1970s, when the rich, middle class and poor all shared in the nation's prosperity, America today has the biggest concentration of income and wealth since 1928. Headlines about outrageous compensation packages for corporate CEOs have focused attention on the concentration of wealth at the top. The share of income going to the richest 1 percent of families has doubled since 1980, while their federal tax burden has fallen by a third. Meanwhile, a growing number of working families are now in debt, while the number facing foreclosure has spiraled. American workers face declining job security and retirement security. College tuition is increasingly out of reach, while government aid has shrunk. The cost of housing, food, gas, health care, and other necessities is rising faster than incomes. Between 2000 and 2007, median weekly earnings increased by 0.6 percent, while the cost of a typical home grew by 72.2 percent.

Starting in the 1970s, an effective business-sponsored rightwing attack on "big government" social spending, and efforts to stereotype the poor as lazy welfare cheats, undermined support for policies to help lift people out of poverty. Americans are now tired of Bush's noblesse oblige prescriptions for addressing poverty -- like encouraging people to donate to charity and volunteer at homeless shelters and soup kitchens. They want a new social compact that requires people to work, corporations to act responsibly, and government to protect people during tough times with a stronger safety net.

Polls also show that support for labor unions has reached its highest level in more than three decades. Since welfare reform was enacted in 1996, Americans have viewed poverty primarily through the prism of working conditions. A few years ago, surveys revealed that a vast majority of Americans wanted to raise the federal minimum wage, which had been stuck at $5.15 an hour since 1997. After they won a majority in Congress in 2006, the Democrats hiked the federal minimum wage to $7.25, still below the poverty line, but an improvement.

The popularity of Barbara Ehrenreich's book about the working poor, Nickle and Dimed, and TV shows like The Wire, as well as the growing challenges to Wal-Mart for its low-wage policies, and the remarkable growth of the "living wage" movement (about 200 cities have now adopted such laws) reflect an upsurge of concern that America is in the midst of another Gilded Age-- a concern bubbling up from the grassroots, and just now surfacing in our national political life. But most of the media are entirely out of touch with these sentiments and with a burgeoning activist movement for reform.

Until Obama gets elected -- and perhaps appoints Edwards as his poverty czar-- it appears that the new grassroots war on poverty won't be televised.

Peter Dreier is professor of politics at Occidental College in Los Angeles and coauthor of Place Matters: Metropolitics for the 21st Century and The Next Los Angeles: The Struggle for a Livable City.

More Memphis Officers To Be Disciplined Over Tyre Nichols Arrest