This guy definitely has a type.

Edwin Tobergta, 35, was arrested in Hamilton, Ohio on Wednesday for allegedly having sex with an inflatable pool raft by the side of the road, Fox 19 reports. This is the fourth time Tobergta has been arrested for this kind of offense.

In 2011, Tobergta was caught with his pants down in an alley with his neighbor's pink, inflatable raft.

He went to jail, but was arrested again in 2013 for having sex with the EXACT SAME RAFT, which had inexplicably not been thrown out. The 2013 offense occurred at Tobergta's own home, but he was charged with -- and pleaded guilty to -- public indecency because it happened within the view of children during the day.

It is unclear if Tobergta's most recent alleged offense took place with the same pool raft.

In 2002, Tobergta was arrested for publicly pleasuring himself with an inflatable pumpkin. That object wasn't a pool toy, though, because come on, a man needs a little variety.

In his newest mugshot, Tobergta is wearing a T-shirt that reads, "I'm out of my mind. Please leave a message." 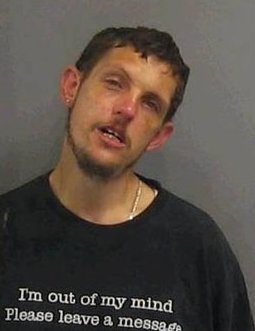