You've Got the Munchies, Physiologically Speaking
Why: You know how marijuana makes you want junk food really badly? The same thing happens when you're not sleeping enough. In both cases, levels of a compound that triggers that must-eat-now feeling rise—they were 33 percent higher in subjects who got only 4.5 hours of sleep for four nights straight, compared with well-rested people, found a study in Sleep. The result? Sleepy folks were a lot less likely to turn down snacks like cookies, candy and chips, even though they'd eaten a big meal a couple of hours earlier. On top of that, there are a lot of other ways sleep loss messes with your eating habits and weight, some of which you probably already know. (It increases levels of the hormone that tells you to keep eating and decreases levels of the one that says you're full, it makes unhealthy foods even more appealing and makes you more likely to store fat).

You Book a Flight to the Bahamas—in the Middle of Hurricane Season
Why: Your judgment and decision-making skills are skewed. Brain imaging shows that when you're sleep-deprived, you're more excited by potential rewards (lounging on the beach, a good book in one hand and a margarita in the other) and less concerned with losses (a canceled flight and a hotel that doesn't do refunds—and no, you didn't get trip insurance).

You Look 10 Years Older
Why: During sleep, blood flow to your skin increases and your body produces compounds like collagen and elastin. A lack of shut-eye means less of those three and a complexion that may look dull and dry (less blood flow means less fresh cells and nutrients being delivered) and more wrinkly (collagen and elastin help maintain skin elasticity and plumpness). If you deal with acne, eczema or psoriasis, the higher-than-normal cortisol levels from a lack of sleep can make that worse too. And those dark circles you're seeing in the mirror? Poor blood flow is causing blood to collect underneath your eyes, which, thanks to the thin skin in that area, is very visible.

You're Really Bad at Reading People
Why: When you're sleep-deprived, angry faces don't look as mad as they would if you were well rested, and happy faces seem less chipper, suggests research in Sleep. It's not just your ability to tell how ticked off your friend is that you're 20 minutes late for coffee (hint: very) that's less than optimal. You're also not displaying your own emotions as strongly as you normally do (so your apology might seem a little phoned-in).

You're Telling Off Oblivious Subway Riders and Letting Your Horn Do the Talking at Terrible Drivers
Why: There's an area of your brain that's responsible for knee-jerk emotional reactions (in this case, the how-dare-you-accidentally-step-on-my-foot-or-cut-me-off variety), called the amygdala. Normally, your prefrontal cortex overrides that reaction, essentially telling your amygdala to chill out because whatever just happened isn't that big of a deal. That doesn't work so well when you're sleep-deprived. After getting four hours of sleep for five nights in a row, subject's amygdalas were about 60 percent more reactive to things meant to make them mad or sad. Meanwhile, communication between the prefrontal cortex and the amygdala broke down. Real-life translation: You're more likely to say or do something you typically wouldn't.

You're a Few Beats Behind Everyone Else in Your Dance Cardio Class
Why: It's not just because you're tired. Several weeks of sleep loss slowed subjects' reaction time almost tenfold, one study found.

You're Nodding Off, but for Such Short Time Periods That You May Not Notice
Why: You're experiencing lapses, tiny bouts of sleep that are often so short, researchers need special equipment to pick up on them. They can happen after one night of no sleep or repeated nights of not-enough sleep, and if you continue to get less-than-ideal slumber, lapses can progress to sleep attacks (it's a clinical term—really) that last longer and could put you in danger (e.g., falling asleep at the wheel).

You Dread Monday Morning Even More Than Usual
Why: Your brain is a pro at anticipating unpleasant events and emotions—that's why you get the Sunday-night blues just thinking about going to work on Monday. Sleep loss amplifies that effect, according to a small study in the Journal of Neuroscience, in which researchers found that brain regions involved in anticipating potentially bad experiences were more active in people deprived of sleep.

You've Got Increased Levels of That Thing We're Always Telling You About
Why: Getting just two hours too little sleep each night for a week leads to low-grade inflammation, according to an analysis in Sleep Medicine Reviews. If it continues, that puts you at risk for insulin resistance, diabetes, and it makes your immune system less effective at responding to invaders.

Expert Sources
- Charles Czeisler, MD, chief of the division of sleep and circadian disorders at Brigham and Women's Hospital
- Dianne Augelli, MD, assistant professor of medicine at the Weill Cornell Center for Sleep Medicine at NY-Presbyterian Hospital
- Michael Grandner, PhD, director of the Sleep and Health Research Program and assistant professor of psychiatry at the University of Arizona
- Rafael Pelayo, MD, clinical professor of psychiatry and behavioral science at the Stanford Center for Sleep Sciences and Medicine
- Sejal Shah, MD, board-certified dermatologist in New York 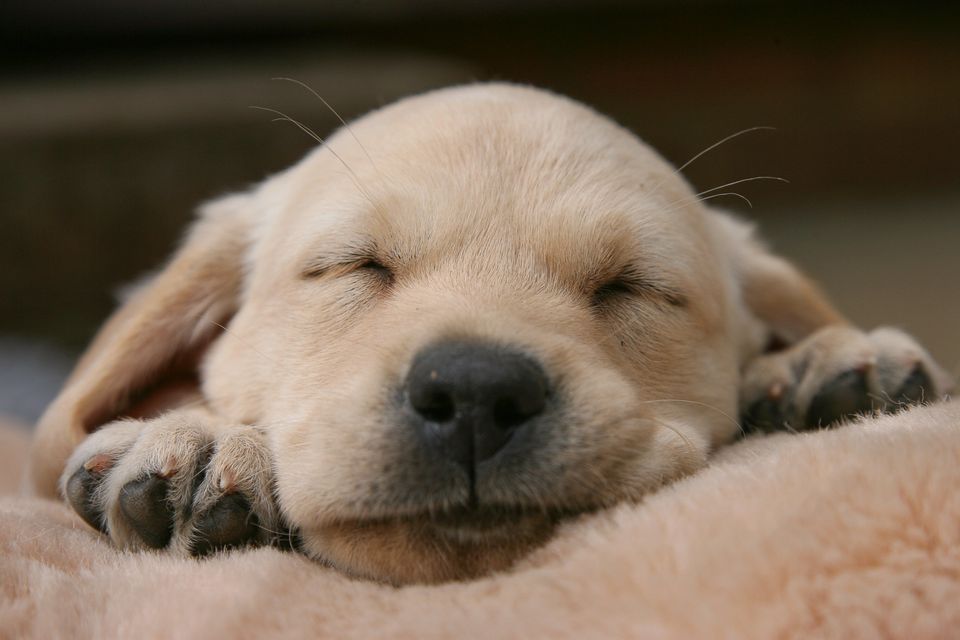 1 / 5
Play with your pet before bed.
Nick Ridley via Getty Images