Crowdfunding has been thought as the panacea for all aspiring entrepreneurs. Sites like Kickstarter have helped ordinary people raise money for novel inventions to upwards of 8 million dollars for games such as Exploding Kittens. Fellow independent game designers are starting Kickstarter campaigns left and right. I was interviewed by a prominent blogger who was shocked that I had not started a campaign before now. Headlines such as those in The Wall Street Journal recently spread the word that crowdsourcing is now for women entrepreneurs as well.

But the data proves otherwise, particularly for women creating games.

In a study of all Kickstarter and Indiegogo campaigns from 2009 - 2012, researchers found that while women were slightly more successful at reaching their goals in crowdfunding, they also asked for much less money. Single female entrepreneurs asked for a mean of $6,890 while single males asked for nearly double that -- $12,175.

Games, from digital games like Double Fine's digital Adventure to Sandy Petersen's board game Cthulhu Wars, are among the top funded projects on Kickstarter. Kickstarter campaigns are raising more funds for tabletop games than their digital counterparts. Yet very few women are funded for their games across any media.

From tabletop to digital, gaming is still perceived to be a male-only domain. This is not truly the case. Adult women in 2014 constituted about half of all digital gamers -- a larger market segment than teenage boys. The board game industry is changing too. Board game sales were up "by a double digit percentage" on Amazon in 2014, but there is little mention of a demographic shift. 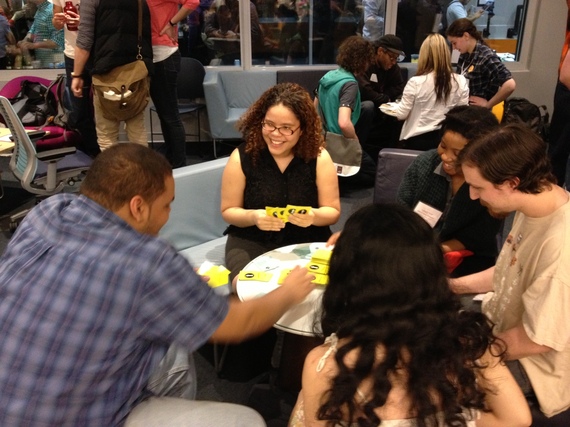 While women were instrumental in the history of board game design and continue to be active today, just a few contemporary games are designed by women -- think Set, Jenga, and Quirkle. Game publishing remains male dominated, even in family-friendly genres.

Why do fewer women instigate game crowdfunding projects? Games, both digital and analog, have by far the fewest female investors in any project category on Kickstarter. Less than 8 percent of all of the crowd funded game projects from 2009-2012 were launched by women: men launched 67,000 game projects while women launched 7,000, and only 17 percent of all game backers were women.

This seems strange at a time when women are playing more games than ever before: 53 million women play Candy Crush Saga every day. Women constitute nearly 30 percent of League of Legends, Grand Theft Auto, and World of Warcraft (WoW) players. Even grandmothers are playing WoW now. The average female player has been at it for 13 years, well before Angry Birds were hurled at pigs.

All of this background data hits home with my own experience of running a Kickstarter campaign for a forthcoming game, MONARCH, where players play as siblings and heirs vying for the throne. The game is unique in that it positions the players as sisters, involves novel content and game mechanics, and is created by a female team. MONARCH comes out of a desire to make a fun game while also fighting 'pinkification' in toys.

Most games in the stores are designed by men. So far, publishers don't have a problem with that. In fact, a large board game publisher recently told me that MONARCH's female characters make the game "unsuitable for players, especially gamers." Such publishers-as-gatekeepers are misguided. In this day and age, players have seen it all, and playing as female characters is not part of a strange 'taboo.' It's just fun.

Things will not improve unless we address how games are created, funded and distributed. The idea that anyone can get their voice out there and fund their ideas through crowdfunding seems like the best way around the roadblock. Crowdfunding looks great until you see the demographics about who is empowered to participate. We need more women pitching their ideas, and more women looking to crowdfunding sites like Kickstarter to support the kinds of products they hope to have for themselves, their kids, and their friends.

Barriers are coming down the game industry for women, and crowdfunding could be a great way to accelerate that phase change. I believe we can expand what games are, and who funds them, if women step forward with their ideas. Whether it's 'gamers' or those new to digital games or board games, players are ready for interesting game mechanics, for complex, strong female characters, and for play styles that are approachable for a wide audience. The time is now to invent what games can be, and who makes them.

New inventions come from new voices. Send a message to young women that it is possible to pursue a dream of being a game designer -- especially with a little help from friends through crowdfunding. Find and back a game made by a woman, and fund the next wave of gameplay innovation in the 21st Century's art form.