Despite all of the hype, egg freezing isn't a fool-proof plan for women hoping to stave off motherhood while they climb the corporate ladder.

The multimillion-dollar egg-freezing industry is touting the expensive and invasive procedure as an insurance policy for career-focused women looking to have children later in life.

And earlier this week, Facebook and Apple were applauded for offering to pay the costs for employees who opt to freeze their eggs. NBC News, which first reported that story, called it a "game-changing perk."

The reality is, the chances of a frozen egg turning into a newborn baby are relatively slim. And the likelihood of success decreases as the age of the patient goes up. That means the women most interested in egg freezing, those who are older and feeling the most pressure of their biological clock, are least likely to have a baby via egg freezing.

Young women, whose eggs are most optimal for freezing, aren't seeking out the procedure.

"Most women who want elective egg freezing present themselves at not an ideal age," said Dr. Kutluk Oktay, a professor of obstetrics and gynecology at New York Medical College who is a co-author of an analysis of several studies that included 1,805 patients who froze their eggs. 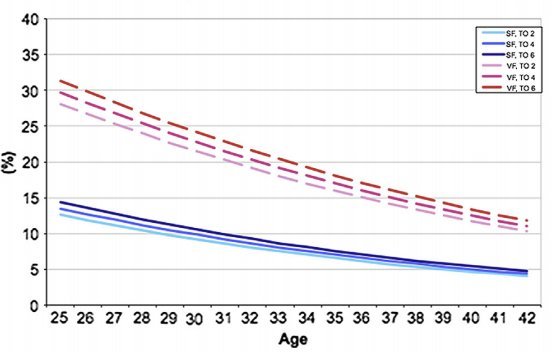 The chart above shows the decline in the share of live births that result from egg freezing as the age of the individual at the time of freezing increases. The different colors of lines indicate the different numbers of eggs that were saved.

Still, that hasn't stopped the media, egg-freezing startups, fertility clinics and now implicitly Facebook and Apple from touting egg freezing as a remedy for women who don't want to take time out of an ascendant career to start a family.

After all, there's money to be made off the insecurities of women.

The fertility industry, which includes egg freezing, in vitro fertilization, diagnosis, medication and other services, brought in $1.6 billion in revenue last year, according to data from IBISWorld, a market research firm. Women over 35, the age at which fertility starts to really drop off, made up 58 percent of that market. The industry is projected to grow by 4.1 percent annually, on average, over the next five years, with much of that growth coming from egg freezing.

The process, which can cost thousands of dollars, including storage, medications and in vitro fertilization when the woman is ready to use the eggs, often isn't covered by insurance.

"We're doing these things that provide them with options," and ultimately it's up to women themselves to determine whether it's right for them, said Robin McCarthy, vice president of marketing at EggBanxx, a company that aims to help women find discounts on freezing services. The company, which also hosts promotional "egg-freezing" parties, notes on its site that women should freeze their eggs as early as possible to increase their chances of success.

And McCarthy notes that plenty of doctors operate on a for-profit basis and that patients seeking to freeze their eggs typically understand the provider is making money off the service.

However, the marketing around freezing is far more fraught then around, say, dermatology. Egg-freezing companies are selling a narrative about how smart, career-focused women should live their lives, notes Tanya Selvaratnam, author of "The Big Lie: Motherhood, Feminism and the Reality of the Biological Clock."

"The language of liberation and empowerment is twisted in order to sell women products or services that might not necessarily result in success down the road," said Selvaratnam, who has criticized egg-freezing parties in the past.

Selvaratnam cites her own experience as proof of the possible financial conflicts of interest involved in helping women freeze their eggs. When she was 40, Selvaratnam inquired with her doctor, who works at a public hospital, about whether it would make sense to freeze her eggs. Selvaratnam said the doctor told her, "I can take your money and run," but instead showed her the probabilities for a live birth, which at her age turned out to be pretty low.

The stakes are also especially high because, in some cases, women are betting on the procedure, even before fertility becomes an issue for them, said Seema Mohapatra, a law professor at Barry University whose recent paper on egg freezing was published in Harvard Law & Policy Review.

"You are a healthy person anticipating that you might become infertile if you wait too long," she said. "That's where the promise comes in: Before this is even an issue, I'm going to prevent this from happening."

Mohapatra argued in her paper that one way to help women make a well-researched choice about whether egg freezing is right for them is to require informed consent, a designation which would force doctors to give more information than simply the risks and benefits of the treatment. Even with comprehensive details about the odds of success, many women would probably still elect to have the procedure, she said.

But in many cases, doctors are especially careful to talk success rates with women because they don't want to be blamed if it doesn't work, said Sarah Elizabeth Richards, the author of "Motherhood, Rescheduled: The New Frontier of Egg Freezing and the Women Who Tried It." It's possible employers' tacit encouragement of the procedure offers a higher risk for a possible conflict of interest, she said.

"Are employers going to be in the same situation, where she gave her best years to her company and then the eggs didn't work?" Richards asked. She added that there's a danger egg freezing could become part of company culture, with women feeling pressure to do it if they want to get ahead, regardless of the relative odds of success.

"Because you don't know how this is going to turn out, it's like a gamble," she said.