Since the earliest times, the egg has been humanity's obvious and essential symbol for the significant atmosphere of the vernal season: birth, fertility, growth, eternity. The purely primal power, which comes from the handling of eggs at the equinox, has been a principle influence on many popular spring ritual practices throughout time and across culture.

Eggs dyed red as the womb were given as gifts at the spring festivals in ancient Egypt, Persia, Greece and Rome. Greeks still toast each other at the family Easter dinner by tapping hard-boiled red eggs, one person to the next around the table. The egg that survives the clinking go-round uncracked brings luck for the year to the person who holds it.

Ancient Chinese custom maintains that standing a raw egg on its end at the first moment of spring promises good luck for the rest of the year. Modern Iranians, like their Persian ancestors, exchange red eggs for blessings of luck at Narooz, the Spring Equinox, also celebrated as the New Year.

The Spring Equinox has long been observed as the start of a new year throughout much of the world, which only makes sense. New life. New beginnings. New season. New Year. It is such a natural correlation. The spring, when birds lay their eggs, when plants and animals are born, when all of nature is refreshed, replenished, renewed, is a perfect time to begin a new year. March 25 was celebrated as New Year's Day in America as late as 1752 when Great Britain and her colonies adopted the new Gregorian calendar, which declared that, henceforth, January 1 would be the new New Year.

A common way to bless the New Year was to consecrate the bare earth with rituals to ensure fertility, growth and abundance for the next cycle. As long as 6,000 years ago, folks in the Mediterranean region rolled eggs on the soil at the Vernal Equinox to fructify the fields in the name of Eostre, the Great Goddess of Living Spring.

The pagan peasants who lived and worked on the land kept the practice of egg rolling alive in Europe until fairly recently, and it is still practiced in the United States in the form of a public egg-rolling event on the White House lawn hosted each spring by the First Lady. The ceremony has not changed a bit since it was performed in Mesopotamia in honor of the goddess Eostre. Little does this modern priestess realize that she is perpetuating an ancient heathen fertility rite!

Vital evidence of the veneration of Eostre is very much etymologically evident and alive to this day. From the name Eostre, we derive the scientific terminology for the female hormone and sexual cycle, which allow for the production of eggs: "estrogen" and "estrus." From Eostre also come the names "Esther" and "Easter."

Jews honor Queen Esther, the heroine of Purim, by eating hamentashen, triangular-shaped cakes filled with poppy seeds -- a graphic primal representation of the fertile female triangle heavy with eggs. At Easter, Christians rejoice over the resurrection, the return to life after death of Jesus, which mimics the rebirth of nature in spring after the long death of winter. Central to this pagan Pascal celebration is the cooking, decorating, playing with and eating of eggs.

For the past 39 years, I have conducted a public Vernal Equinox ritual in New York City to usher in spring with -- what else? -- eggs! The event is astonishingly simple. A crowd gathers. An orange laundry basket containing 360 eggs is passed around. We count down the minutes to the equinox. And when the time is right, we stand up our eggs in unison in salute to spring. Eggs On End: Standing On Ceremony is every bit a traditional vernal fertility ritual, a popular contemporary celebration of the return of green growth and light after the stark dark winter. Stood at the first moment of spring, the egg becomes the symbol of a new season, the birth of new life.

It is immaterial whether or not the egg can stand at any other time of the year, as some critics have argued. The important thing is to recognize the symbol, the season, the sky and the kindred souls who surround us. To feel the power of participating in a cosmic phenomenon. Standing an egg on its end, feeling it as the yolk shifts inside to find its perfect point of balance, is like holding the entire universe in the palm of your hand. Cynicism magically disappears in the process of sincere participation. And, like the buds and the birds, of early spring, we, too, are refreshed and renewed. 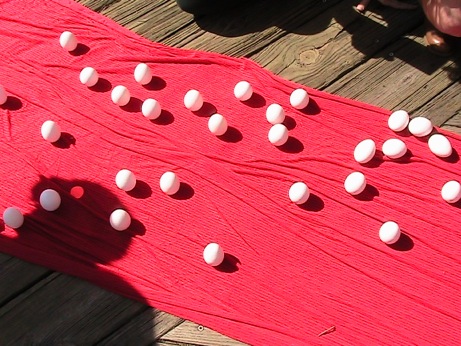 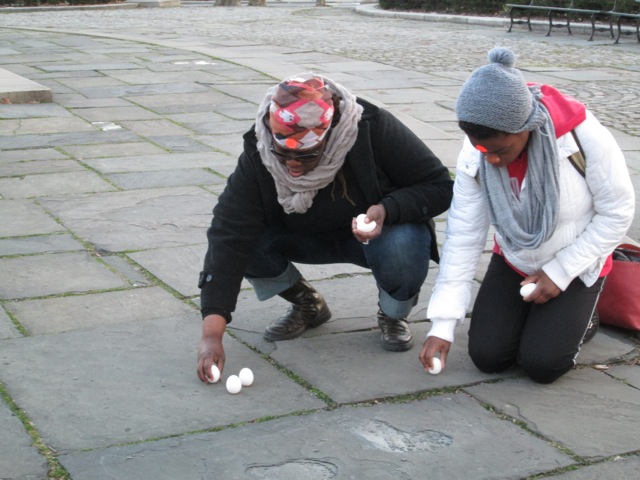 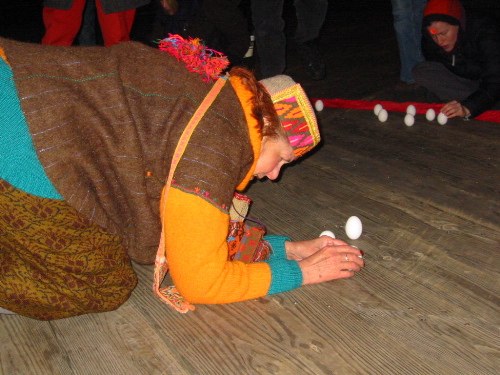 For the 39th Annual Vernal Equinox Celebration
Eggs On End: Standing On Ceremony

Global Egg Stand!
If you cannot come to this event in person, do do join us in spirit by standing up an egg wherever you are. Remember to translate the time into your local time zone.

Please send me a picture of your Egg On End along with your name and location.