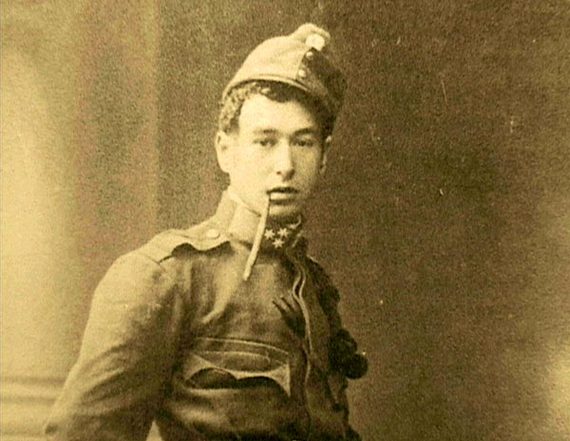 'Who saw them shooting?'
'The Captain and 10 men."
'Did they see it for sure?'
'Yes.'
The five peasants immediately had to get on their knees
behind a bank, and the bullets of a squad banged against
them. The youngest looked barely 15 years of age.

The date in the diary is Sunday, August 16, 1914. The attack on Serbia by Austro-Hungarian Forces had only commenced four days previously. The keeper of the diary was 29 years old Egon Erwin Kisch, an Austrian soldier in the 11th Imperial and Royal Infantry Regiment. He noted this execution prosaically as he also noted that on the same day an ensign in the regiment, befallen by raving madness, had to be disarmed and restrained en masse, spewing white foam and screaming: "Here are the Serbian Dogs!" On that Sunday he additionally observed an Austrian gunner tearing off his clothes while rabidly screaming--"psychological casualties" the diarist dryly noted of these events.

The diary first published in an abbreviated version in 1922 under the title A Soldier in the Prague Corps and in its entirety in 1929, entitled Kisch, write that down, Kisch! (re-published in a new German edition, February 2014), is one of the most unsparing and brutally honest battlefield accounts of the First World War. Egon Erwin Kisch's background as a journalist and investigative reporter made him an astute observer of what Wilfried Owen called "the pity of war" and a sober raconteur of the banality of army life. His post-war fame as the "Raging Reporter" was already pre-shadowed by his perceptive observations of military propaganda, the social and ethnical hierarchy of the old Austria, and the overall war effort of the Central Powers.

Prior to the war, Kisch had already made a name as a local reporter in his native Prague with revealing accounts of the lower classes and stories on everyday city life for the German-language daily, Bohemia . His gained widest acclaim when he helped uncover the infamous attempts by the government to cover up the espionage activities of Austrian Colonel Redl, a spy who revealed secrets to various foreign governments.

It was also Colonel Redl who was partially responsible for the misery of Kisch and his Czech regiment, the Prague Army Corps and the entire Austro-Hungarian Army in August of 1914. Redl sold Austria's top secret mobilization and deployment plans to the Russians, who in turn shared the documents with their Serbian brethren with devastating effect -- the old peacetime army of the empire was essentially wiped out in its entirety by the end of that same year.

The Serbian campaign of 1914, the opening shot of the First World War, was marked by immense brutalities committed by both warring parties with thousands of maimed, and disfigured military and civilian casualties in the first few days of the war. The banal Austrian propaganda rhyme "Serbien Muss Sterbien!" (Serbia must die!) was characteristic of the simple but ruthless attitude of many soldiers engaged fighting in the Balkans (Serbia would loose 60 percent of its male population during the war). In the midst of this murderous cauldron corporal Egon Erwin Kisch tried to faithfully document the punitive expedition of Austria against the "Serbian mutton thieves" as the Austro-Hungarian propaganda referred to the inhabitants of the South Slavic Kingdom. Later he would chronicle the war on the Eastern Front against the Czarist Empire.

The fact that Kisch was constantly scribbling away did not go unnoticed among his fellow soldiers. As Kisch states: "When a comrade was killed in action, and all praised him, then they told me: 'He was a fine fellow. Write that down Kisch!' When one received his rum ration, or someone went to the latrine: 'Napis to Kischi!'" (Kisch served in a regiment that was composed of 80 percent Czech and 20 percent Austro-German soldiers -- not unusual for an army that comprised 11 different nationalities, hence the request in the Czech language.)

The timespan of the diary is only a few months (July 1914 - March 1915), yet he manages to paint a vivid picture of the cataclysmic events unfolding around him. In one instance he comments on the aloofness of the aristocratic officers: "One believes to be strolling on the Grabenpromenade in Prague. In front of the Corps Headquarters and the hotel you could see almost all members of the Bohemian aristocracy: Lobkowitz, Schoenborn, Thun, Windischgraetz, Schwarzenberg, Lazansky, Kolowrat, Ringhoffer." He almost callously describes reprisals: "They hanged the station master, because he signaled to the Serbs the departure of the trains." He describes the burial of fellow soldiers: "Yesterday, Leutnant Dr. Thorsch was buried, today Colonel Bischitzky and Ensigh Ferda were interned... one did not even bother to look at the ensign's dog tag on which one could have read that he was of the Mosaic faith, in which case they would probably would not have put a cross on his grave." He tells of the the sight of a deadly stricken friend: "Ensign Frank is carried past me on a stretcher, shot in the gut. I approach him: 'Greet me Prague'--'I will not make it to Prague,' he sighs." He observes the absurd horrors of war:

I am in charge of a patrol to our neighboring company on our left and ask a private for directions... almost simultaneously soil bolts into my mouth and my eyes. When I am able to see again, I see the carcass of the private on the ground, blood is splattering out of his neck. The grenade cut through his head into the soil, a dud.

Some of the most vivid descriptions in the diary concern the retreat of the Austrian-Hungarian Forces after two botched invasion attempts of Serbia. In one instance, Kisch almost drowns trying to cross the Drina river during the panicky flight of the imperial army:

The drowning men are encircling me... Amidst the whistles of projectiles, the screams, screams, screams from the shore, new sounds are mixing in, the deep buzz of shrapnel. Their pellets are piercing the water and the blood... Next to me another pontoon is gliding, a projectile hits it directly, the pontoon capsizes, I look away... Of our division hardly a thousand men are left. Three thousand are missing--shot or drowned within a few hours on a
tiny area.

In November 1914, Kisch finds out that his brother Wolfgang was killed on the Eastern Front: "It was the most horrible letter that I ever received in my life: My brother Wolfgang is dead... Why did death have to strike Wolfgang and not one of us!"

From then on Kisch is possessed by a "manic hatred for the war" as he notes. He dismissively talks of his superiors after yet another retreat: "Now on the flight our rulers learn that one cannot win the war with summary executions, berserk pose and murder." He mocks the Central Powers: "I cannot help myself, I see black for Germany and I diffidently look at the future of Austria."

Yet, given his background as a reporter, he still retained his power of observation and noted, for example, the social upheavals of the war with prosaic frankness :

At night I slept in a Rakjatennen with two soldiers. To the left of me lay H., general manager of a big weaving mill in Vienna and schooled economist, to my right D. janitor at a brothel, and violent burglar... It was cold and we firmly pressed against each other.

As the military campaigns progresses Kisch questions his past profession and as a consequence turns down the offer to write for the Berlin Tagesblatt, a newspaper he had contributed to before the war:

What I am experiencing here continuously is called war... enough stories appear about it in the papers, yet all of it is wrong and distorted. I am concerned with the question: Would I have delivered similar stories as a war correspondent?... I wrote down things that I would not have been allowed to write about as a journalist, and which the newspapers would not have printed. My diary knows and is allowed to though. What a difference between newspaper and notebook, between a day, reflected in the newspapers, and a day, survived in the trenches.

This reflection cuts to the core of the often difficult distinction between war propaganda and factual reporting in a conflict.

In March 1915 Egon Erwin Kisch was severely wounded on the Eastern Front, and according to the diary, promoted to an officer while still lying on a stretcher. In 1916, after his convalescence and deemed unfit for the front lines, he first worked as a censor of letters in a small town in Hungary and is then posted to the kaiserlich und königliche Kriegspressequartier (the army press quarters) in Vienna, where he witnesses the breakup of the empire in November 1918. His attitude towards the war may be summed up an earlier diary entry: "Good Heavens! War and humanity are irreconcilable, and they will remain irreconcilable, despite The Hague, Bern and Geneva." The experience of the war turns him into a lifelong pacifist.

No recognized English translation of the diary as a whole is readily available. With the centennial of the First World War fast approaching, there appears to be renewed interest in the often neglected central role of Austria-Hungary leading up to and during the conflict, as exemplified by Christopher Clark's magnificent scholarly work, The Sleepwalkers , or Manfred Rauchensteiner's new volume The First World War and the End of the Habsburg Monarchy . Similar to the new translation of the graphic notebooks of French Corporal Louis Barthas , it would be valuable and timely for an American publisher to resurrect the gritty realism of Egon Erwin Kisch in order that the wider English-speaking public can observe the cataclysmic and grim slaughter which constituted the First World War and prevent a similar tragedy.