EgoPo Classic Theater tread in very dangerous territory with their production of the incendiary 18th century bestseller Uncle Tom Cabin, by Harriet Beecher Stowe. Adapted in its full original text and tagged An Unfortunate History, the production spurred controversy and much needed debate. 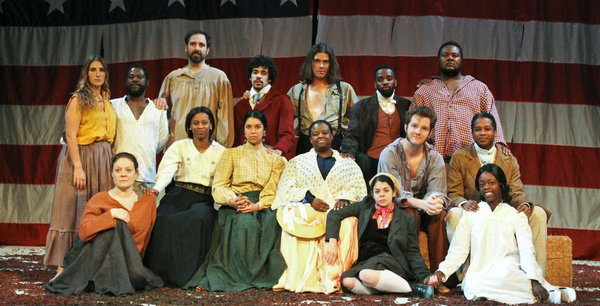 As tough as theater has gotten as a viable commercial art, in Philadelphia Lane Savadove's still believes that theater can be a catalyst for social change. His company EgoPo Classic Theater takes outrageous risks for all the right artistic reasons, often resulting in unexpectedly vital theater.

The company mounts season long themes that focus on stage literature from bygone genres, for instance. In the past EgoPo has produced maligned late career Tennessee Williams plays, staged pre-Weimar German rarities and so maybe it was inevitable that they would examine the best selling book of 19th century American literature, Harriet Beecher Stowe's Uncle Tom's Cabin. The show turned into a monumental project this month which capped off the company's American Vaudeville Festival which included shows about Harry Houdini and Jesse James, which boasted an all female cast slinging those firearms.

They were not just mounting a story freighted with negatives, he had to erase decades of versions of the play and its characters that devolved into white controlled Minstrel shows that stoked racial stereotypes.

Stowe based the story on real people and incidents of slaves escaping plantations, persecuted, tortured, separated from their families and sold as property. When Savadove read the book, he realized it wasn't anything like its reputation. He came to the conclusion that what causes the book now to be racially regressive is due not in small part had to do with the Vaudeville "permutation" that took pieces of plot and turns the characters into negative stereotypes.

But the director's POV with this concept was simply the idea of empathy for characters in ways that challenge one's subjective view. Savadove admitted that the before he opening, he was starting to sweat, thinking he was taking too big a chance, but he explained "we took on Uncle Tom's Cabin, particularly because was the most performed play in Vaudeville," he explained outside of Plays and Players on Delancey St. the beaux arts jewel box theater.

Doubts about the show disappeared after a successful run that brought together diverse audiences and critical praise The director knew this would be a different experience for black and white audience members. From a theatrical standpoint, the role reversal had a neutralizing effect after the prologue as the heavy plot and characters were defined by Stowe's dialogue and motives.

The character Uncle Tom close to a century has been viewed as a negative black stereotype. Uncle Tom became a racial slur alluding to a slave who willingly appeased whites and otherwise embraced his subjugated role.

It is starkly different character than the one Stowe wrote. Stowe's intent was to make him dimensional in that period in giving him a spiritual life, something that racist whites would never do. He does not stay on the plantation because he doesn't want to return to his family, but because he wants the opportunity to do so. That he befriends Eva, who reaches out to him and treats him humanly. Although Tom's attachment to the young daughter of the master can still be viewed as racist on several levels.

As it has been adapted by Savadove and Glenn Odom with a production that clocks in at 2:45, with just 12 words added to dialogue taken directly from the book, not the previous vaudevillian scripts, whose intentions were to caricature and double down the negative imaging on characters like Tom, Topsy and Mammy roles to delight racist white audiences.

Several cast members had to overcome personal resistance to hurl some of the racist language, for one. Paule Turner, aka The Duchess, was cast as the slaveowner Shelby and approached his character as just another role. "I've played white women, so I just get into the character." And that was uniform among the cast members. Although Ed Swidey as Uncle Tom admitted that the heaviness of the part and the physical aspects of depictions of abuse were emotionally hard.

Turner also choreographed the show's inspired opening tableau that goes on for 20 minutes as the audience files in. It is a country fair horse-shoe toss and the well -- healed gentry are the black actors and the servers and field hands, the white actors, moving in super-slow motion as they enjoy the holiday, fireworks go off and they cluster, cryptically in horrified reaction to the rockets red blaring. This entrée makes the audience contemplate the themes of racial divides that we all harbor in this country. This is confrontational theater, but it demands response.

The discussion of racial divides in Philadelphia continued with several audience and academic panels during the run of the play. In pre-production Savadove decided to go to South Africa to see what race relations were like since Apartheid was shut down and said he "was amazed to see how many strides they have made in so short a time," he told the audience. He still thinks there is a lot of work to do in the U.S., especially in urban areas like Philadelphia.

Lucky for us they are here sparking such discussion in theater. EgoPo was established in New Orleans and were on tour here with Genet's The Maids in 2005 Philly Fringe with Katrina hit the Gulf Coast demolished their theater. Through determination and a rallying theater community, Savadove, who grew up in the Philadelphia suburbs decided to keep his company here.