I received a text message and two envelopes containing election campaigning material today at my home in Cairo. One envelope was sent by mail, obviously part of a wide postal promotional campaign covering my district; the other envelope was dropped on my doorstep by what I imagine to be an idealistic and wide-eyes, probably young unpaid volunteer on his (it's probably a he) first assignment, climbing stairs three-by-three with his stack of envelopes.

Technology, in its basest meaning, refers to "how" we produce -- simply in what measure do production factors, labour and capital, contribute to the process of production.

So there you have it -- it's the old industrial technology dichotomy: capital-intensive advertising vs. labour-intensive.

The identities of the senders makes this somewhat nerdy realization far more interesting. 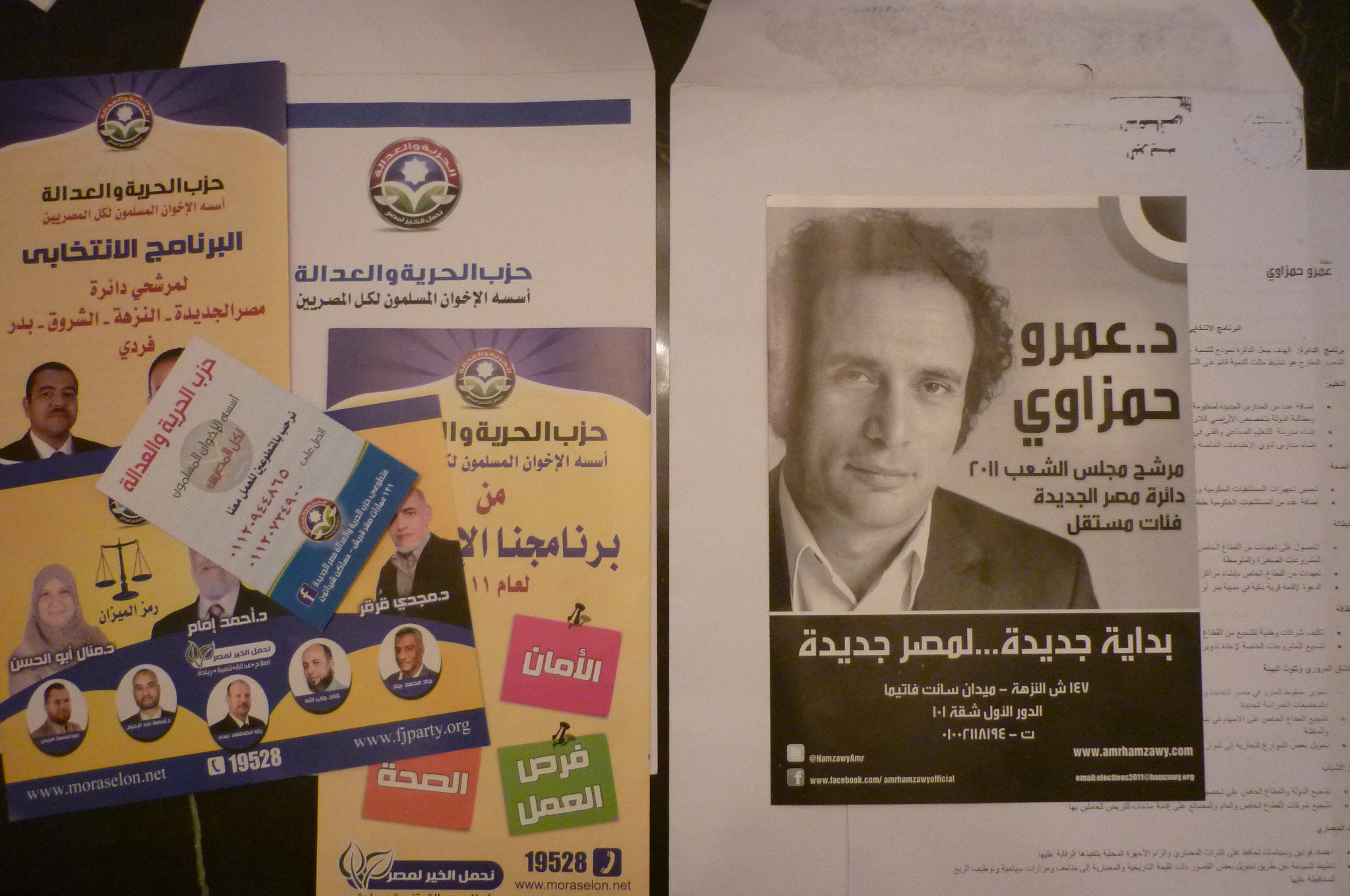 The text message came from Mahmoud Salem, a celebrity blogger and a leading liberal-secular candidate who works in advertisement. The first envelope came from also liberal candidate Amr Hamzawy, a political science professor. The second envelope (the "labour-intensive" one) advertised the entire lot of candidates for the Muslim Brotherhood's Freedom and Justice (F&J) in my district.

Mind you, the F&J's choice to send a volunteer with envelopes isn't one of necessity, far from it -- despite the opacity surrounding their funding, it is obvious the quantity and quality of printed documents is far superior to their aforementioned liberal competitor's, glossy colourful papers of various sizes (as opposed to one black-and-white flyer and a photocopied A4 paper for Hamzawy).

It is simply a reflection of core strengths -- and in many ways an elegant and simple explanation of the management of the various competing campaigns.

The Muslim Brotherhood's main strength is its capacity to organize and, consequently, to mobilize. Their omnipresence in universities ensures a constant arrival of fresh supporters and members, and their political party bases in its support on the huddled masses, and that many will be willing to listen to their message and then spread it -- the Brotherhood's ideology is extremely proselytising, and every recruit can rapidly evolve to be a recruiter and organizer of a number of members, and as an organization established in 1928, it has had plenty of time to organize (which is all to its credit).

On the other hand, Salem and Hamzawy -- and perhaps liberal candidates at large -- may have managed to fundraise from a limited number of more or less generous contributors, but will never have the same street-based support networks that the Brotherhood enjoy. The Egyptian liberal vote, a strange shapeless beast which, as one would expect in the first post-autocratic elections, is disorganized and incoherent and whose last-minute surge of support is insufficient to catch up. As such this support has been manifested in financial and moral (expressed by intentions of vote) means. Consequently, the liberal campaigning has utilised more expensive vehicles to pass on its message, simply to catch up. In any transitional elections this should be the case for most or all parties -- it isn't here.

Which is better then, asked me a student -- capital or labour-intensive technology? Neither, per se. Moving from labour to capital-intensive means of production is generally necessary for growth and scaling up in an industrialization process. But for the purpose of distributing leaflets either will do just fine, as long as it does not divert funds from other areas of the campaigning process, such as printing the leaflets. Arguably, spending money on pretty glossy leaflets and having them distributed by volunteers means more leaflets distributed than if you were to use some of that money to pay for the stamps or the SMSs.

Away from the "mailing dilemma", the bottom line is this -- days away from elections with a heavily-questionable process, a heavy imbalance of financial and mobilization means between parties and candidates means wider room for manipulation, that voters and observers alike must be aware of.