CAIRO, Egypt (RNS) A group of Christian youth activists that came together in the tumultuous aftermath of the Egyptian revolution is looking to the future and hoping to build on the gains wrought in Tahrir Square by mobilizing young people to better advocate for themselves.

“One of the main things is that people started to speak,” said Mina Elkess, a 28-year-old ophthalmologist and one of the group’s leaders.

Since the revolution, Christians have begun participating more directly in the political process, a primary goal of the Maspero Youth Union, which celebrated its third anniversary on Wednesday (March 5).

The group, formed to fight for civil rights, rejects the mostly passive role Christian Copts played before the revolution, when the church’s patriarch served as proxy for the Coptic community in all matters political. It targets younger people — a powerful force in a nation where more than half the population is under 25 — and teaches them to advocate for their rights.

The union was born in the aftermath of a torching of a church in a village on the southern outskirts of Cairo. That church burning prompted large demonstrations in Cairo outside the Maspero, the state television building. The union takes its name from the peaceful demonstrations held there.

Later demonstrations on Oct. 9, 2011 turned deadly, when armored personnel carriers moved in and soldiers opened fire on peaceful demonstrators. At least two dozen people were killed — including members of the youth union — and more than 300 were injured.

After that, Christians were understandably afraid of political engagement and largely withdrew from civic life. But that changed, Elkess said, when the Muslim Brotherhood’s candidate Mohammed Morsi was elected president.

“Since Morsi, many Copts wanted to be involved,” Elkess said. “A lot of Copts feared what the Muslim Brotherhood would do.”

The church has welcomed this renewed enthusiasm for political engagement. When representatives from the union came to talk to Bishop Moussa, the church’s bishop for youth, he gently pushed them away, like a mother bird nudging her offspring out of the nest.

“Why are you asking me?” Moussa asked. “You are mature enough. Take your stand.’

Moussa said it’s essential to the future of Copts in Egypt that Christians are an integral part of the fabric of society.

“We are trying to get them outside the church in that civil area to interact with their brothers the Muslims,” he said. “The church must not interfere in political affairs. We are a religious body.”

Elkess stressed that the group isn’t only concerned with Copts. “We speak generally for human rights, rather than for Copts,” he said. “We are a political movement pressing on authorities. We belong to the revolutionary way of thinking.”

Members of the Maspero Youth Union — a few hundred, according to leaders — are looking forward to taking part in that political process. Next up: presidential and parliamentary elections.

The group won’t support a particular party or candidate but wants a civilian, nonreligious government.

Egypt’s new patriarch, Pope Tawadros II, elected in November 2012, has encouraged his flock to quit looking to the church for political guidance; he wants church members to form their own decisions.

His position — drawing a line between church and state — is something the Maspero Youth Union has advocated since its inception.

Youssef Sidhom, editor of the Coptic newspaper Watani, said that reflects the current mood. The age when the Coptic Church was the primary representative of Coptic interests is over, Sidhom said. “The church wouldn’t dare do it, and the Christians wouldn’t accept it,” he said.

To that end, the union recently held what it hopes will be the first in a series of three-day retreats to teach young people how to effectively participate in the political process, both as Egyptians and as Copts, said Beshoy Tamry, 25, a member of the union’s political office and the event’s organizer.

It’s good to have Copts holding high positions in political parties and seats in Parliament, Tamry said, but it’s better if they use their positions to address the unique problems Christians and other religious minorities face.

There’s a lot of work to be done on that front, and that’s where the union plans to focus its energy going forward. The primary tasks are fighting discrimination and persecution and agitating for greater religious freedom. To do that, though, more Copts are needed in positions of authority.

“It’s not enough to be in the streets,” Elkess said. “You need to have people who can act.” 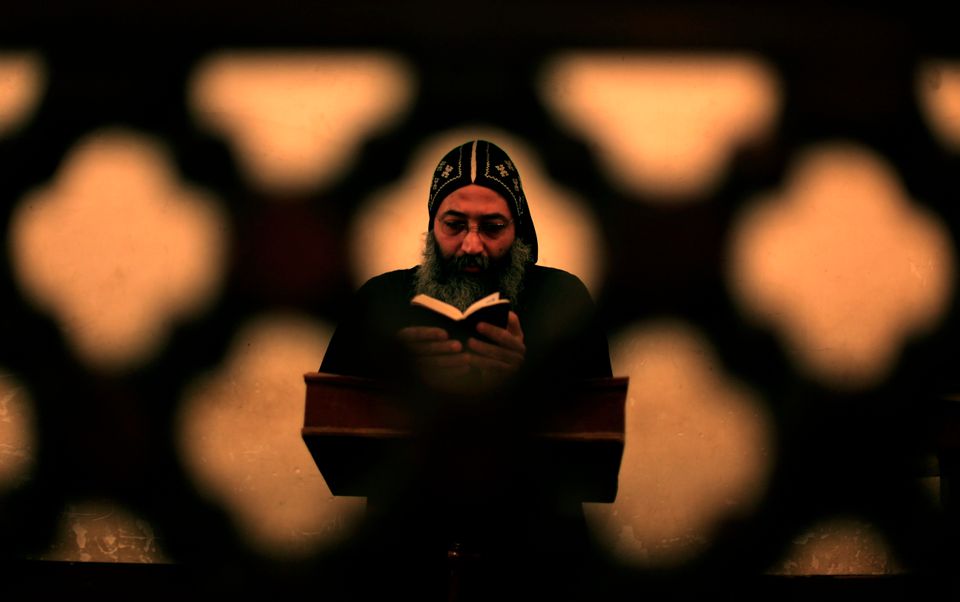 1 / 24
A clergyman prays during an early morning mass at the historic al-Muharraq Monastery, a centuries-old site some 180 miles (300 kilometers) south of Cairo in the province of Assiut, Egypt, Tuesday, Feb. 5, 2013. Egypt's Coptic Christian pope sharply criticized the country's Islamist leadership in an interview with The Associated Press on Tuesday, saying the new constitution is discriminatory and Christians should not be treated as a minority. (AP Photo/Khalil Hamra)
AP