CAIRO, May 23 (Reuters) - Egyptians queued patiently to vote on Wednesday, eager to pick their leader for the first time in a national history dating to the pharaohs, with Islamists and secular-minded rivals who served under deposed President Hosni Mubarak heading the field.

With no reliable opinion polls, no one knows who will win the presidency, but Egyptians revelled in the uncertainty after the routinely rigged votes of Mubarak's 30 years in power.

"We must prove that the times when we stayed at home and someone would choose for us are over," said Islam Mohamed, a 27-year-old swimming coach, waiting at a Cairo polling station.

There were no early reports of vote-related violence.

The election is a momentous sequel to the popular revolt that toppled Mubarak 15 months ago. The military council in charge of a messy political transition since then has overseen a constitutional referendum, parliamentary polls and now a vote for a president to whom it has promised to hand power by July 1.

The revolutionaries of Tahrir Square may be reluctant to trust Egypt's future to Islamists or Mubarak-era politicians, but those candidates may appeal to many of the 50 million eligible voters who yearn for Islamic-tinged reform or who want a firm and experienced hand to restore stability and security.

Whoever wins faces a huge task to relieve a dire economic outlook and will also have to deal with a military establishment keen to preserve its privileges and political influence.

The relative powers of the president, government, parliament, judiciary and military have yet to be defined as a tussle over who should write a new constitution rumbles on.

Many Egyptians were still undecided even as they went to the polls on the first of two days of voting.

"I will vote today, no matter what, it is a historic thing to do, although I don't really know who I will vote for," said Mahmoud Morsy, 23. He then said he would probably plump for Mohamed Mursi, candidate of the Muslim Brotherhood, whose voting machine has already ensured it the biggest bloc in parliament.

The nation of 82 million was in festive and relaxed mood, with many voters joking and chatting on a day to remember.

"Rise up Egypt," ran a giant headline in the popular daily Al Masry Al Youm, while state-run Al Gomhuria offered: "The president is in the ballot box, the key is with the people."

Voters shuffled slowly towards the ballot booths in bright sunshine. Some had brought chairs and newspapers, anticipating the long lines that often stretched around the block.

After the novelty of a three-week campaign blitz where candidates fervently wooed their support, Egyptians also enjoyed seeing presidential hopefuls queueing beside them to vote.

Those scenes were a world away from past elections when state TV would film a cosseted Mubarak casting his ballot among doting officials with no ordinary voter in sight.

In one Cairo district, 75-year-old Amr Moussa, a former foreign minister and Arab League secretary-general, stood in a queue with everyone else. "I hope they will elect a president who can really lead Egypt at this time of crisis," he said.

One Moussa supporter, who gave his name only as Ahmed, relished the sight. "Honestly, I like the idea of standing in line with the next president," he said.

Elsewhere in Cairo, some voters clapped independent Islamist candidate Abdel Moneim Abol Fotouh, 60, when he too lined up.

"For the first time the Egyptian people went out to choose their president after the end of an era of 'pharaohs'," Abol Fotouh said, alluding to Mubarak and his autocratic predecessors who, like him, were drawn from the top ranks of the military.

After the forged elections of the Mubarak era, voters were on alert for abuses. In one Cairo polling station, a judge intervened after voters complained that an election official was promoting an Islamist candidate. Most voting was going smoothly.

Unless one candidate gets more than half the votes needed to win outright, the top two will face a run-off on June 16 and 17. Official first-round results will be only be announced on Tuesday, but the outcome could be clear by Saturday.

Many Egyptians felt empowered and excited by the occasion.

"I've never voted for a president before in my life so the experience is quite new and makes me feel like a citizen of this country," said Ahmed Ali, a pharmacy student in Alexandria, Egypt's second city.

Although official campaigning ended on Sunday, candidates pushed to get out the vote. In Cairo, half a dozen mini-buses plastered with "Yes to Amr Moussa" offered free rides to voters.

One Alexandria mini-bus driver was not charging voters heading to the polls. "The rides today are on me," said Fathi Abdelaal. "Egyptians are finally in command of their destiny."

The nature of that destiny is far from clear.

The West, long wary of Islamists, and Israel, fearful about the fate of its 1979 peace treaty with Egypt and the boost the Muslim Brotherhood could give to its Palestian offshoot Hamas in the Gaza Strip, are watching the post-Mubarak era closely.

"Our vote will make Egypt's voice in the Arab world ring loud and clear," said Saad Abed Raboh, a civil servant voting in Alexandria. "For 30 years Egypt's vote was muted, but now it will be heard because Egyptians will choose their president."

Many Gulf states are concerned about who will lead the regional heavyweight after their long-time ally Mubarak was ousted. Their monarchies have so far emerged intact from the Arab uprisings and conflicts that erupted last year.

To allay such worries, the Brotherhood's Mursi pledged in a rally on Sunday: "We will not export our revolution to anyone."

Mursi joined the race at the last minute after the Brotherhood's first choice was ruled out. He may lack charisma, but he has the group's formidable organising skills behind him.

Abol Fotouh, who was kicked out of the Brotherhood when he said he would run against its wishes, has sought support across the spectrum from liberals to hardline Salafi Muslims.

Another prominent candidate is Ahmed Shafiq, Mubarak's last prime minister, who like his ex-boss, once led the air force.

Leftist Hamdeen Sabahy has become the choice of many voters unsatisfied both with Islamists and Mubarak's former ministers. He is inspired by Gamal Abdel Nasser, the pan-Arab nationalist whose "Free Officers" overthrew King Farouk in 1952.

Mubarak, under pressure from his U.S. ally, did stage one multi-candidate presidential race in 2005, but with rules that barred any realistic challenge. Last year's popular revolt overthrew him before another election that was due in 2011.

Even if the presidential vote and the military handover pass off calmly, Egypt faces a bumpy road ahead.

"It is not going to be smooth," said Steven Cook of the Council on Foreign Relations in Washington.

"Not only are there economic problems to resolve, but Egyptians are going through a wrenching period in which they are trying to define what kind of political system they want, what kind of society they want, what Egypt stands for, and its proper place in the region and the world. These are not easy matters." (Additional reporting by Yasmine Saleh, Tamim Elyan, Dina Zayed and Shaimaa Fayed in Cairo, Tom Perry in the Nile Delta and Marwa Awad in Alexandria; Editing by Alistair Lyon)

Egypt Elections: Egyptians Head To The Polls To Pick A President For The First Time (VIDEO)
Egypt&#039;s Presidential Elections 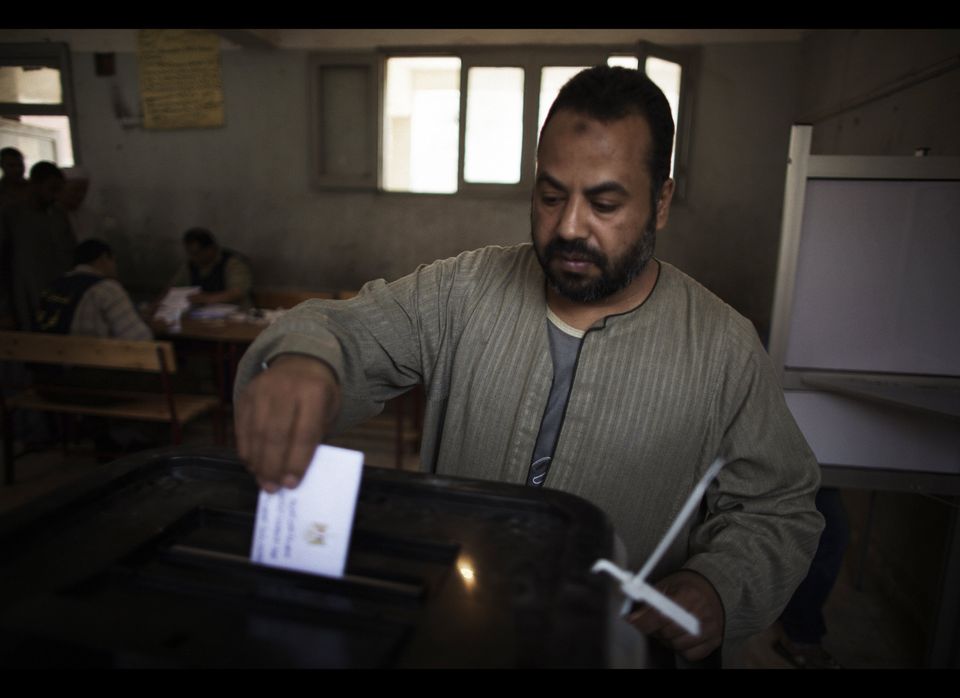 1 / 9
An Egyptian man casts his ballot at a polling station in the Manshiyet Nasser district in Cairo on May 23, 2012, during historic presidential elections, the first since a popular uprising toppled Hosni Mubarak.(MARCO LONGARI/AFP/GettyImages)
Getty