But as night fell, the tens of thousands of people who spent much of the day crammed in Tahrir Square -- chanting and dancing and, in some cases, engaging in brutal clashes with state security forces -- showed no signs of being placated by the military's offer.

After a long day of massive street protests, the Supreme Council of the Armed Forces (SCAF) indicated Tuesday evening that they would support the formation of a new civilian "rescue" cabinet. They also promised that elections for a civilian president, which had been pushed back until 2013, would take place in June 2012.

In a moment reminiscent of the bitter February night when former Egyptian president Hosni Mubarak attempted to quell protesters in Tahrir Square with a defensive speech, the current leader of the country's ruling military regime addressed the public Tuesday evening. In his first remarks on the renewed uprising in Cairo, Field Marshall Mohamed Hussein Tantawi ignored demands to resign and reiterated that he accepted the resignation of Prime Minister Essam Sharaf's government.

Denouncing "hidden powers trying to cause a rift between the people and the armed forces," Tantawi pledged to hold elections for a civilian president soon, but stopped short of conceding any of protesters' major demands, which include giving up military control of the state, and ending all military trials and Egypt's emergency laws.

The people in Tahrir Square immediately roared with disapproval, chanting "Irhal, irhal!", or "Go, go!", repeatedly -- the same mantra they yelled during the 18 days of protests in January and February that eventually forced Mubarak to step down.

A potentially crucial difference between this week's protests and events of February, however, is that Tantawi's audience is significantly angrier, more frustrated, and -- in some cases -- more violent than before. In buildings near Tahrir, people listened to the speech over the sound of gunfire and tear gas rounds.

At one point during the day, an Egyptian Army captain who gained notoriety for his defiance to the regime in February appeared before the crowd, where he was hailed and carried on protesters' shoulders.

Speaking later to reporters in the square, the officer, Ahmed Shoman, said the army "should never be above the people," and alleged that many members of the armed forces did not agree with the positions of the leading generals.

But as the regime made its concessions, many people in Tahrir could detect a distinct lack of satisfaction on the part of protesters, stemming in part from the disappointments and frustrations of the past nine months, but also from the ongoing abuses committed by the ruling military.

"This is definitely not a Mubarak-steps-down moment," Egyptian Twitter user Sarah Badr said after the SCAF's announcement began to trickle out, and protesters continued their defiant chants.

Egypt expert Michael Hanna noted in a tweet that SCAF hasn't discussed emergency law, military courts, or detainees, "some serious issues that must be part of any credible plan."

Up the street from central Tahrir, smoke and tear gas continued to rise above the intersections where anti-government youths have been battling security forces, and the sound of protesters' chants demanding the end of the military leadership were punctuated only by the blaring sirens of ambulances, as they ferried wounded protesters out of the combat zone.

Reports have put the death toll from the latest bout of fighting at around 35, although the figures vary, and authorities have been accused of banning reporters from visiting morgues.

A large fire broke out in the early hours of the night in the upper floors of a building by the square. The fire was said to have been started by one of the many volleys of tear gas fired by riot gear-clad police officers. Black smoke poured across the square and much of the surrounding areas.

Yesterday, a little before midnight, a trip to the front lines of the battle by The Huffington Post revealed a certain rhythm to the combat. Along Mohamed Mahmoud street thousands of young men faced off with the police guarding the Ministry of the Interior, while their comrades launched flanking assaults from various side streets and alleys.

Along one pitch black alleyway leading directly to the police frontline, HuffPost watched the young men creep down the street throwing rocks and yelling.

When it appeared their compatriots on the street had the upper hand -- throwing waves of Molotov cocktails and forcing the police into retreat -- they would surge forward.

Within minutes, however, the police, taking cover behind armored personnel carriers and other makeshift barricades, would recover and charge back, shooting rubber bullets directly into the crowds, and tear gas canisters both into the crowd and overhead.

As the youths raced backwards, others standing in the intersection -- with a clearer view of the action ahead -- yelled "Stay there! Stay there!" urging their friends not to give up too much ground.

The battles had continued this way, and along more or less the same ground, for over 60 hours.

One street to the north, organizers had set up an emergency field hospital at the base of the street, where it met Tahrir Square. Every few seconds, injured fighters were rushed from the battle zone onto waiting motorcycles, where they would be sandwiched between two rescuers and delivered to the clinics.

Many had rubber bullet wounds in the head and legs, while others were simply overcome by asphyxiation from the repeated rounds of tear gas fired into the confined space of the alleyways. The more seriously injured found their way directly onto a waiting ambulance, to be taken to a makeshift hospital that protesters had set up in a church nearby.

Every few feet, protesters offered bottles of milk or vinegar or other concoctions, which when sprayed in the eyes offered effective protection from the thick tear gas that constantly lingered in the air, although was little use to direct hits from the gas.

Groups of young Egyptian women were known to show up at the front to cheer on the fighters.

"We're here to support you," one fighter said he was told by a gang of girls who surprised him close to police lines earlier in the day.

The fighter explained that many of his compatriots had come to fight because they were poor, and detested the way state police forces had treated them for all their lives.

"These are the people who have nothing in Egypt," he said. "They were the ones who were the most abused by Mubarak. They hate the state."

Protesters back in Tahrir Square, where the scene was calm but tense, have called for the military regime now running the country to fully remove themselves from power, but they have not united behind any candidates for replacement.

Even after midnight, Tahrir was as full as it had been in days, with tens of thousands of people -- mainly male -- watching the fighting develop, or milling around chanting anti-military rhetoric.

Religious figures and politicians who have tried to enter Tahrir, whether to rally the protesters around or attempt to moderate their behaviors, have generally been chased from the square, as the protesters insist they are defending the revolution from corruption from religious ideology or personality politics.

One top figure from the Muslim Brotherhood, the conservative religious group that has one of the largest followings in Egypt, has been chased from the square by angry crowds twice in the past two days.

Late on Monday, the group, which is expected to fare well in next week's parliamentary elections, formally announced that they would not be joining the Tahrir protests.

This is a developing story. Follow below for the latest updates: 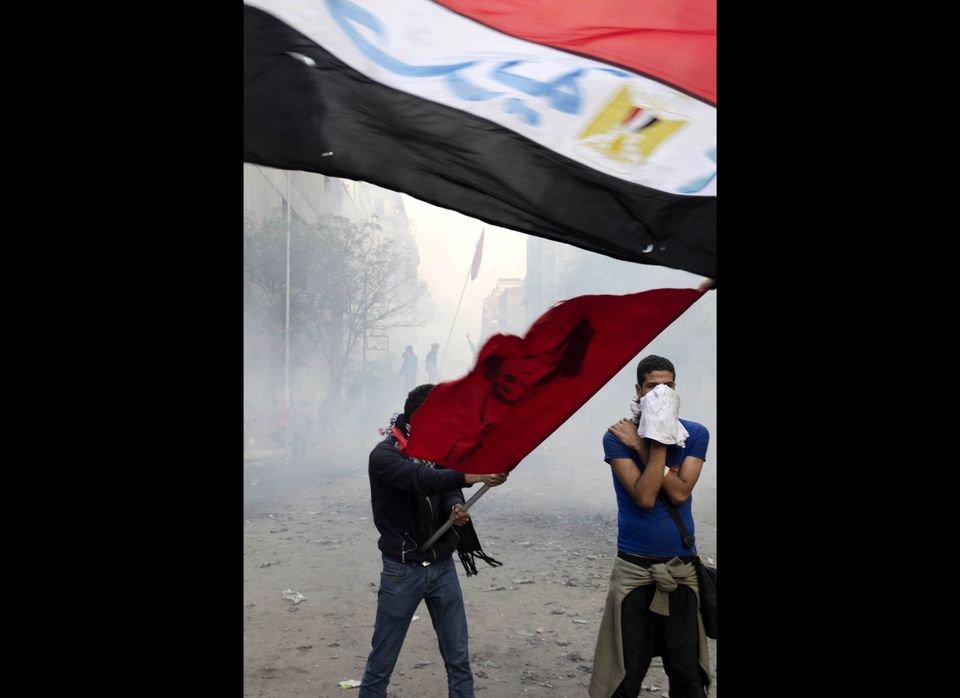 1 / 14
Egyptian protesters wave the national flag during clashes with security forces on the third day at Tahrir Square in Cairo on November 21, 2011. Fresh clashes erupted in Cairo's Tahrir Square between police and protesters demanding the end of army rule, as the ruling military council faced its worst crisis since Hosni Mubarak was toppled. (Getty)
Getty