CAIRO -- With Egypt's first democratic elections since the fall of Hosni Mubarak now less than a day away, voter confusion and the complexity of the process threaten to undermine the balloting -- assuming, that is, that renewed unrest doesn't sideline voting altogether.

For much of the past week, campaigning and party politics were largely set aside, as anti-regime protests and violent clashes with Egyptian security forces commanded most of the country's attention.

Now, several revolutionary activists insist that unless the ruling military regime that has governed Egypt since February promises to turn over power to a civilian president, the vote for a parliament shouldn't go forward at all. Many of them have once again taken to Tahrir Square, the site of the original revolution earlier this year, and pledged to stay there until the military yields.

But with a voting process that was invented entirely by the military regime this spring, and which at times seems designed to confound, many observers say there could be trouble ahead even without a spike in violence on election day or a dedicated boycott movement.

"Even without Tahrir, there are a million ways this could be a disaster," one Western election observer said this weekend, after being briefed on the intricacies of the process.

International election observers, who arrived in Cairo in droves over the weekend, say the system for electing a parliament from nearly 7,000 candidates is needlessly complex and time-consuming. The vote will take place over two days, plus a third run-off period, a process that will be repeated twice more in different regions of the country over the course of a month and a half.

Once in the booth, voters will have to select a party list, as well as two independent candidates. If they do not choose two independents, their entire vote will be invalidated, a technicality that few voters seem to be aware of.

Many essential decisions about the process have not yet been announced by the state. Details such as how the votes will be counted, how ballots will be stored overnight, and what portion of the results will be made publicly available before the entire process is complete remain unclear.

Other decisions, observers note, appear to have been made on the fly without much consideration. Until very recently, it wasn't clear how votes that were filed from abroad would be collected and tallied, and what districts they would be apportioned to. Observers say the government has suggested that they would let voters abroad self-indicate which district their votes would go to, and trust them to be honest.

Even the decision to expand voting in each locality to two days only was announced, with little explanation, on the election commission's Facebook page this Friday. Between the first and second day of voting, ballot boxes will be stored overnight in polling stations. They will be secured with locks and wax seals, but not security tape or numbered plastic ties, which are far preferred.

"It's not good," another Western election observer said. "What little 'system' there is is complicated, contradictory and non-transparent. The larger problem is that many procedures for the actual conduct of the voting remain undefined and could be interpreted and implemented differently in every polling center."

Meanwhile, political parties have been largely kept in the dark. In one particularly inept move, the government distributed CDs with information on registered voters to the campaigns, but ended up only including their names, and not any specific data about their locations or voting districts. "It was useless," a third observer said.

International election experts, from groups like the National Democratic Institute (NDI), the International Republican Institute and the Carter Center, have expressed concern, shared by many in Egypt, that their participation might offer false legitimacy to an inherently flawed process.

"Believe me, I've thought about it a lot; it's something that's on our minds," said Les Campbell, the Middle East and North Africa director for the NDI, who is in Cairo as an election witness. "But the way I see it is, I'll let the Egyptians define what is legitimate or not. What we can do is amplify whatever that decision is. If the politicians are willing to compete, we should be willing to observe. But we will not pull punches on what we see."

"If we had to do it over again, I think it would be better if the rules weren't changing every day -- even up to today," Campbell said.

Among the voters themselves, confusion and lack of information about the process run rampant.

During a canvassing session last week, before violence erupted in Tahrir Square, a candidate repeatedly found himself being forced to explain the voting mechanisms and locations to the potential voters he encountered, rather than talk about his policy positions.

CNN's Ben Wedeman, who spent much of Sunday tweeting pictures of campaign flyers strewn across Cairo and the simplified hieroglyphs associated with the candidates -- bananas, blenders, carrots, missiles -- also sent out a diagram printed in a local newspaper of the convoluted party and bloc alignments (for a clearer map, see here).

Meanwhile, international observers' input seems to have been largely disregarded by the military regime. None of the observers interviewed by The Huffington Post in recent days seemed able to explain how the regime had settled on its formulas for the vote.

Late on Sunday, as a soft drizzle fell on Cairo, most of the city -- even the hundred or so revolutionary diehards left in Tahrir Square -- seemed resigned to the reality that the vote was one just one night away. Egypt's first democratic election was coming, ready or not.

Below, see a list of some of the main parties in this year's election. For more information on Egypt's election process, visit the Carnegie Endowment For International Peace's elections guide, Al Ahram's guide, or the analysis by the International Foundation For Electoral Systems. 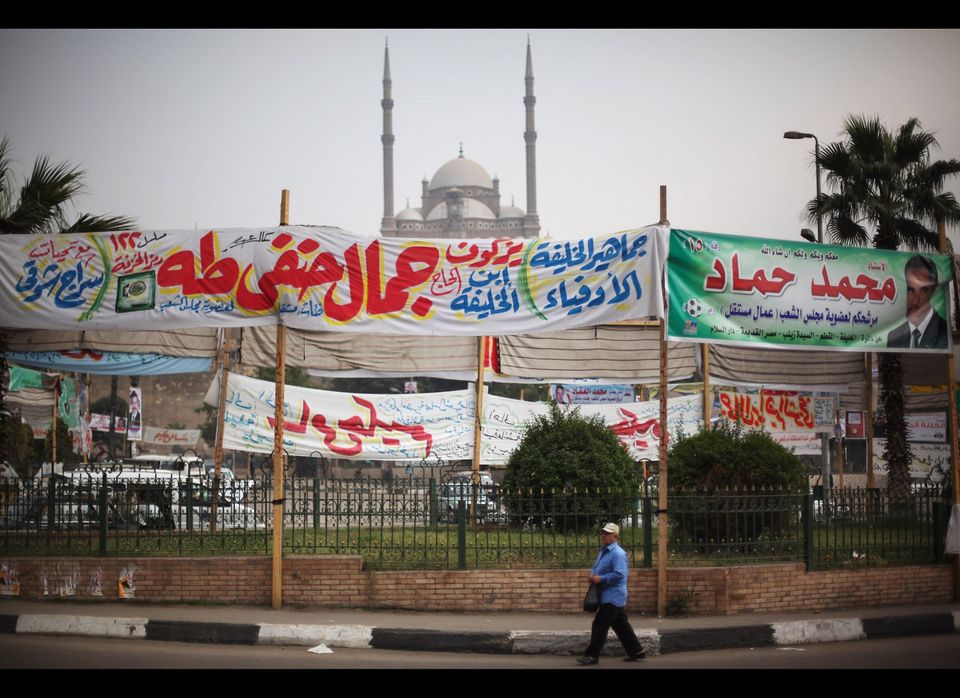