CAIRO -- As tens of thousands of people packed into downtown's Tahrir Square for the eighth straight day of massive street protests against Egypt's military regime, the regime itself seems to have hardened its stance against any significant concessions, raising questions about the intentions of a major American ally.

For more than a week, protesters here have directed their fury at the Supreme Council of the Armed Forces (SCAF), a shadowy council of 24 generals which demonstrators say has only propagated the policies and tactics of the regime of former president Hosni Mubarak.

On Tuesday, Field Marshal Mohammed Hussein Tantawi, the leader of SCAF, offered a slight concession to protesters, assuring them that elections for a civilian president would take place no later than June 2012.

But the ruling generals have disappointed protesters over the past several days. Many fault them for permitting the violence, and the violent assaults by security forces, to continue unabated. After Tantawi finished delivering his speech on Tuesday, security forces around Tahrir fired volleys of tear gas into the area, forcing many demonstrators to flee from the square.

After days of standing on the sidelines while clashes raged between protesters and tear-gas-armed riot police, the Army finally moved in early on Thursday morning to impose peace, setting up concrete barriers along Mohamed Mahmoud Street, where the worst fighting has taken place.

In a wild press conference on Thursday that partly devolved into a yelling match with reporters, two top generals stated that parliamentary elections, which many liberals and revolutionaries hope to postpone, would continue on time. They also flatly denied widespread evidence that security forces had abused defenseless protesters during the street clashes of the past week.

The general went on, "Trust in the SCAF is absolute from the majority of the Egyptian people because they have no one to support them but the army. There’s no power that will protect Egypt now from the threats Egypt faces and the conspiracies but the military."

Lauren Bohn, a freelance journalist who attended the press conference, described encountering an Egyptian journalist weeping in the bathroom during the event.

"This is a nightmare," the woman said.

"The really scary thing is, those were not lies," another Egyptian journalist said afterward. "It's what they truly believe."

It has been a steep decline for an institution that has long been one of the most popular in Egypt, and which was heralded as the nation's savior back in February, when street protests ended the 30-year regime of president Hosni Mubarak.

At the time, protesters hoisted Army officers on their shoulders, parading them around Tahrir Square and chanting, "The people, the Army, one hand!"

Now in Tahrir Square, the chant is, "The Army, the police, one hand" -- a reference to the hated and brutal Interior Ministry security forces, who have faced off with protesters all week.

In a report released last week, Amnesty International slammed the "brutal and heavy-handed" behavior of the military since taking over power, and said that tactics used over the past several months bear "all the hallmarks of the Mubarak era."

"When people left Tahrir on February 11th, they wanted to believe in the army because they didn't want to get into a confrontation," said Amal Bakri, an activist who has been involved in a new organization, No to Military Trials for Civilians, aimed at fighting SCAF.

"Little by little they found out, and it started just two weeks after Mubarak stepped down," Bakri said. She ran off a list of the military council's sins, including abuses of protesters, the unlawful detention and military trial of thousands people since the revolution, and the horrifying murder of several Coptic Christians during protests in October.

"The people started to realize, but they still didn't want to face it," Bakri said.

Indeed, it appears to have taken the tumultuous events of the past week to make many established Egyptians recognize the true nature of the SCAF.

Earlier this week, Mohamed Aboul Ghar, a 71-year-old medical doctor who helped found the liberal Social Democratic party after the fall of Mubarak, publicly apologized for having agreed to participate in a meeting with SCAF officials during the height of the recent Tahrir crisis.

When he arrived at the meeting, Aboul Ghar told The Huffington Post this week, he found that he was the only person in the meeting to raise the matter of the protests in Tahrir. He delivered to the generals a list of five demands -- including that the violence stop immediately, and that the army issue a clear apology to the nation -- and was assured that the SCAF would comply.

Instead, that night, he watched Tantawi deliver his defiant address. It would take two more days before the SCAF followed through on most of the demands.

"If they had said this in the microphones or on the televisions, probably people would have been quieted," Abou Ghar said. "Maybe. At least it wouldn't have led to a tragedy, because people wouldn't have died afterwards."

He added, "We do not accept anymore that the army is the sole guardian of the revolution."

The sting is bound to be particularly strong in Washington, where top SCAF generals are a persistent and familiar presence, and many in the American administration had privately hoped the army might stand as a bulwark against whatever forces of Islamism may emerge from Egypt's parliamentary elections. The Muslim Brotherhood in particular is expected to fare well in next week's vote.

Egyptian Army officers regularly train alongside their American counterparts, part of a tradition that dates back several decades, and SCAF officials are familiar faces around the halls of Congress.

But since its initial, cautious remarks on the violence that broke out last week between protesters and state security forces, the U.S. State Department has slowly ramped up its rhetoric.

In a background briefing before the recent uprising, a senior State Department official told HuffPost that the Obama Administration does not believe that SCAF generals have any intention of continuing to openly lead the nation, something that most Egyptian analysts agree is probably the case. But whether SCAF would be willing to give up the trappings of behind-the-scenes power they retained under Mubarak -- including, by some counts, control of one third of the Egyptian economy -- is yet to be seen.

"I think it doesn't matter whether they are in the forefront or if they merely have all the power to make decisions and to topple regimes and to make their own constitution," said Bakri. "The fact is they should not be allowed to be anything but to protect the country."

On Tuesday, the State Department, which has been wary of direct confrontation with SCAF's management of Egypt, for the first time explicitly condemned "the excessive force used by the police."

"We believe that the Egyptian Government has a particular responsibility to restrain security forces and to allow the Egyptian people to peacefully express themselves," spokeswoman Victoria Nuland said, following an earlier statement that had called for restraint from "all involved."

The big question, analysts say, is whether the military can be trusted to actually turn over power to a civilian government, and if parliamentary elections held under these murky circumstances would be a step in that direction.

"Frankly I never believed the elections should happen, because if SCAF was there, what kind of elections are we getting?" said Bakri. "People have died for clean elections and if SCAF is involved it will not be a clean election."

Aboul Ghar, whose party suspended campaigning this week and who would like to see the vote delayed two weeks to allow the parties to regroup, said that SCAF's failure has brought great disappointment to Egypt's revolutionaries.

"People expected the army to do better, and they did not. And they did not because of their incapability. They don't have the experience; they don’t have the political vision. You saw the press conference -- to give answers like that in an interview, any politician, he would vanish! It would be a scandal for any politician to behave like this." 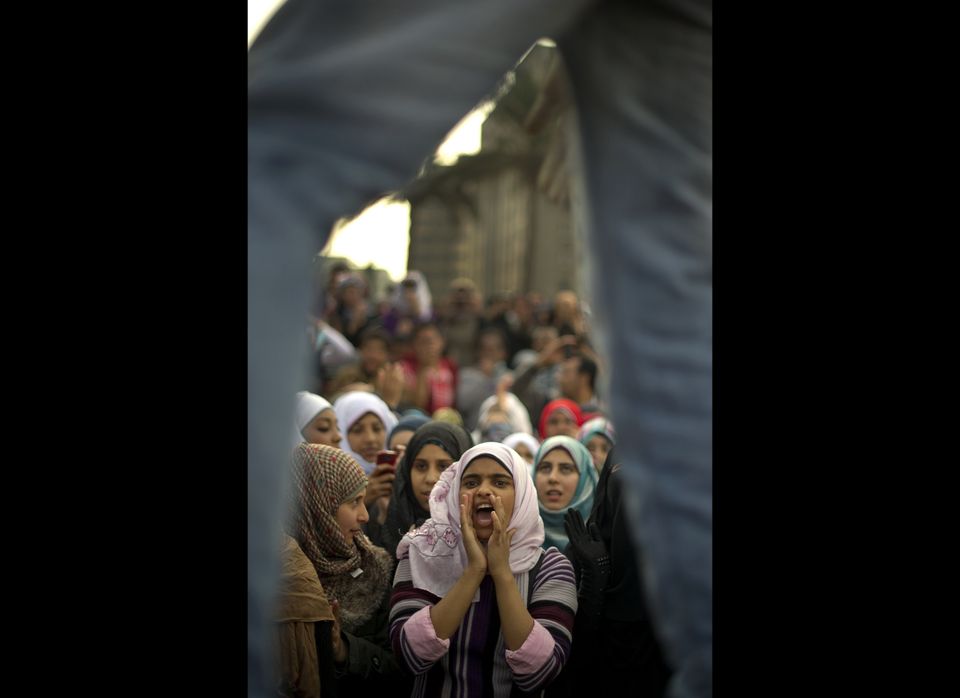 1 / 19
An Egyptian woman shouts slogans during a demonstration in Cairo's Tahrir Square on November 24, 2011 as Egypt's military rulers apologized for the deaths of demonstrators at the hands of police and a truce brought calm back to the outskirts of the square. (Getty)
Getty