CAIRO -- In a sandy lot in Manshiet Nasser, one of Cairo’s largest slums, barefoot children play amid crumbling 15th-century tombs and mausoleums blackened by burning trash. What was once a graveyard with intricate historic monuments is now in ruins, a testament to the crushing poverty that surrounds it.

Omneya Abdel Barr, an Egyptian conservation architect and activist, shades her eyes from the sun and assesses the dire state of the centuries-old tombs, shaking her head.

“Of course, the government is doing nothing whatsoever to repair them,” she said, pulling out her camera to document the damage. “It’s a disaster.”

Abdel Barr, who runs a campaign called “Save Cairo,” is on a mission to save the monuments and a slew of other historical sites in Old Cairo that face looting and destruction. On Sunday, she and around 10 other activists will ask Egypt’s public prosecutor to take on their case against the heads of Cairo's historic districts and the Cairo Governorate, a municipality of more than 8 million people that includes the area surrounding Cairo. They are failing to protect history, she says, and in some cases, advocating for its destruction.

“Now that we see the neglect of our historic buildings, the infringements on them, even the destruction of parts of them, now that we see the utter disregard for the law of some officials and of the land and real estate mafia, we have decided to act,” the petition reads. “We will use all legal and judicial means - and if we have to use our bodies to shield Egypt's material heritage and to protect its history we will use them.” 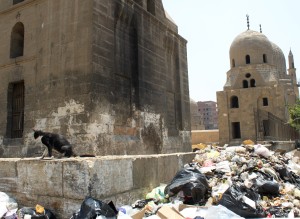 Old Cairo, which has more than 600 historical sites ranging from the seventh to the 20th century, has been on UNESCO's World Heritage List since 1979. Many of the sites are located in sprawling slums and face destruction from an ever-growing population, while others are missing priceless artifacts after heavy looting during the 2011 revolution. Activists say the government, like past regimes, is suffering from a gross lack of management to adequately protect them.

“We have conservation laws and we have protection laws,” Omneya said. “But nothing is being respected.”

Activist Sally Soliman, another member of Save Cairo, recently told Egyptian news outlet Ahram Online that she is particularly concerned about the rise in construction of illegal buildings around historic sites. In Manshiet Nasser, the mausoleums are surrounded by towering half-built buildings that will be used as apartments.

“Antiquities Minister Mohamed Ibrahim himself told CBC TV channel earlier this month that there are 192 demolition orders issued to remove unauthorised and illegal buildings,” she said. “But nothing happens on the ground.

Omneya and her fellow activists have advocated for one site in particular in recent weeks -- the ruins of Al-Fustat, Egypt’s first capital under Muslim rule. They say the Cairo Governorate may soon destroy the archaeological site by converting it into a park or some other public space without excavating it first, a move they argue is illegal under Egypt’s antiquities laws. 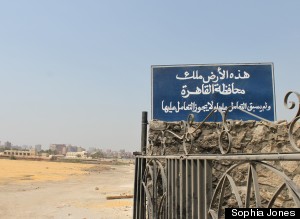 A sign in front of the Al-Fustat archaeological site now says it belongs to the Cairo Governorate instead of the Ministry of Antiquities.

While the area now mostly looks like a sandy patch surrounded by a highway and sprawling urban development, experts say it is likely rich in artifacts and ruins buried underground. Irrigation and water needed to sustain a garden, like the one the Cairo Governorate reportedly wants to build, could destroy what is left of Al-Fustat, according to Omneya.

"Our history is being destroyed over and over!! I feel that we are leaving nothing to future generations except failure," the prominent Egyptian blogger known as Zeinobia recently wrote in response to the debate surrounding Al-Fustat.

In a statement earlier this month, the Ministry of Antiquities said it talked about turning the site into a "cultural garden."

"The site was full of garbage, which was affecting negatively El-Fustat monuments. It is being cleaned now by order of Prime Minister Ibrahim Mahleb after his visit to the area," said Samarat Hafez, head of the Islamic Antiquities Sector at the Ministry of Antiquities, according to Ahram Online.

In addition to Omneya's group, other local groups have also begun campaigning to save at-risk historical sites. The “Save Alexandria” campaign is working to restore the coastal city’s rich history, and “Save Mansoura” is doing the same in the Nile Delta. Omneya said that she also hopes to reinvigorate the conservation movement through the Egyptian people themselves. She plans to launch a campaign to rally private Egyptian donors to buy and renovate old buildings and sites before they're destroyed forever.

Omneya says conserving history is essential to Egypt’s future, particularly since the country has long relied on tourism, which has reportedly declined 43 percent due to unrest.

“I hope to encourage Egyptians to invest in their own heritage,” Omneya said. “We have to make heritage sell.”