* More than 50 killed in protest after president toppled

CAIRO, April 16 (Reuters) - An Egyptian court sentenced 119 supporters of the Muslim Brotherhood of former president Mohamed Mursi to three years each in prison on Wednesday in connection with protests last October against his overthrow, judicial sources said.

More than 50 people were killed in the Oct. 6 protests called by Mursi's supporters, one of the bloodiest days since his overthrow by the military on July 3. Judge Hazem Hashad acquitted six people in the case. They faced charges including unlawful assembly and thuggery.

The army-backed authorities have banned the Muslim Brotherhood and driven it underground, killing hundreds of its supporters and arresting thousands in the weeks after Mursi, Egypt's first freely elected president, was toppled by the military following mass protests against his rule.

Abdel Fattah al-Sisi, the general who ousted Mursi, declared last month that he would run in a presidential election that he is expected to win easily.

In another case last month, a court in southern Egypt sentenced 529 Mursi supporters to death in a ruling that drew criticism from rights groups and Western governments.

The Muslim Brotherhood was Egypt's best organised political party until last year but the government has accused it of turning to violence since Mursi was overthrown. The Brotherhood says the group remains committed to peacefully resisting what it views as a military coup.

Many of the Brotherhood's leaders, including Mursi, are on trial. Mursi is charged with crimes including conspiring with foreign militant groups against Egypt, which carries the death penalty.

In a separate case, a judge sentenced a prominent Islamist preacher and politician to seven years in jail on charges of forging his mother's citizenship documents so he could contest the 2012 presidential election won by Mursi.

Hazem Salah Abu Ismail, a hardline Salafist Islamist, was arrested after Mursi's downfall. He was disqualified from the election when it emerged his mother held U.S. citizenship - dual nationality that meant he could not run.

Abu Ismail was sentenced to an additional one year in prison on Saturday for insulting the court. (Writing by Tom Perry; Editing by Michael Georgy and Janet Lawrence) 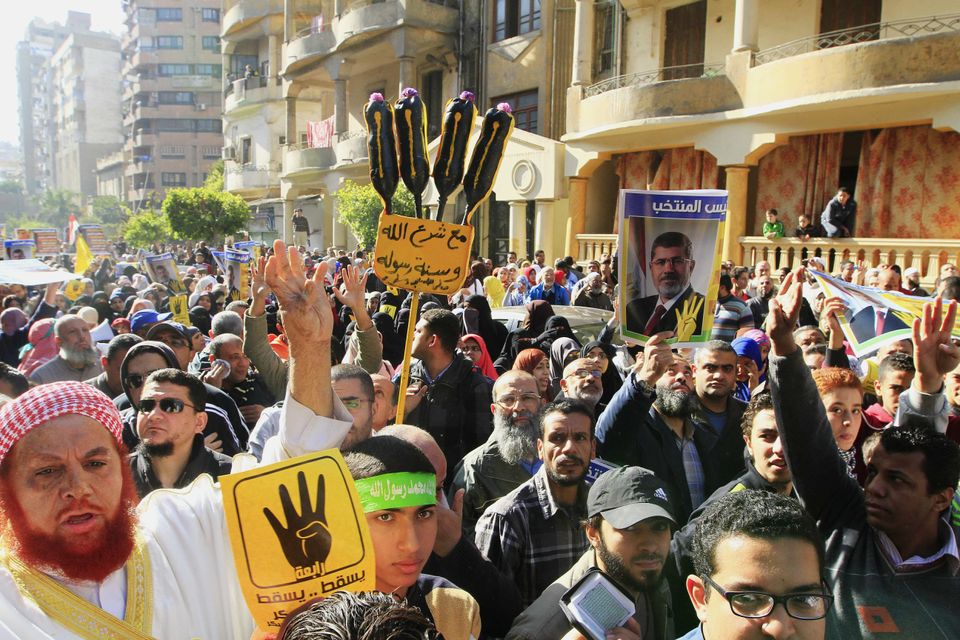