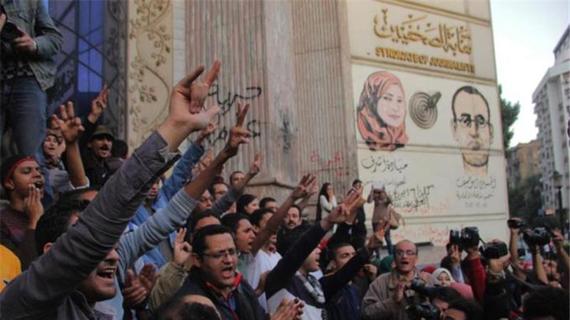 A frenzy of arrests possessed the Egyptian authority those last few weeks; capturing youth from homes, from cafeterias, from streets, and there's even a case of arrest from the Cairo airport.

Malek Adly, a human rights lawyer, known for his constant chase after the freedom of those unjustly in prison. Malek, the brave and persistent and righteous person, the one that risks his and his little family's life for the sake of his beliefs, was arrested because of his views and because he looked into papers that proved that Tiran and Sanafir, (the two Red Sea islands that were given earlier in April to Saudi Arabia) belonged to Egypt. What kind of a conviction involves "planning to overthrow the state" because of an attempt to prove something?

Sanaa Seif was recently freed from prison by a presidential pardon. She was arrested the first time for planning a protest calling for the freedom of her unjustly prisoned brother, Alaa Abdelfattah. Her brother is sentenced to life. With the paranoia taking over the regime's mind, Sanaa found out she was sentenced to sixth months in prison for insulting a member of the presecution. Yes, just like that, a sentence out of nowhere.

Ibrahim Tamer Ibrahim, or "Bebo" as his friends call him, an Engineering student at the American University in Cairo, was arrested in the Cairo airport while departing to Athens. The airport... According to Daily News Egypt, Ibrahim was arrested on April 15 while walking near the Press Syndicate and was released shortly afterwards. There was another attempt of arrest on April 23 from his house, but since he was at the airport then, the police arrested him from there. I mean, how desperate does that make of the regime? What's the worst thing that Bebo could have possibly done to be arrested right before the 25th of April protests?

Ezz Eddin Khaled, a 19-year old actor, Arts student, and a member of the Atfal al-Shawarea (Street Children) troupe, was arrested from his house, accused of publishing videos on the internet that insulted the oh-so-holy-state institutions. His troupe's videos are always on the streets in a selfie-format, where they make satirical videos with social, culture, and political commentary. As of now, Ezz will stay held up for four days until further investigation. But with Egypt's court system, you never know.

If your attempt is to break us, then good for you, it worked. Prison does break us. But it doesn't stop us. It never will. 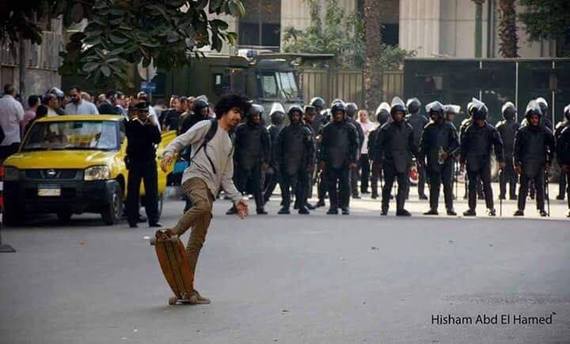 What's next Egypt? Abolish all your youth? Is that how you see the future? A future reliant on people who probably can't even walk without a stick to hold their balance up? A future with no opposition, with no youth, with no hope?

What's your -- as probably the worst regime that Egypt has ever experienced -- attempt? Because if your attempt is to break us, then good for you, it worked. Prison does break us. Losing our friends or brothers or sisters to the regime's unjust prison breaks us. Being in a state of worrisome that we're next breaks us. But, if your attempt is to stop us, then you've failed. You've failed big time. Prison can do everything terrible. Except fulfill what the regime thinks is the prison's primacy: Stopping us. Prison does not stop us. It never will. It burns us with a load of anger and rage and fury, all mixed together, against the regime. It creates more supporters. More supporters for us. It serves more proponents to the ideas. To our ideas. It shows the world who's scared, weak and fragile. Us? Or Sisi and his regime? Because yes the regime might have the power to handcuff us. But they don't and won't ever have the power of voice and persistence and rebellion that we're gifted with.