While many American leaders see a "moment of promise" in the popular uprising in Egypt, one concern is the potential rise of a regime that is more hostile to the United States. While no one can predict where the Egyptian crisis will lead, public-opinion surveys are a logical place to turn for a sense of how Egyptians view the United States. But mind the methodology: While two widely-reported surveys yield very different results, the one that covers virtually all of the population shows that Egyptians hold distinctly negative views of the United States and its president.

To get a handle on this issue, for example, Nate Silver checked the annual survey of 28 countries conducted by the BBC World Service and found a "dramatic" improvement among Egyptians in positive views of the United States, from 11 percent in 2007 to 45 percent in 2010. Barring some undisclosed change in their methodology, Silver concludes, "there is no particular reason to doubt that there has been a significant shift in opinion" in Egyptian views of the United States.

But Silver may have overlooked a footnote in the report he linked to explaining that the BBC sampled only urban areas of Egypt -- specifically Alexandria, Cairo, Giza and Shoubra al-Khaima -- that represent only 22 percent of the total national adult population.

More importantly, a more comprehensive survey of Egypt last year produced a very different result. The Global Attitudes Project conducted by the Pew Research Center conducts an annual, in-person survey that samples all but 2 percent of the population (it excluded smaller "Frontier governorates for security reasons"). That survey finds a very different pattern: The favorability rating of the United States among Egyptians has fallen sharply, from 30 percent in 2006 to 17 percent last last year. More than four out of five Egyptians (82 percent) now rate the U.S. negatively, including nearly half (48 percent) who give the United States a "very unfavorable" rating. 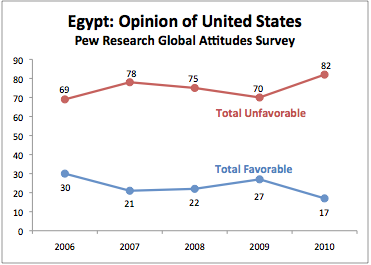 Curiously, the urban skew of the BBC survey does not explain the discrepant results. According to data provided to The Huffington Post by the Pew Global Attitudes Project, the favorable rating of the United States was actually slightly lower among urban Egyptians in 2010 (16 percent) than among those in rural areas (19 percent). Moreover, the decline was greater in urban areas (from 29 percent to 16 percent) than rural areas (from 25 percent to 19 percent). Another caution -- which may explain the conflict -- is that the Pew survey classified roughly 44 percent of its respondents as urban, which amounts to double the size of the urban population surveyed by the BBC.

The Pew surveys do confirm the BBC results in one sense: They show that Egyptians express somewhat more confidence in President Obama than they did President Bush to "to do the right thing regarding world affairs," although Obama's numbers fell dramatically over the last year. In 2008, just 11 percent of Egyptians expressed confidence in then-President George W. Bush, a number that jumped to 42 percent for President Obama during his first year in office but fell to 33 percent last year. Meanwhile, the percentage of Egyptians expressing little or no confidence in Obama grew from 47 percent to 59 percent during his first year in office. The same Pew Research survey also finds approval of "the international policies of President Barack Obama" falling from 38 percent in 2009 to 17 percent last year, while disapproval shot up from 50 percent to 72 percent.

The results from Egypt reflect a similar trend measured by the Pew Research surveys across the Muslim world. "Except in Indonesia where Obama lived for several years as a child," their 2010 report explains, "the modest levels of confidence and approval observed in 2009 have slipped markedly."

Richard Wike, the Associate Director of the Pew Global Attitudes Project, explains that despite Obama's marginally greater popularity, "many of the concerns that people had about American foreign policy and American power in the Bush years are still around." The 2010 survey finds, for example, perceptions that the U.S. acts unilaterally in world affairs -- 85 percent of Egyptians say the United States fails to take the interests of Egypt into account -- and nearly three out of four Egyptians (73 percent) oppose the "U.S.-led efforts to fight terrorism." Meanwhile, even more disapprove of Obama's handling of the situations in Afghanistan (81 percent), Iran (76 percent) and the Israeli-Palestinian conflict (88 percent).

At the same time, the majority of Egyptians say they are very or somewhat concerned about "the rise of Islamic extremism" in their country (61 percent), express an unfavorable view of Al Qaeda (72 percent), have little or no confidence in Osama bin Laden (73 percent) and say suicide bombing is rarely or never justified to defend Islam (80 percent). "On these questions," Wilkes explains, "Egypt is pretty consistent with what we have seen in most of the other predominantly Muslim countries that we've surveyed."