CAIRO/ALEXANDRIA, Egypt, Jan 25 (Reuters) - Protesters clashed with police across Egypt on Friday on the second anniversary of the revolt that toppled Hosni Mubarak, taking to the streets against the elected Islamist president who they accuse of betraying the revolution.

At least 91 civilians and 42 security personnel were hurt in violence across the country, officials said. Street battles erupted in Cairo, Alexandria, Suez and Port Said, where the Muslim Brotherhood's political party offices were torched.

Thousands of opponents of President Mohamed Mursi and his Muslim Brotherhood allies massed in Cairo's Tahrir Square - the cradle of the uprising against Mubarak - to revive the demands of a revolution they say has been hijacked by the Islamists.

The Jan. 25 anniversary showcased the divide between the Islamists and their secular foes that is hindering Mursi's efforts to revive an economy in crisis and reverse a plunge in Egypt's currency by enticing back investors and tourists.

Inspired by Tunisia's ground-breaking popular uprising, Egypt's revolution spurred further revolts across the Arab world. But the sense of common purpose that united Egyptians two years ago has given way to internal strife that has only worsened and last month triggered lethal street battles.

"It's definitely tense on the ground, but so far there hasn't been anything out of the ordinary or anything that really threatens to fundamentally alter the political situation," said Shadi Hamid, director of research at the Brookings Doha Center.

The Brotherhood decided against mobilising for the anniversary, wary of the scope for more conflict after violence in December that was stoked by Mursi's decision to fast-track an Islamist-tinged constitution rejected by his opponents.

The Brotherhood fiercely denies accusations of trampling on democracy as part of a smear campaign by its rivals.

Before dawn on Friday, police battled protesters who threw petrol bombs and firecrackers as they tried to approach a wall blocking access to government buildings near Tahrir Square.

Clouds of tear gas filled the air. At one point, riot police used one of the incendiaries thrown at them to set ablaze at least two tents erected by the youths, a Reuters witness said.

Skirmishes between stone-throwing youths and the police continued in streets around the square into the day. Ambulances ferried away a steady stream of casualties.

"Our revolution is continuing. We reject the domination of any party over this state. We say no to the Brotherhood state," Hamdeen Sabahy, a popular leftist leader, told Reuters.

There were similar scenes in Suez and Alexandria, where protesters and riot police clashed near local government offices. Black smoke billowed from tyres set ablaze by youths.

Police also fired tear gas to disperse dozens of protesters who tried to scale barbed-wire barriers protecting the presidential palace in Cairo, witnesses said. Other protesters broke into offices of provincial governors in Ismailia, east of Cairo, and Kafr el-Sheikh in the Nile Delta.

In Tahrir Square, protesters echoed the chants of 2011's historic 18-day uprising. "The people want to bring down the regime," they chanted. "Leave! Leave! Leave!" chanted others as they marched towards the square.

"We are not here to celebrate but to force those in power to submit to the will of the people. Egypt now must never be like Egypt during Mubarak's rule," said Mohamed Fahmy, an activist.

With its eye firmly on forthcoming parliamentary elections, the Brotherhood marked the anniversary with a charity drive across the nation. It plans to deliver medical aid to one million people and distribute affordable basic foodstuffs.

"The differences of opinion and vision that Egypt is passing through is a characteristic at the core of transitions from dictatorship to democracy, and clearly expresses the variety of Egyptian culture," he wrote.

His opponents say he and his group are seeking to dominate the post-Mubarak order. They accuse him of showing some of the autocratic impulses of the deposed leader by, for example, driving through the new constitution last month.

"I am taking part in today's marches to reject the warped constitution, the 'Brotherhoodisation' of the state, the attack on the rule of law, and the disregard of the president and his government for the demands for social justice," Amr Hamzawy, a prominent liberal politician, wrote on his Twitter feed.

The Brotherhood dismisses many of the criticisms as unfair fabrications of their rivals, accusing them of failing to respect the rules of the new democracy that put the Islamists in the driving seat via free elections.

Six months into office, Mursi is also being held responsible for an economic crisis caused by two years of turmoil. The Egyptian pound has sunk to record lows against the dollar.

Other sources of friction abound. Little has been done to reform brutal Mubarak-era security agencies. A spate of transport disasters on roads and railways neglected for years is feeding discontent as well. Activists are impatient for justice for the victims of violence over the last two years.

These include hardcore soccer fans, or ultras, who have been rallying in recent days to press for justice for 74 people killed in a soccer stadium disaster a year ago in Port Said after a match between local side al-Masry and Cairo's Al Ahly.

The parties that called for Friday's protests listed demands including a complete overhaul of the constitution.

Critics say the constitution, which was approved in a referendum, offers inadequate protection for human rights, grants the president too many privileges and fails to curb the power of a military establishment supreme in the Mubarak era.

Mursi's supporters say that enacting the constitution quickly was crucial to restoring stability desperately needed for economic recovery, and that the opposition is making the situation worse by perpetuating unrest. (Additional reporting by Ahmed el-Shemi, Ashraf Fahim, Marwa Awad and Shaimaa Fayed in Cairo and Yousri Mohamed in Ismailia; Writing by Tom Perry; Editing by Mark Heinrich) 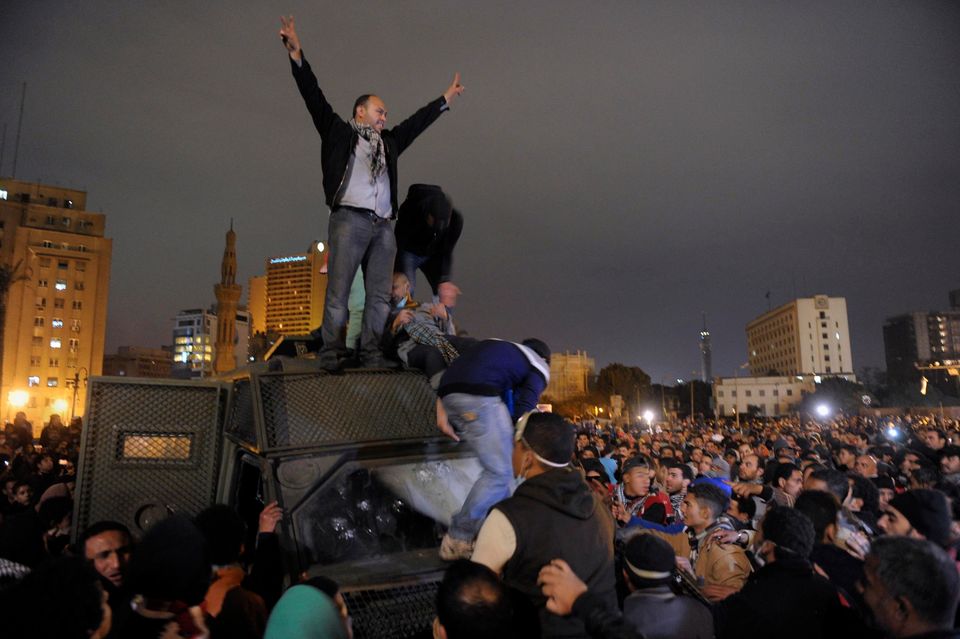 1 / 49
In this Monday, Jan. 28, 2013 photo, Egyptian protesters celebrate the capture of a state security armored vehicle that demonstrators commandeered during clashes with security forces and brought to nearby Tahrir Square in Cairo, Egypt. On Tuesday, Jan. 29, 2013. Egypt's army chief warns of "the collapse of the state" if political crisis continues. (AP Photo/Mohsen Bayoumy)
AP