Judgment comes in just a matter of days -- July 30 -- in the trial of us Al Jazeera journalists, after 19 months of a tormenting experience that has changed me and the lives of my loved ones forever.

Understandably, the world is preoccupied with news about nuclear deals, thugs who kill their own people under the perverted justification of jihad and the banner of Islam and the war on terror that has left many journalists -- myself included -- under constant threat by governments who consider us just collateral damage.

Among the 200 journalists globally who are now in detention just for doing their job, perhaps our case is one of the best examples of how journalism and politics overlap in the media landscape today. It's no secret that the government of Qatar, the owner of the Al Jazeera Media Network, is a die-hard supporter of the fundamentalist Muslim Brotherhood.

Was I overly ambitious as a journalist always out for a new challenge to take on the job of the Al Jazeera Bureau Chief of the English channel months after the ouster of the Brotherhood in 2013? After all, the Egyptian government banned and considered the Arabic arms of the channel as biased to the Islamic group and a clear supporter of its cause.

For that very reason I became hypercritical of my own work like never before. I went over in my mind every single bit of newsgathering, statistic, live broadcast and story that came out of our Cairo office. In all humbleness and after much reflection, I consider our reports -- which the Egyptian government alleges were biased and fabricated in favor of the Muslim Brotherhood -- to have been flawless.

And many months later, that assessment was validated by a technical committee of experts appointed by the judge in the retrial, who testified so to the court after reviewing the so-called video evidence.

I can't help but remember the ruling in our first trial, when I broke down in tears in prison knowing I could spend seven years of my life in a ruthless concrete jungle with ISIS fighters and jihadists. The look on my mother's face through the courtroom prisoners' cage as the judge announced the verdict still lingers in my memory, and fighting the policemen dragging me out of the dock as I clung to the bars is a scene I try to forget.

Early in the morning of Dec. 25, 2013 the Egyptian government declared the Brotherhood a terrorist organization. The moment is etched in my brain like it happened yesterday. I reported this critical development live as breaking news. My report also included the horrific details of a car bomb that left many police officers killed, which was the final straw that led to this official banning of the Brotherhood. I remember handing over the reporting to my colleague Peter Greste as we continued the coverage well into the morning from Cairo's Marriott hotel where we were arrested just four days later in a televised raid.

In hindsight, Greste, my Egyptian colleague Baher Mohamed and I had basically reported on what days later became the law that justified our unfair prosecution and imprisonment for more than 400 days.

Egypt, Saudi Arabia and the United Arab Emirates were out to eradicate the Muslim Brotherhood as an organization and an ideology in every way possible. Turkey and Qatar on the other hand formed a friendship, provided a safe haven for Brotherhood fugitives, granted them a political umbrella and funded various media platforms to spread their anti-government cause. We three journalists were thrown right in the mix of the proxy wars of the region.

For those just tuning in, our trial is worthy of an extended case study for legal experts, free speech advocates, human rights champions and politicians fighting over whom the terrorists are and which coalition to side with.

As we approach the new verdict on July 30, I can't help but remember the ruling in our first trial, that horrible day on June 23, 2014 when I broke down in tears in prison knowing I could spend seven years of my life in a ruthless concrete jungle with ISIS fighters and jihadists. The look on my mother's face through the courtroom prisoners' cage as the judge announced the verdict still lingers in my memory, and fighting the policemen dragging me out of the dock as I clung to the bars is a scene I try to forget.

We were the first journalists to be convicted with a seven-year sentence in a terrorism case in Egypt. Thankfully, on Jan. 1, 2015, Egypt's highest appeals court overruled the brutal ruling in our first trial for "lack of evidence." Still, they threw Baher and I back into the prisoners' cage for a grueling six-month retrial.

Our trial is worthy of an extended case study for legal experts, free speech advocates, human rights champions and politicians fighting over whom the terrorists are and which coalition to side with.

Interestingly, soon after our conviction was overturned, Egyptian President Abdel Fattah el-Sisi implemented a new decree to give him the power to deport foreigners to their countries to be tried there or continue their time behind bars. The national security officers who visited me during my incarceration had a clear message: "Drop your citizenship -- you and Greste will be booted out and spared the retrial or worse."

Indeed, it was the first time in Egypt's history that a foreigner (Greste) was deported during a trial, and a first for an Egyptian-Canadian (me) to renounce his citizenship to get out of jail. In a Kafkaesque turn of events where no one knows who is pulling the strings in the Egyptian world of "justice," my colleague Greste was deported to Australia while my deportation home to Canada was blocked. I was left behind to fight the battle with our third colleague Baher Mohamed, who only holds an Egyptian passport.

I remain thankful to my government in Canada for their efforts to extract me from this ongoing crisis regardless of their ability to succeed.

However, after my release on bail in February this year, the Canadian government left me without a passport for two months. The Egyptian authorities had lost my passport, which they had confiscated when I was first arrested. The friendly Canadian counselor team in Egypt informed me that it was the first time that Ottawa refused to grant its citizen abroad a replacement passport, despite the fact that I am on a no-fly list from Egypt. The diplomatic conservatism came at a time when I needed my passport to get married, conduct banking transactions and prove my identity at Egypt's hyper-paranoid police checkpoints.

Thankfully, in a rare action of unity, Canadian media and opposition parties united behind my basic right to carry a passport until finally the televised political ping-pong and questioning of Prime Minister Stephen Harper in parliament culminated with a victory: I received a new passport two months later.

I remain genuinely inspired by the unprecedented global support we garnered during our detention. The news that so many free speech advocates -- tens of thousands -- were fighting for us was a lifeline that slipped through to me through the cracks of the cruel concrete prison walls. That support for our free speech cause is what led me to launch a non-profit organization, the Fahmy Foundation based in Vancouver, to fight for journalists behind bars.

My clock is ticking. Time is close. Come judgment day, I dread becoming another statistic languishing behind bars, referred to by a hashtag on Twitter knowing that the outcome of the trial may have nothing to do with evidence but merely based on the political score settling between Qatar and Egypt.

As a realist, I know the true meaning of free speech does not exist, but I also believe we have to fight toward reform. I cringe as I witness Australia passing laws to access phone and Internet records with no apparent protection for journalists. I also get jitters reading about Canada's new Bill C-51, which not only limits free speech but also threatens basic civil liberties enshrined in the Canadian constitution. Indeed, the unprecedented tsunami of terrorism requires exceptional measures to preserve national security but not at the cost of our much needed oxygen that comes with our civil liberties. The terrorists I lived with for a year in prison literally cheered with celebration at the passing of such crippling laws -- we can't let them declare victory! Add to this that nightmare of a new bill, Bill C-24, which hit right home as it allows a Canadian federal government minister to strip a dual citizen of his Canadian passport if a suspect, like me, is "convicted" of terror charges. This law is simply dangerous as it denies citizens the basic rights of due process.

Indeed, there is a growing global epidemic of crackdowns on free speech. Egypt and Qatar are some of the worst abusers of these basic rights. One man that my foundation in Canada advocates for is the Qatari poet Mohammed Al Ajami who is currently serving a 15-year sentence for a verse in his poem criticizing the same emir of Qatar who markets freedom of speech at the United Nations. At least half a dozen Qatari journalists and writers were stripped off their citizenship for criticizing the ruling Al-Thani family and dozens more harassed by the country's state security apparatus.

You will not find much information on Al Jazeera's various news outlets about the romantic Qatari poet who had once studied in Egypt. In response to his imprisonment Al Ajami commented, "You can't have Al Jazeera in this country and put me in jail for being a poet."

Another victim of the crackdown is American journalist Jason Rezaian who has been stuck in an Iranian prison for over one year for bogus espionage charges. My foundation is also advocating for Rezaian, as we remain in regular contact with his family knowing he is yet another victim of politics gone sour.

My clock is ticking. Time is close. Come judgment day, I dread becoming another statistic languishing behind bars, referred to by a hashtag on Twitter knowing that the outcome of the trial may have nothing to do with evidence but merely based on the political score settling between Qatar and Egypt. What I know for sure is that our family of journalists will continue to fight for Baher Mohamed and myself should we end up in prison until we are freed.

Ottawa has thankfully stepped up its game since earlier this year. The Harper government continues to cooperate with my lawyer Amal Clooney in preparing once again for the worst case scenario where we will fight for deportation to Canada should the judge once again decide to punish my dubious employer, Al Jazeera, by silencing me.

It will be much harder this time around to get locked up for a crime I didn't commit after tasting freedom.

Caught Between Egypt, Qatar and the Struggle for Free Press
Peter Greste, Al Jazeera Journalist, Freed From Jail In Egypt 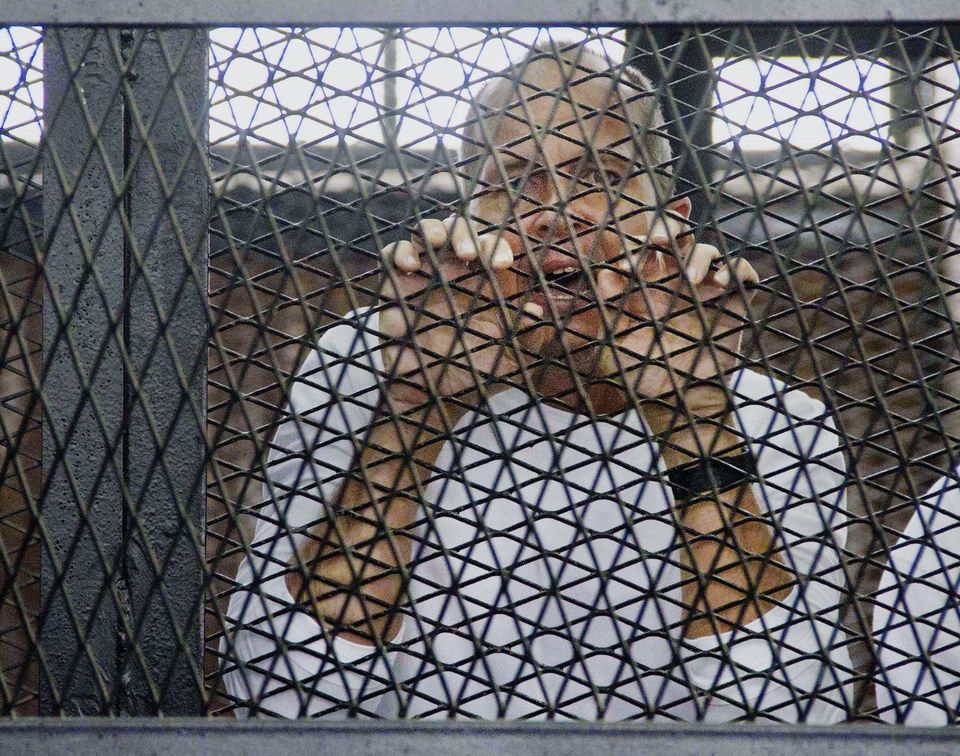 1 / 22
Mideast Egypt Al Jazeera
FILE - In this Saturday, May 3, 2014 file photo, Al-Jazeera's award-winning Australian correspondent Peter Greste, appears in a defendants' cage in a courthouse near Tora prison in Cairo, Egypt. A senior Egyptian prison official and the country's official news agency say Greste has been freed from prison and is on his way to Cairo airport to leave the country. (AP Photo/Hamada Elrasam, File)
ASSOCIATED PRESS