CAIRO (Reuters) - Thousands of Egyptian protesters angered by President Abdel Fattah al-Sisi's decision to hand over two islands to Saudi Arabia called on Friday for the downfall of the government, chanting a powerful slogan used in a 2011 uprising.

Sisi, who once enjoyed widespread support, has faced mounting criticism in recent months, including over his management of the economy.

"The people want the downfall of the regime," the protesters yelled outside the Cairo press syndicate, using the same phrase heard during the 2011 revolt against president Hosni Mubarak who later stepped down.

They also chanted: "Sisi Mubarak", "We don't want you, leave" and "We own the land and you are agents who sold our land."

Woman outside Press Synd: "Those islands are just the tip of the iceberg, everything else is also wrong in Egypt" pic.twitter.com/J4juAOdj8M

Sisi's government announced last week the signing of a maritime demarcation accord that put the uninhabited Red Sea islands of Tiran and Sanafir, which lie between Saudi Arabia and Egypt's Sinai Peninsula, in Saudi waters, prompting an outcry in Egyptian newspapers and on social media.

Saudi and Egyptian officials say the islands belong to the kingdom and were only under Egyptian control because Saudi Arabia had asked Cairo in 1950 to protect them.

A Reuters witness said a crowd was dispersed and riot police had taken control of an area outside a mosque in the Mohandiseen district of the capital. Four people were arrested, the security sources said.

Critics say the government has mishandled a series of crises from an investigation into the torture and killing of an Italian student in Cairo to a bomb that brought down a Russian airliner in the Sinai last October.

Many Egyptians, eager for an end to the turmoil triggered by the 2011 uprising against Mubarak, enthusiastically welcomed Sisi when he seized power from the Muslim Brotherhood in 2013 after mass protests.

As military chief, Sisi toppled Egypt's first freely elected leader, and then went on to become president on promises of stability after launching the fiercest crackdown on dissent in modern Egypt's history.

Egyptians turned a blind eye as Islamists and other opponents of the government were rounded up, swelling prisons to about 40,000 political detainees, according to estimates by human rights groups.

But a growing number of Egyptians are losing patience over corruption, poverty and unemployment, the same issues which led to Mubarak's downfall, while Sisi has appeared increasingly authoritarian in televised speeches.

"We want the downfall of regime. We have forced disappearances, all the youth are in jail. I just got out of jail a year ago after two years inside," said Abdelrahman Abdellatif, 29, an air conditioning engineer, at the press syndicate demonstration.

"The youth of the revolution are still here. We are not gone. We want stability but that doesn't mean sell our land and kill our youth. We are experiencing unprecedented fascism and dictatorship."

There were also Sisi supporters, such as a woman with a shirt with an image of the former military intelligence chief on it.

In Alexandria, around 500 people gathered near a railway station. Meanwhile 300 Sisi supporters holding up photographs of him protested outside a mosque in the port city.

Calls for protests have gathered thousands of supporters on Facebook, including from the outlawed Brotherhood, which accused Sisi of staging a coup when it was ousted and rolling back freedoms won after hundreds of thousands of Egyptians protested five years ago in Cairo's Tahrir Square against Mubarak. 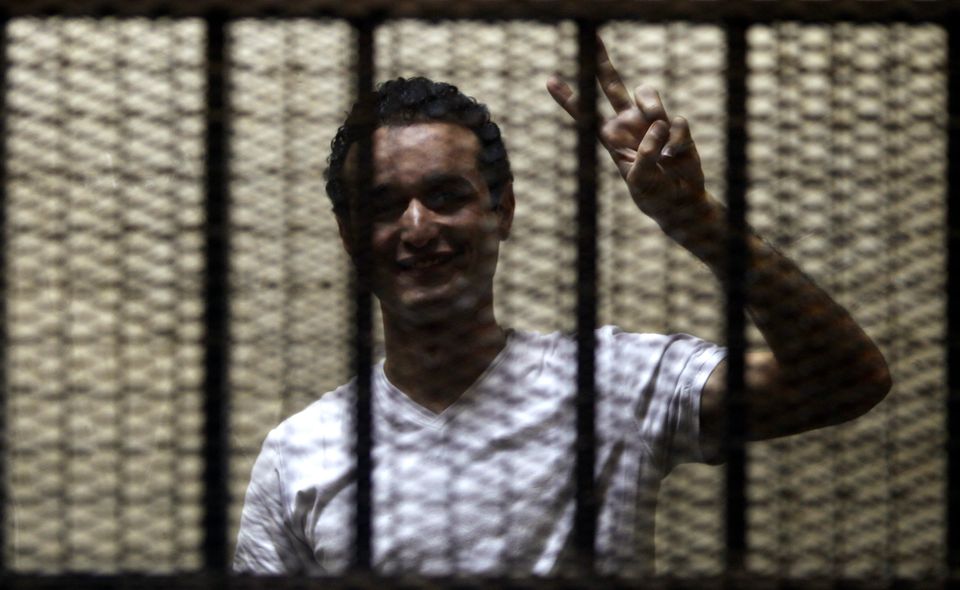