Egyptian street artists created many of the enduring images of the country's 2011 revolution, splashing the streets with expressions of dissent, satire and hope. But since authorities launched a fierce clampdown on dissent after the fall of President Mohammed Morsi last summer, the country's street artists have been forced to get a lot more creative.

When street protests backed by the military toppled Morsi in July 2013, the president's followers in the Muslim Brotherhood refused to give up, staging massive weekly rallies and sit-ins. Egypt's military leaders answered with brutal force, launching a fierce crackdown against dissent in general and against the former leader's supporters in particular. Thousands of members of the Brotherhood were arrested, journalists critical of the government went to jail and demonstrations were effectively banned in November.

Egyptian street artists say they have been caught in the crossfire. Artists fear being mobbed by government supporters on the streets, as the tense public mood increasingly associates graffiti with violent opposition to the state, according renowned Egyptian visual artist Ganzeer.

Meanwhile, Egypt's government drafted a law imposing hefty fines or a jail term for "abusive graffiti." People detained for anti-military graffiti include a 17-year-old girl who painted slogans on the walls of her school.

"People are intimidated," Ganzeer told The WorldPost, describing a recent visit by state security officers to his home. In response, he describes becoming more "stealthy."

For example, artists might make a piece that looks like it supports the military and change it to something else at the last minute, or get someone to deflect attention by painting a much larger mural nearby. Brazenly working under the noses of the military also helps, Ganzeer said: "No one expects anyone to have the nerve to do it with tanks at the end of the street." 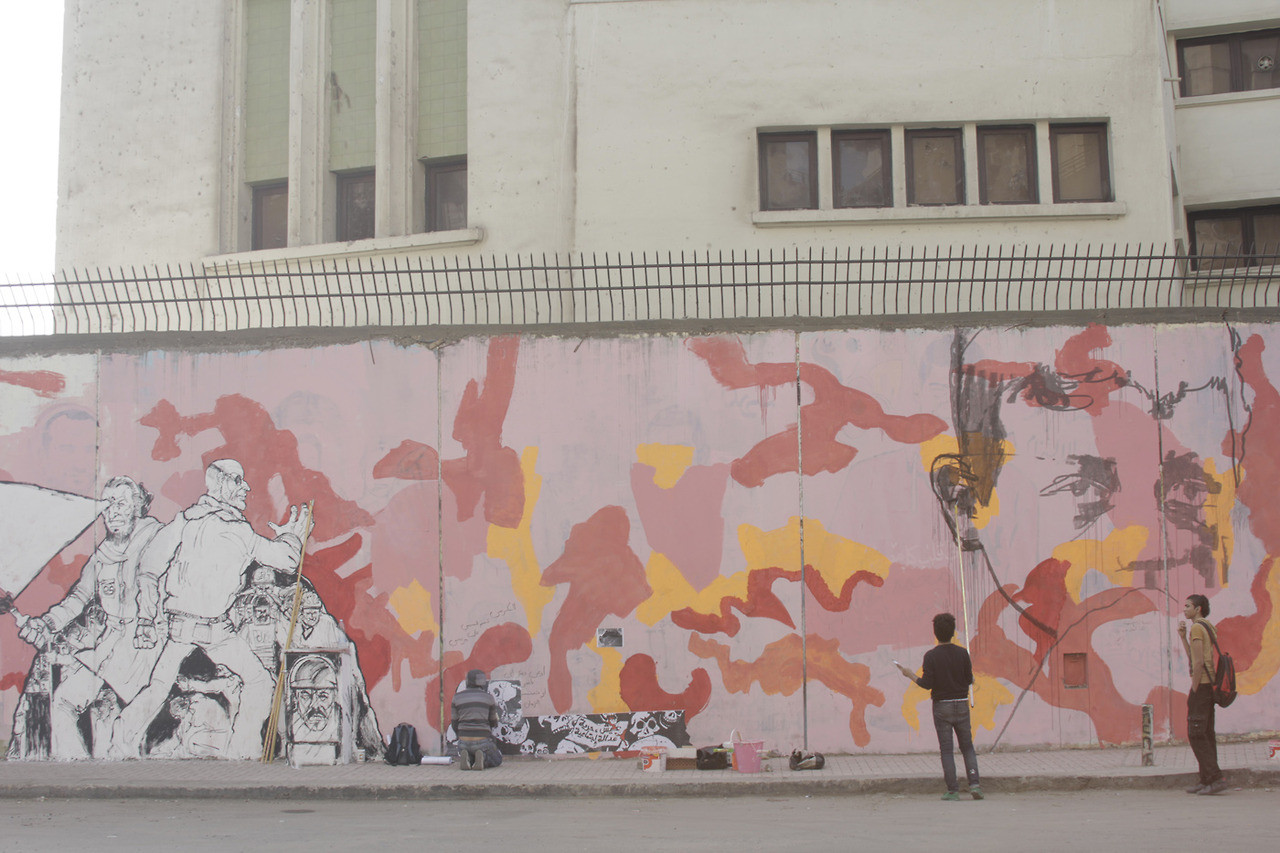 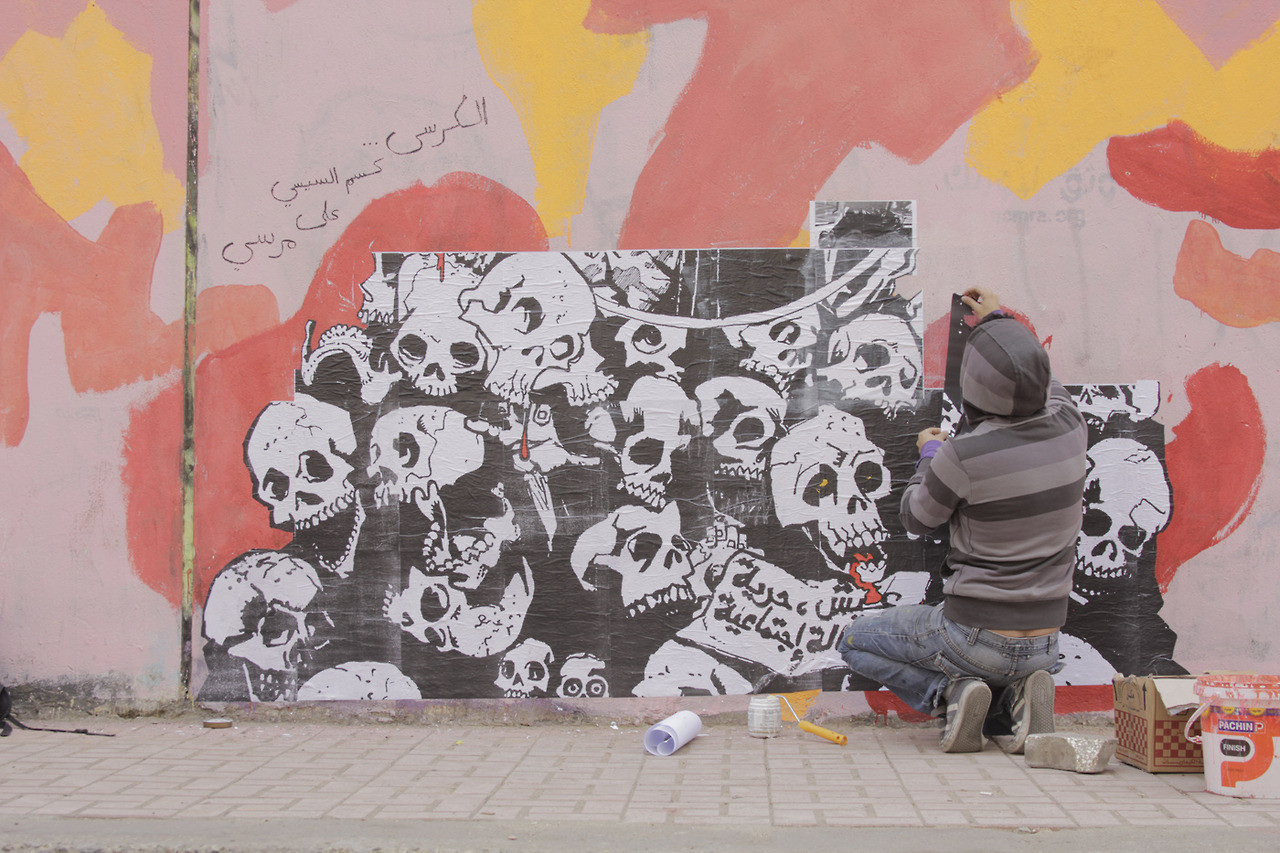 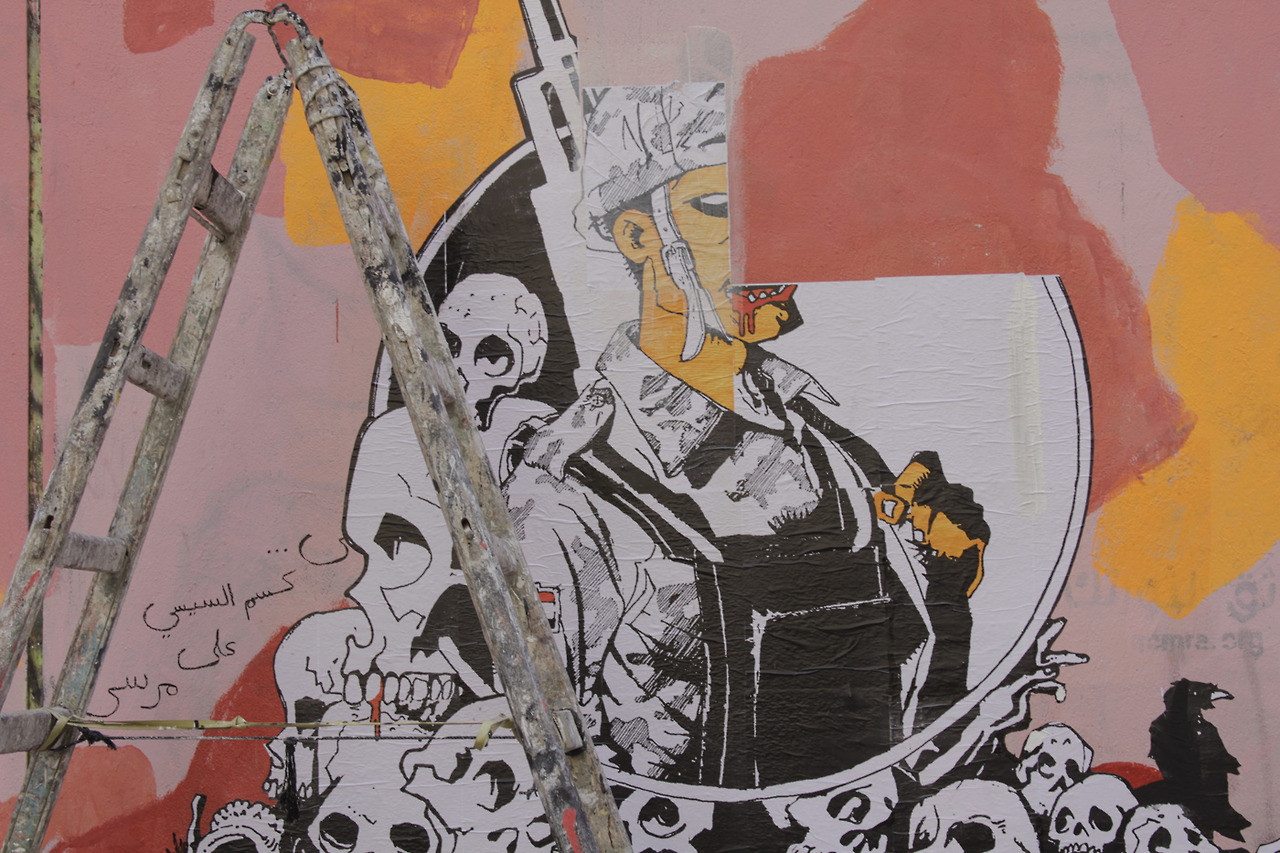 Ganzeer paints the mural "Army Above All" in Cairo, November 2013. (Photos: Ganzeer.com)

Ganzeer was a graphic design artist and painter when Egypt's 2011 revolution propelled him into the street art scene. A few months later he was briefly arrested for hanging posters mocking the military government that took over in the wake of President Hosni Mubarak's removal. Today, he says artists have to be even more careful about when and what they spray.

"Before, if you were stopped by a cop you could smooth talk your way out of it, saying this is actually in support of the government," Ganzeer said. "This law is telling police to arrest anyone who does any sort of graffiti, because its safer that way for the government."

Artists have to be especially vigilant when taking on General Abdel-Fattah el-Sissi, the military leader behind Morsi's removal from power who is now the front-runner in the country's presidential election. Street artists no longer use Sissi's name lightly, and for good reason, Ganzeer says: "You're going to spend your whole life in prison."

While Ganzeer is as critical of the Muslim Brotherhood's role in government as he is critical of the military's, he says there is little room for subtlety in today's Egypt. "Any kind of opposition, people say 'these are terrorists,'" he remarked.

However, street artists outside Egypt can speak more freely.

In recent weeks, European and U.S.-based street artists have created anti-Sissi artwork, and erected murals in New York and Paris. International Street Artists In Solidarity and Occupy London activists penned an open letter in April blaming Sissi for obliterating dissent in Egypt and urging the international community to isolate him. 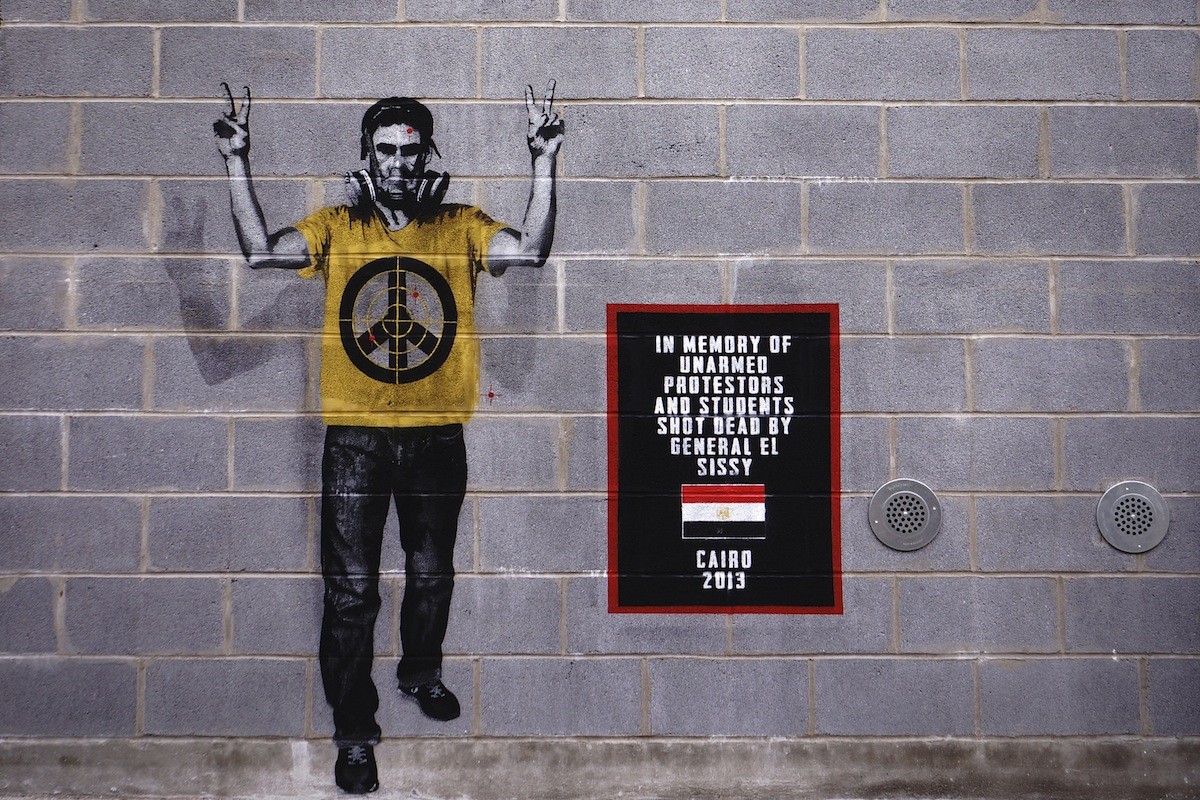 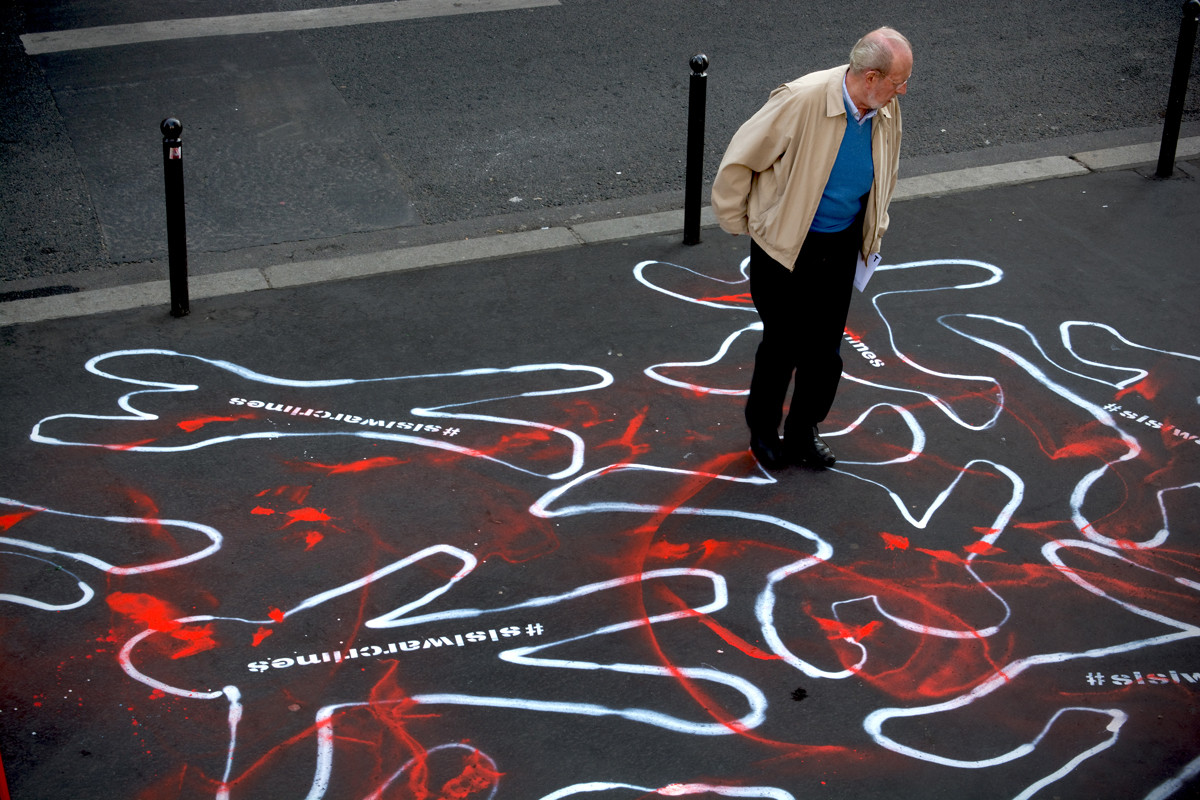 Art by Sampsa in support of Egypt in Paris, France. (Photo: Anni Maarit)

"Protester" by Norwegian visual artists DOT DOT DOT and SinnSykShit for an exhibition in Stavanger in June. (Source: DOT DOT DOT on Instagram)

The international campaign emerged from a friendship that was forged by chance last August, during Egypt's bloody crackdown on an opposition protest camp.

Ganzeer was in Helsinki at the time, working with Sampsa, a Finnish street artist well-known for his activism against anti-piracy laws . During their collaboration, the Rabaa al-Adawiya sit-in in Cairo was stormed, and the gruesome images of hundreds of dead protesters made Ganzeer too depressed to work. Sampsa was shaken by his Egyptian friends' experience. "I don't think I've ever seen a group of people so helpless, watching their country fall apart ... it was disheartening," Sampsa told The WorldPost.

So when Egyptian street artists came under threat, he took their cause global, drumming up support with the hashtag #Sisiwarcrimes.

Sampsa said he was humbled by just how high the stakes were for Egyptian street artists. While his campaign helped shape Finland's copyright laws, "These guys are using street art to change an entire country," he said.

Some Egyptian street artists appear to be braving the crackdown to take part in the international campaign, according to a recent video of undercover stenciling, but Ganzeer says that they will have to be more stealthy than ever.

See below for videos of the street artists at work in Egypt, Paris and Brooklyn.

Video purportedly from Egypt of a street artist painting a #Sisiwarcrimes mural.

Video of Sampsa's work in Brooklyn and Paris.