CAIRO -- At the foot of Mohamed Mahmoud Street, just a few feet from the resounding crowds in Tahrir Square, a group of people gathered around a man holding four canisters above his head.

"Where are they from, America?" people asked, already knowing the answer.

"Yes, America," the man replied furiously. The crowd murmured with unsurprised disdain. Like many gas canisters in Tahrir, one of his was marked with blue letters that read "Made in USA" and bore the name of the company that produced it: Combined Tactical Systems, in Jamestown, PA.

For days, similar scenes have played out across Tahrir. Tear gas has become a persistent companion in the square, a troublesome cousin who crashes on the couch and fails to leave. Wafting in from the clashes up the street -- except in a few rare instances where it has been fired directly onto the square -- the gas lingers in the air, causing, from afar, noses to run and a sour taste in the mouth.

But the added indignation of an American connection -- on the street, protesters insist it is more like collusion -- is a potent blow.

"You know where this is from," another man, standing next to a field clinic across the street, said with a glare Wednesday, as he held up a thick metal canister shaped like a short bottle of spray paint.

"This is from America. America sent it to bomb Egypt."

Nearby, an 18-year-old in a red soccer jersey sat slumped on the sidewalk in the clinic, pawing at his eyes and moaning. He had been pulled from the fray a few minutes earlier, where the gas was much more intense. The burning sensation had briefly rendered him unable to speak. Now and then, a nurse came by and poured a homemade solution -- a mixture of antacid, topical anesthetic, and saline -- from a reused bottle of Dasani water over his face.

"It feels like my eyes are burning," the boy, who said he was from Giza, cried out after he had finally composed himself. "I can't open my eyes, I can't breathe. The gas they're using, it's different from before. I don't know where they got it from, but it's really different -- and it takes a lot longer to heal."

All day Wednesday, as the fighting around the square reached its 100th hour, people with severe cases of gas exposure -- not to mention rubber-bullet wounds -- came streaming into field clinics and dozens of first aid stations scattered near the combat zone.

At the corner of Tahrir Street and Yousef el Guindi Street, not far from the front lines, a young man wearing a white lab coat spattered with blood struggled to find a moment of peace to explain what he'd seen these past few days.

"I'm so tired," he said, with a weary smile. Suddenly, a motorbike careened up to the curb, ferrying a boy in a black sweatsuit. The fighters around Tahrir have established a makeshift ambulance system for the combat zone, with pairs of men on motorbikes who race in and out of the fight, and deliver the injured -- upright, and sandwiched between them -- to the nearest doctor.

The boy tumbled onto the rug that demarcated the first aid station.

"Hold on," the doctor said as he raced over to his new patient, grabbing him by the shoulders. "Stay awake! Stay with me," he yelled. The patient only had a rubber bullet wound on his leg, but he was young, perhaps just 15 years old, and he wailed in pain. The doctor and his two nurses sprayed him with an antibiotic foam, and sent him down toward the larger field clinics in the square.

"That was one of the easiest cases I've had yet," the doctor said when he came back. He introduced himself as Ali Sharif, and said that he was actually just a third-year medical student. He is 19 years old.

Another motorbike pulled up, this one ferrying a balding, middle-aged man in a tracksuit who had clearly succumbed to tear gas inhalation. The man was red in the face and his body sat rigidly between two people riding the motorcycle-ambulance; when it stopped, he nearly keeled over. Sharif huddled over him, urging him to cough, while the man spit up phlegm onto the sidewalk. Sharif signaled for another motorcycle, waiting nearby, to shepherd the man to a better-equipped clinic.

"That man has a heart condition, so I told him I couldn't treat him here," Sharif said when he stood back up. "Ninety percent of the cases we see of people injured are from tear gas, just normal cases. But since last night, a lot of what they've used is some other kind of gas, it's much stronger. When we start first aid the patients seem normal, but then after a while they start screaming and they lose control over their bodies, and start shaking."

Sharif is one of many around Tahrir who insist that the security forces have recently begun using a more potent form of the gas -- CR, rather than the typical CS -- or perhaps even nerve agents. (He says he has a canister of "nerve gas" that was made in China at his home.)

Unlike CS, which is commonly used by police and military forces around the world, CR has been connected with fatalities in the past, and evidence exists it may be a carcinogen. The United States military has ceased using CR out of health concerns.

So far, however, conclusive evidence about the use of other gases has proven nearly impossible to find.

"So far we have only seen [canisters] with CS on them," said Karim Medhat Ennarah, a political and security reform researcher for the Egyptian Initiative for Personal Rights, which has spent the past two days seeking evidence of other forms of gas being used.

The Guardian recently reported that many sources have complained that protesters are suffering from effects more commonly associated with powerful gases like CR, but the paper was unable to confirm the existence of canisters with those letters on them. In several hours looking around Tahrir, The Huffington Post only came across canisters marked CS, as well as a few that were unmarked. Heba Morayef, a researcher with Human Rights Watch who has also been investigating the reports, said that the unmarked canisters are likely Egyptian-made.

Instead, it seemed more likely to observers and human rights investigators that most of the severe cases of tear gas exposure come from the tendency of riot police to fire four or five rounds of gas at a time, and from the fact that most of the skirmishes are taking place in narrow, confined alleyways.

"What we can say beyond doubt is that it's definitely excessive use of tear gas and that's probably behind a lot of the problems it's causing," Ennarah said. "It can be used for crowd dispersal, but they seem to be using it as a kind of punishment."

The U.S. State Department denied on Tuesday that the gas was purchased with American "security assistance funds," but did acknowledge that direct sales between the government and American companies have been authorized in the past.

The use of American-made tear gas has only compounded the sense among many of Tahrir's most ardent protesters that the United States plays a malicious role in Egyptian politics, seeking to reinforce the status quo -- in this case, the military, which they have good relations with -- rather that supporting the aspirations of demonstrators.

Over the past several days, Tahrir and its surrounding areas have become an increasingly unwelcome place to foreigners, with many foreign reporters describing xenophobic exchanges, and being subjected to random credential checks. Direct attacks on foreign journalists by the crowd have remained at a minimum.

From the start, the U.S. State Department has delivered tempered remarks on the contest between demonstrators and riot police, initially calling for restraint from "all involved," and urging "everybody" to focus on the nation's first democratic parliamentary elections, which are still scheduled to begin on Monday.

The U.S. government faces a particularly difficult challenge in Egypt because it has long backed the forces of stability -- first Hosni Mubarak, now the military regime -- as a bulwark against the rise of militant Islam. Now, the parliamentary elections which begin on Monday are expected to deliver a majority to the conservative Muslim Brotherhood, something the U.S. does not appear to mind so long as a friendly military government is there as a steward.

On Tuesday, State Department spokesman Victoria Nuland directed her message more sharply to the Egyptian government, saying, "We condemn the excessive force used by the police."

But she also backed the speech of Field Marshal Mohammed Hussein Tantawi, the current leader of the military regime ruling the nation, who addressed the nation Tuesday night and pledged to complete the transfer of power to civilian hands by mid 2012. (When the speech concluded, security forces once again barraged Tahrir with tear gas.)

For those like Ali Sharif, standing at his corner medical station, the struggle is far from over.

"I've been here nonstop since Saturday, except for only four hours of sleep," he said. "Sometimes I wish they would all just go home, so that I could too."

Sharif laughed. In fact, he doesn't want the struggle to end -- "I'm doing this for Egypt," he said -- but he does sometimes find himself yelling at the young fighters who keep making their way back to his station to find another use for their time.

"I tell them I'm getting tired of seeing them," Sharif said. "But they never listen to me. They all go back." 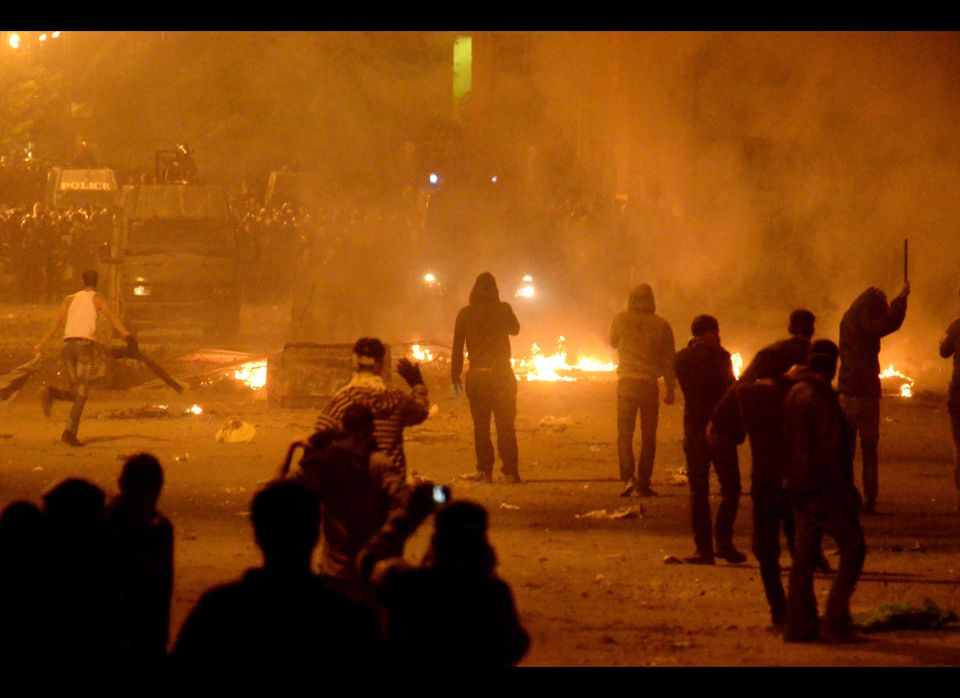 1 / 43
Egyptian riot police are seen in the background as protesters demonstrate outside the northern military command headquarters in the Mediterranean port of Alexandria on November 22, 2011 to demand an end to military rule, heightening tension after days of deadly clashes that threaten to derail next week's legislative polls in Egypt. (Getty)
Getty