WASHINGTON -- A report in an Egyptian newspaper that claims the United States has approved new shipments of tear gas to Egypt under the strict, and potentially incendiary, condition that the canisters not indicate where they came from has some arms control experts concerned about a precedent-setting lack of transparency.

The report, which surfaced late last week, cited internal memos between two Egyptian ministries explaining that a recent shipment of CS riot gas had been delayed after American officials allegedly demanded that any reference to the United States be scrubbed from the canisters.

"The US government was stringent in issuing export permits for Egypt," wrote the Interior Ministry's Major Gen. Magdy al-Gohary in one of the memos, according to the Egypt Independent. "The permit from the US government was obtained after removing the company's name and country of origin written on the items."

On Monday, State Department spokesman Patrick Ventrell confirmed that the shipment had been approved, but denied that any orders to remove identifying language from the canisters came from the U.S. government.

"We did not advise the manufacturer to remove 'Made in the USA' from its labels," Ventrell said. "We refer you to the manufacturer on the labeling of their products. But that was not a request from us."

Combined Systems Inc., the Jamestown, Pa., company that has manufactured tear gas sent to Egypt in the past and that was specifically mentioned in the new Egyptian government memos, declined repeated requests over two days to make an official available for comment. Reached at his home on Monday night, Brenden Frisk, an international account specialist with the company, also declined to discuss the reports. "We have no comment at this time," he said repeatedly.

The murkiness of the issue has prompted at least one lawmaker, Sen. Patrick Leahy (D-Vt.), to write to Secretary of State John Kerry asking for clarification, Leahy's office confirmed on Wednesday. Leahy chairs the powerful Senate Appropriations subcommittee that oversees spending on foreign operations.

The use of American-made tear gas, with the name and address of the manufacturer printed in bold on the canisters, was a source of significant consternation and embarrassment for U.S. officials in the months after the 2011 revolution in Egypt, when police frequently deployed tear gas during clashes with protesters in and around Cairo's Tahrir Square. At the time, spent canisters of American-made tear gas were a ubiquitous sight in Tahrir Square, with many casting blame on the U.S. government for supporting the repression of popular protest.

Human rights monitors have repeatedly decried the sale of tear gas and other nonlethal military supplies to repressive regimes in the Middle East, especially in Bahrain, where those supplies have helped the kingdom tamp down an Arab Spring-style uprising. The vague markings on used canisters of tear gas produced in countries other than the United States have also elevated fears that authorities were firing more dangerous chemical agents, heightening the risk of panic and chaos.

American exports of military-type supplies are regulated by U.S. law and international treaties, the latter of which typically include provisions mandating appropriate labeling of those items. But neither domestic law nor international pacts include tear gas among the items covered by those rules, and the State Department said Tuesday that U.S. law includes "no legal requirements for U.S. defense manufacturers to label the country of origin on their products."

"I think it should be marked, but it's not very realistic," said Efrat Asif, an arms trafficking expert at the Interdisciplinary Center in Herzliya, Israel. "Many countries were not interested in an obligation to mark ammunition."

Arms control experts say that if the labeling information was removed from those tear gas canisters sent overseas, the effect would be to make it harder for Egyptians to know what role the U.S. is playing in their country -- and harder for Americans to monitor their government's sale of weapons to foreign countries.

"There is an interest on the part of the civil society community to be able to make some kind of analysis of whether or not these transactions are taking place and whether they meet their own country's standards," said Mark Bromley, a senior researcher in the arms transfer program at the Stockholm International Peace Research Institute.

But Oliver Sprague, program director for military security and police at Amnesty International, said that simply scrubbing the manufacturer's name off the canister won't prevent arms analysts from figuring out who produced it. They can identify it through characteristics such as the shape of the shell and the chemical makeup of the smoke.

"Markings of identification of products of this nature are really important, so anything that obfuscates that is a problem," Sprague said. "But if they just took the company details off, we would still eventually find out who actually made it. It's a bit of a hollow gesture."

This story has been updated with Sen. Patrick Leahy's response to the tear gas claims. 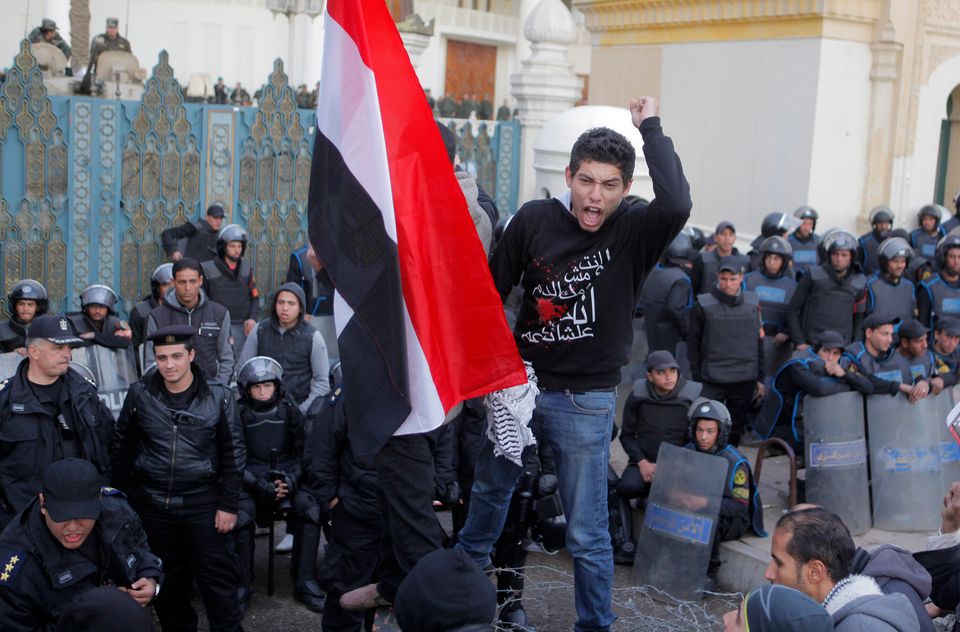