It was a new slogan. I don't recall ever hearing it before in a demonstration. It is rhythmic, in proper Arabic in fact, but most of all -- it is a slogan that started with "the people demand." One that all could agree on.

But let no one say that the Revolution -- if successful the media will give it a name later, after a flower or a color or an iPhone application -- didn't have clear demands. 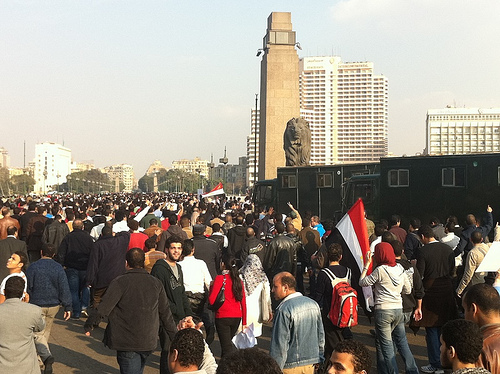 The people demand the end of decades of emergency rule, which allows among other things for any citizen to be detained, for no reason, for 30 days -- indefinitely renewable. Of a regime whose thugs have murdered Khaled Said in cold blood in the streets of Alexandria. Of endemic corruption by the government, whose goons combine economic and political power to ensure monopolies, break up competition, dismantle and sell state assets for their own enrichment purposes.

The end of violent crackdown on political and thought dissent. For the release of all political prisoners, of journalists, of members of the civil society. For the end of police violence and impunity. For the dismantling of an opposition-free Parliament no-one elected, and the accountability of an executive we never chose.

For increasing staple food prices which were never met by an increase in minimum wage. For the millions of people, in the capital and beyond, who live without basic services, sometimes in inhumanely precarious areas.

It's all that and more. For the crowd braving a violent police and a cold January night, it all met in that very slogan: "the people demand the fall of the regime".

Tens of thousands of demonstrators took the street on January 25th, in which Egypt celebrates Police Day -- when, back in 1952, the police were on the side of the people, not against them. All across the country, people united in their call for freedom. And sang a national anthem which had never meant more. 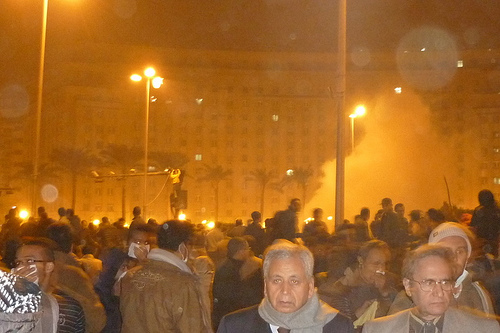 A day-long protest -- no less than 14 hours -- which was met at times by a police force helpless in front of numbers far bigger than they were trained to contain, and which reacted, in many instance, with violence -- first water cannons, then tear gas canisters which were initially shot up in an elliptic trajectory, then horizontally, Israeli-style, straight into the demonstrators. The police has several hundred thugs in plain clothes in the midst of the demonstration, who's role was to attempt to poison an already tense standoff, to the point where their fellow policemen would find an excuse to use violence.

We could see them arriving in police cars and trucks, and walk across to the police side of the barricade for rest and food.

Rest and food they wouldn't let demonstrators have. The police had fast-food stores around Tahrir square, where most demonstrators were congregating, shut their doors -- it was confirmed to me by one of the restaurant workers. (They did however keep the McDonald's across from the American university open for their own dining purposes). I also saw the police chase down, viciously tackle and arrest a man carrying several boxes of cookies and biscuits for the demonstrators.

But solidarity is stronger than their batons. People joyfully shared their food and water. Some went and bought food to distribute, to perfect strangers. Some collected money and bought blankets -- insufficient for the thousands of demonstrators who planned on spending the night, but the gesture was heartwarming enough.

A little before 1 AM, the police decided to move full on -- tear gas was fired at what may only be deemed an insane rate, probably 15 canisters a minute, and advanced with their armoured vans into a peaceful -- and exhausted -- mass of demonstrators sitting in the square. That violent dispersion of the demonstration was not sufficient for them: the police chased demonstrators in side-streets, and away from the mass and the media, revealed its true colours. People were chased with violent soldiers wielding batons and throwing stones. More thugs -- better armed this time- - kept arriving all the way into 2 AM. In the backdrop a tear-gassed moon you could see a few unarmed youngsters attempting to defend themselves from police soldiers in full riot gear. 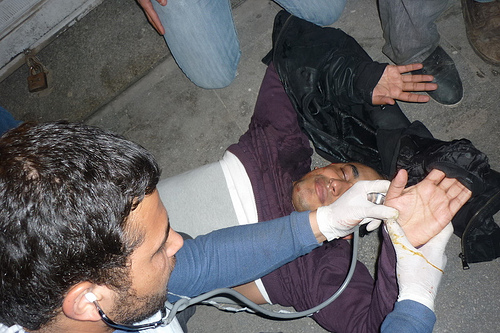