CAIRO -- Abdel-Fattah el-Sissi, the former military chief expected to win this week's presidential elections in a landslide, recently voiced his hope that at least 40 million out of the country’s 54 million voters would cast ballots.

“The significance of the ballot box is that there is a consensus on a national level that reflects the strength of the will to depart to the future,” he said in a televised message late last week.

But as the second day of voting comes to a close on Tuesday, election monitoring groups have reported low voter turnout. While some polling stations were bustling with eager voters chanting el-Sissi's name, others were nearly empty. Some critics of the government are boycotting the elections because they say it manufactured el-Sissi's rise to power, and many say they have lost faith that their vote would have any impact on the outcome.

In an attempt to drive people to the polls, the Presidential Election Commission made a last-minute announcement here on Tuesday evening that elections would be extended for a third day. The move comes after Prime Minister Ibrahim Mahlab announced that Tuesday would be a national holiday so public workers would have the day off to vote. Egyptians who don't cast ballots will reportedly face a fine of 500 Egyptian pounds, or roughly $70.

It is widely expected that el-Sissi will win the election by a landslide over his leftist opponent, Hamdeen Sabahi, but he was banking on an overwhelming show of support at the polls. Last July, after ousting Islamist President Mohammed Morsi and becoming Egypt’s de facto ruler, el-Sissi called on the Egyptian people to fill the streets and give him a mandate to fight terrorism. The leader has expressed hope that this week’s election would be a similar mandate for him to assume the presidency.

“A low voter turnout strikes at the heart of the carefully constructed narrative that the army’s removal of Morsi was due to popular pressure,” said Yasser El-Shimy, a Boston University teaching fellow with a focus on Egyptian politics who formerly served as the International Crisis Group’s Egypt analyst. “Sisi needs to at least match Morsi’s number to have any claim of legitimacy to rule Egypt.”

After the first day of voting on Monday, several high-profile media figures on popular television shows attacked Egyptians who didn’t vote. Some stations have characterized election boycotters as traitors.

“I’m willing to cut my veins for the country,” one television anchor said angrily on the talk show Al Qahera Al Youm. “Right now on air for people to go down and vote.”

Television anchor Tawfiq Okasha, infamous for his often-heated rants on the political commentary channel Faraeen, slammed those who didn’t vote and called them lazy.

To the woman who took the day off from work and went shopping or cooked instead of voting, Okasha had simple advice: “She should shoot herself!”

Election results are expected on June 5. 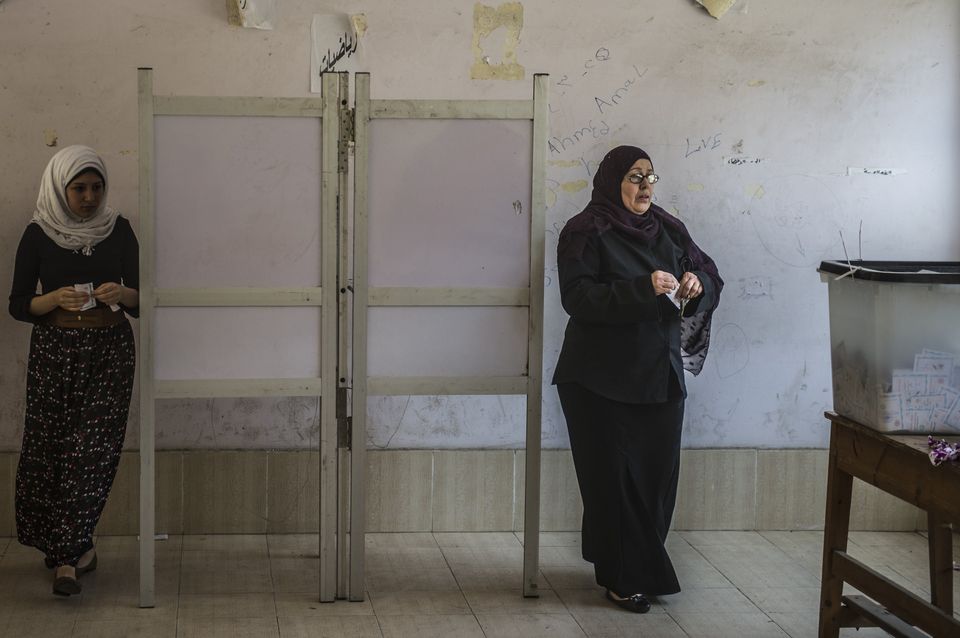