A newly discovered Egyptian carving, which dates back more than 3,300 years, bears the scars of a religious revolution that upended the ancient civilization.

The panel, carved in Nubian Sandstone, was found recently in a tomb at the site of Sedeinga, in modern-day Sudan. It is about 5.8 feet (1.8 meters) tall by 1.3 feet (0.4 m) wide, and was found in two pieces.

Originally, it adorned the walls of a temple at Sedeinga that was dedicated to Queen Tiye (also spelled Tiyi), who died around 1340 B.C. Several centuries after Tiye's death — and after her temple had fallen into ruin — this panel was reused in a tomb as a bench that held a coffin above the floor. [See Photos of the Egyptian Carving and Sedeinga Tomb] 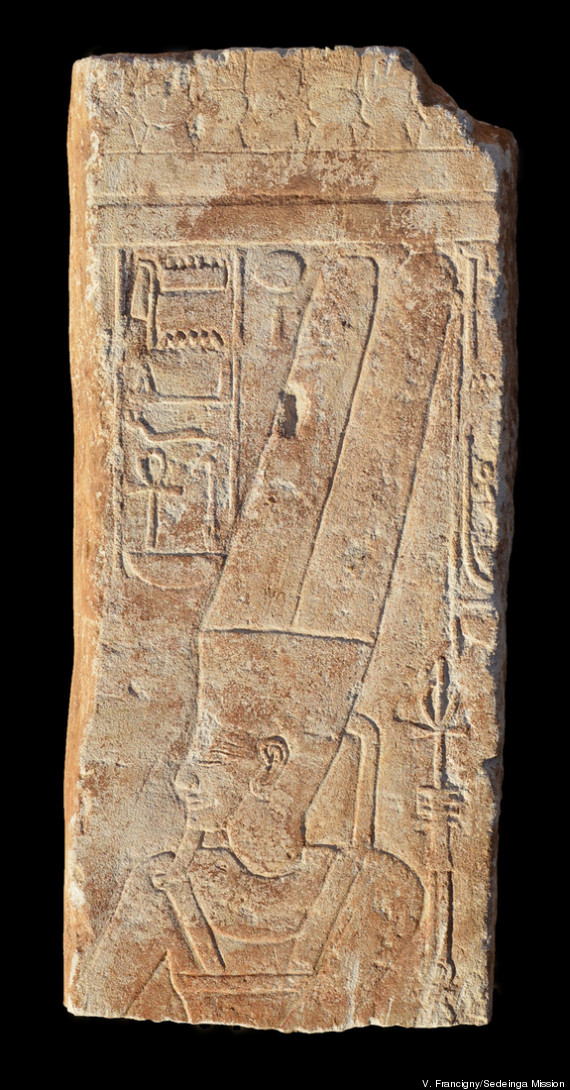 Here, the upper part of the Egyptian carving, showing the hieroglyph of Amun (top left); the hieroglyph and the god's face were hacked out on orders of pharaoh Akhenaten (reign 1353-1336 B.C) and were later restored.

Scars of a revolution

Archaeologists found that the god depicted in the carving, Amun, had his face and hieroglyphs hacked out from the panel. The order to deface the carving came from Akhenaten (reign 1353-1336 B.C.), a pharaoh who tried to focus Egyptian religion around the worship of the "Aten," the sun disk. In his fervor, Akhenaten had the name and images of Amun, a key Egyptian god, obliterated throughout all Egypt-controlled territory. This included the ancient land of Nubia, a territory that is now partly in Sudan.

"All the major inscriptions with the name of Amun in Egypt were erased during his reign," archaeology team member Vincent Francigny, a research associate at the American Museum of Natural History in New York, told Live Science in an interview.

The carving was originally created for the temple of Queen Tiye — Akhenaten's mother — who may have been alive when the defacement occurred. Even so, Francigny stressed that the desecration of the carving wasn't targeted against Akhenaten's own mom.

Today, only one column and a plethora of blocks survive from Queen Tiye's temple, which has not been excavated, Francigny said.

The archaeologists also found that, after Akhenaten's death, the god's face and hieroglyphs on this carving were restored. This restoration may have been done during the reign of the boy king Tutankhamun (reign 1336-1327 B.C.), who is famous for his rich tomb.

"The name of Amun as well as his face were first hammered out and later carved anew, proving that the persecution of this god extended to this remote province during the reign of Akhenaton and that his images were restored during the following reigns," Francigny and Claude Rilly, director of the French archaeological mission in Sedeinga, wrote in the most recent edition of the journal Sudan and Nubia.

Akhenaten's religious revolution did not last. Shortly after his death, Tutankhamun, who may have been Akhenaten's son, assumed the throne and returned Egypt to its former polytheistic religion.

This particular carving would have been restored either during King Tut's reign or one of his successors'.

An ancient record tells of Tutankhamun's efforts to try to undo the revolution Akhenaten had unleashed. The account blasts Akhenaten, claiming that his revolution led the gods to abandon Egypt.

The "temples and the cities of the gods and goddesses … were fallen into decay, and their shrines were fallen into ruin, having become mere mounds overgrown with grass," the ancient record states (translation by William Murnane). "The gods were ignoring this land … if one prayed to a god, to ask something from him, he did not come at all, and if one beseeched any goddess in the same way, she did not come at all."