One must hand it to Egyptians. Their legendary sense of humor has sustained them through the millennia, coming in handy to mark this week's inauguration of the new Suez Canal.

While the country's legacy media did their share of covering the stellar event, mostly in lockstep with the government's views, journalists, bloggers, activists, satirists, and everyday citizens took to social media with fervor to mock the celebration in their inimitable, tickle-your-funny-bone, fashion. 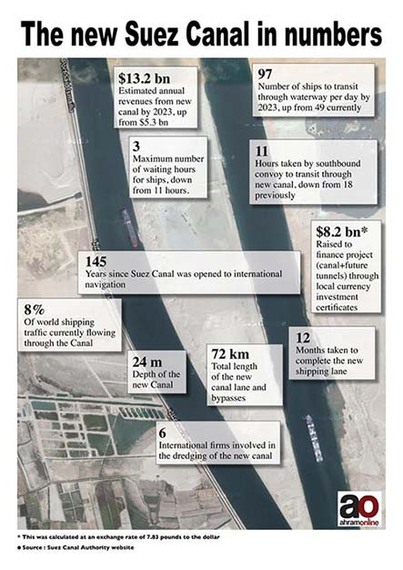 "Nokat" (jokes) and "tar-ya'a" (sarcasm) were the order of the day during the "historic" countrywide celebrations, with an endless stream on Twitter, making it hard to keep pace.

The following choice examples tell quite a story.

Mai El-Sadany tweeted: "They arrested a young man dressed like a rabbit in (Cairo's) Tahrir Square while celebrating the Suez Canal (inauguration)." 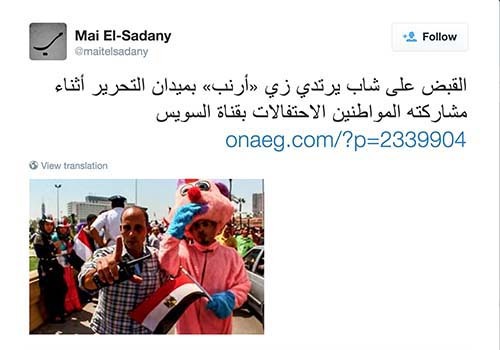 Reply from a tweep called the "Conte de Monte Presto" (pressure cooker): "They'll cook him with "molokhia" (a green soup usually served with rice alongside rabbits, chicken, or meat).

World heads of state who attended the inauguration included Francois Hollande, leading economist/development writer Mohamed El Dahshan to quip that the French president had arrived "riding his, ummm, 3.2 billion euros he got in arms deals from Egypt."

Countered Tarik Salama: "Not cool: Hollande came instead of sending Julie Gayet? To continue the tradition of Eugénie #France #Egypt ;)" 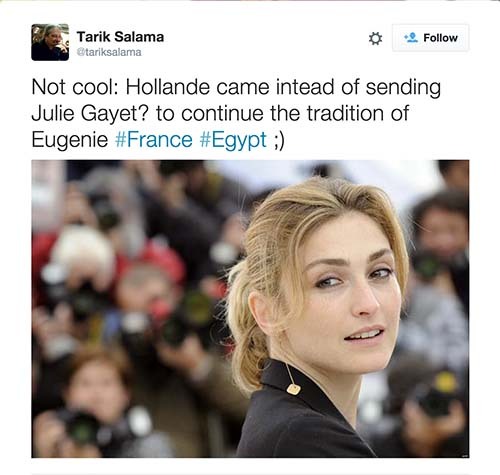 Salama was referring to Hollande's love interest actress Gayet who could have attended, as did Empress Eugénie dispatched by husband Napoleon III at the opening of the original Suez Canal in 1869.

The daily Al Akhbar on Wednesday published a cartoonish picture of El Sisi at the helm of a ship in the canal with Egyptians behind him waving flags.

The headline read "With our money by the hands of our workers" harking back to a song praising the Aswan High Dam built during the era of the late president Gamal Abdel Nasser. 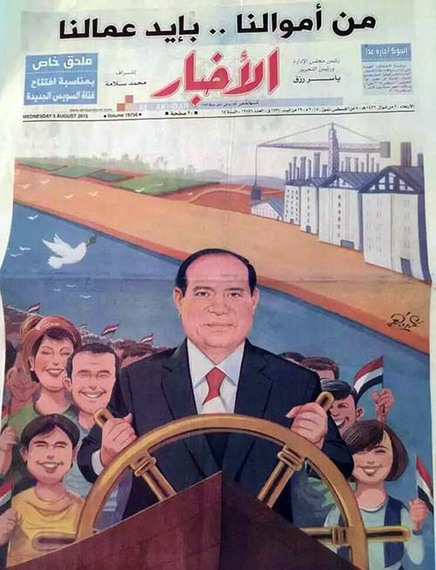 El Sisi and supporters are proud the new canal was completed in a year.

Al Masry Al Youm tweeted that one of Nasser's daughters urged a change of name of the one-time royal yacht "Al Mahrousa" (the protected) to "Al Hurreyya" (liberty) that El Sisi rode to the inaugural stand. 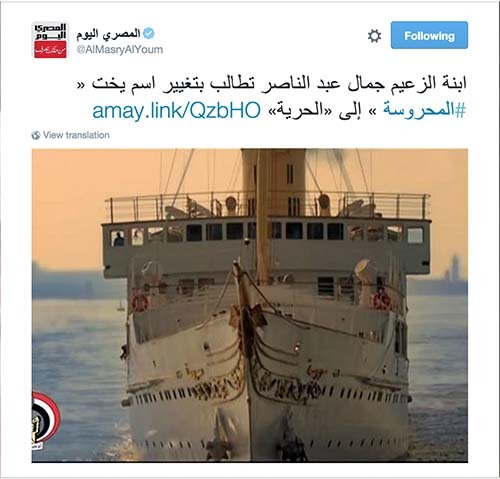 It was the first vessel to cross the original Suez Canal and almost a century later took the deposed King Farouk from the northern port city of Alexandria to his European exile.

El Sisi, decked out in field marshal's garb, changed into a suit on terra firma to greet VIPs and guests, prompting tweep Ahmad Abdallah to quote a (fake) presidential news alert saying the tight military uniform had split at the seams. 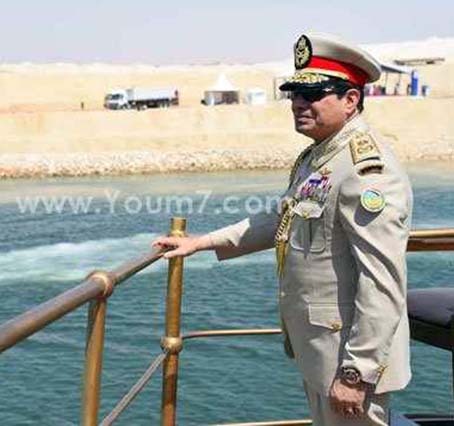 One jokster photoshopped the president on deck with his arms around Kate Winslet as in the blockbuster movie "Titanic."

In another tweet, before the change to civilian clothes, Abdallah said: "Halfway through the party he'll be dressed in shorts." 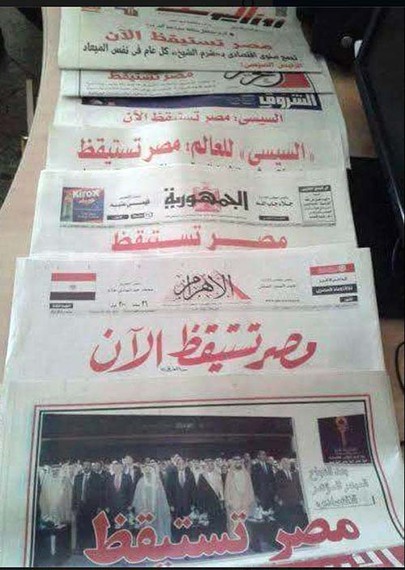 Eid's comment: "All Egyptian papers have the same editor."

Renowned satirist Bassem Youssef (a/k/a Egypt's self-exiled Jon Stewart), tweeted the now popular mantra/hashtag "Masr Betifrah" (Egypt rejoices) in rhetorical question form "fereht?" (rejoiced?), to be answered by a slew of rhyming slams like "ereqt" (I sweated), in reference to a heat wave that hit the Middle East this week and regular power cuts in Egypt. 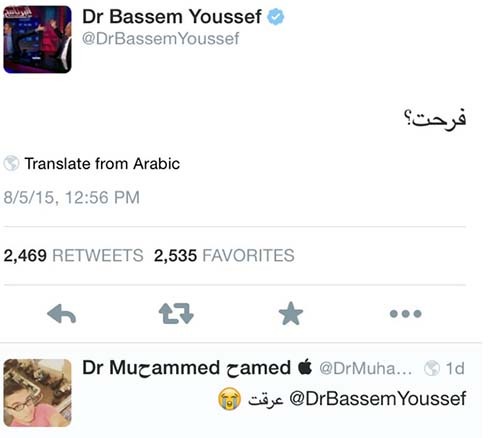 The celebration included speeches and entertainment.

Italian composer Guiseppe Verdi had composed the opera "Aïda" for the original canal's opening and Egyptian artists were commissioned to come up with their renditions for the new waterway.

But plump veiled female performers in floor-length Pharaonic costumes cracked up one Egyptian who tweeted: "Pharaohs with veils? How so, guys?" 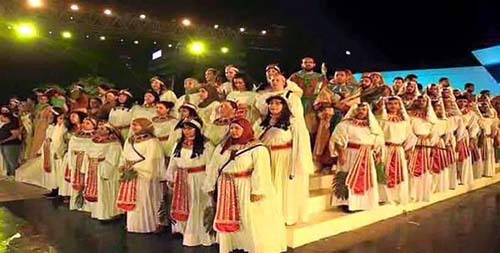 Pharaonic designs usually depict men in short tunics and women - unless royals wearing crowns - with head bands, but no covers.

A few miles northeast of the Suez Canal, Egyptian-born, Lebanese-Australian author Mishka Mourani tweeted a caricature of Pharaonic-era Egyptians at a cocktail party gossiping about one cool dude's new look, as opposed to the rigid parallel drawings seen on temple walls and papyrus scrolls. 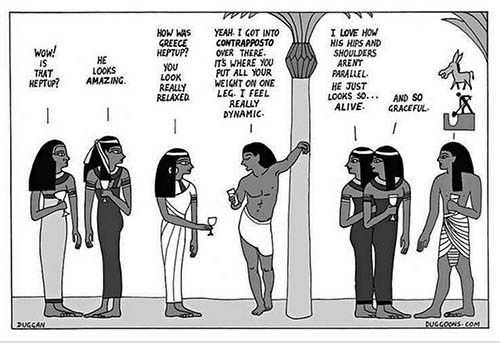