I just wanted to share some brief thoughts on the Muslim holiday.

There are millions of Muslims on the verge of concluding their pilgrimage (hajj) in Mecca; by the time you read this, they're already finished, exhausted and sharing the meat of a sacrificed animal with family, neighbors and the poor. Across the world, hundreds of millions more are putting on their Sunday finest -- thanks to God and the moon and the curvature of space-time for complying with the spirit and the law of the Western weekend -- and heading to mosques. Often way too early in the morning. (Can we comply with the Western sleep cycle?)

It's Eid al-Adha today, the Feast of the Sacrifice, the biggest holiday of the pan-Muslim calendar. Muslims remember Abraham's decision to sacrifice his son, spared only at the very last moment. In honor of that moment, an animal is sacrificed to God and its meat is shared with those close and those in need. The day before was the Day of 'Arafat, when many fast -- as in Ramadan -- in honor of the standing at the plain of 'Arafat, where Muslims on hajj pour their hearts out to God. But really and ultimately, this holiday is about Abraham.

The reason Abraham affects us so is because of his life's tragedies. God is asking Abraham to take the life of his son; rationally, reasonably, that is unbelievable. In the broader Islamic tradition, murder is of course forbidden: We've got Cain and Abel too. And this is sort of what Abraham keeps getting: He doesn't have children until his very old age, and this is a source of great distress for him. As it would be for any of us, but especially in his day and age. And then, when he has a son, God says, dump him in the desert. When he finds him years later, much to his relief and joy -- we can imagine tears of happiness -- God says: Take his life. Show me and the world you love me most.

Abraham's father refused to believe in him. His people tried to kill him. They even made a fire to burn him in, and tossed him in. He wanders alone through the world, without offspring, for years; even married, for a long time he has no descendants. When finally God gives him Isaac and Ishmael, he is asked to leave Ishmael and Hagar (Ishmael's mother) in the wilderness of Paran, the deserts around Mecca. In that stunning, amazing, incredible request, Islam truly and properly begins. The spiritual ground is seeded in a sacrifice that will echo through time, and result in the Prophet Muhammad, Abraham's final heir through his son Ishmael, and the global Muslim community, the Prophet Muhammad's brothers and sisters.

Time and again, Abraham is asked to sacrifice like no normal person is, or could be. He is asked to abandon, or take the life of his child, and God in each case intervenes. God saves. God guides. The greatest destiny unfolds in that tiny, stunning, unbelievable gesture of faith in God against all common sense. Or, as Iqbal put it, discussing Abraham elsewhere:

"Love dove into Nimrod's fire without hesitation / While reason's on the rooftop, merely considering the scene."

This is what Muslims celebrate on Sunday.

That prayers are answered, even if they aren't answered in our lifetime. That God tests us according to our capacity, and those of us who face the most hardship in dignity and fidelity are the most awesome in His sight. That God's promise is true. That the aches and pains in our souls will be healed one day. Perhaps not in this life, though; we must hold on to the rope of God until then.

Abraham was terrified he wouldn't have children. And in return for his faith, God gave him half the planet, Jewish, Christian and Muslim. It may well be that many of us pray more for Abraham and Muhammad than we do for any other families. Including our own. And the Muslim community centers its identity on him. We are his spiritual family, or at least hope to be. Little children of every ethnicity and nationality, all across the planet, stumble across words they will repeat for the rest of their lives, words they're taught to memorize, and often given gifts if they do, words which have an especially profound meaning on us today:

Eid Al-Adha: Some Prayers Last Longer Than Others
Eid al-Adha 2011 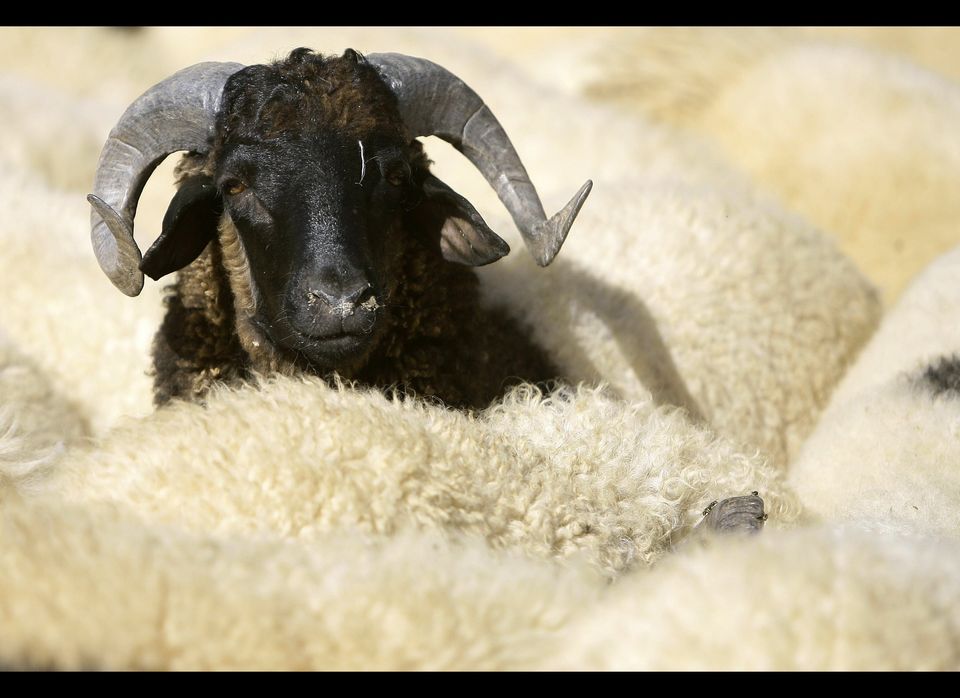 1 / 12
Eid al-Adha 2011
A goat is pictured in a Tripoli, Libya market on November 2, 2011, ahead of the Muslim Eid al-Adha festival celebrated by Muslims across the world to mark the end of the Hajj pilgrimage to Mecca and in commemoration of Prophet Abraham's readiness to sacrifice his son to show obedience to God. (JOSEPH EID/AFP/Getty Images)
Getty