The Eiffel Tower dimmed its lights after midnight on Friday to honor the victims killed and injured during Thursday’s terrorist attack in Barcelona.

The iconic tower shut off its lights at 12:45 a.m. and stood in darkness over the famed City of Light. Officials typically turn the lights off nightly at 1 a.m., according to the tower’s website.

Tonight, from 12:45 am, I will turn my lights off to pay tribute to the victims of the Barcelona attack. #EiffelTower pic.twitter.com/NVtVgAQmE8

A van rammed into pedestrians at a tourist hub in Barcelona on Thursday afternoon, killing at least 13 people and injuring over 100. Authorities have arrested two suspects in connection with the tragic incident and an investigation is ongoing.

Terrorists with the self-described Islamic State claimed responsibility for the attack, though police did immediately confirm the driver’s motive. One video of the crash shows people running from the car near Barcelona’s Plaça de Catalunya, while another shows people lying in the street, some bloodied and unresponsive.

Spanish Prime Minister Mariano Rajoy said after the attack that the country would defeat terrorism and offered his condolences to the families of the victims.

Anne Hidago, mayor of Paris, tweeted in solidarity with Barcelona and said their cities’ values were stronger than acts of terrorism.

Although the tower dims nightly, officials will shut off the lights earlier in recognition of an important event or to show solidarity with public emergencies like terror attacks.

Paris officials dimmed the Eiffel Tower in May after a suicide bomber attacked an Ariana Grande concert in Manchester. The city did the same in March when terror struck the London Bridge, as well as in December to call attention to the humanitarian crisis in Syria.

The Eiffel Tower also went dark at 8 p.m. in 2015 to mourn the Charlie Hebdo killings in Paris. 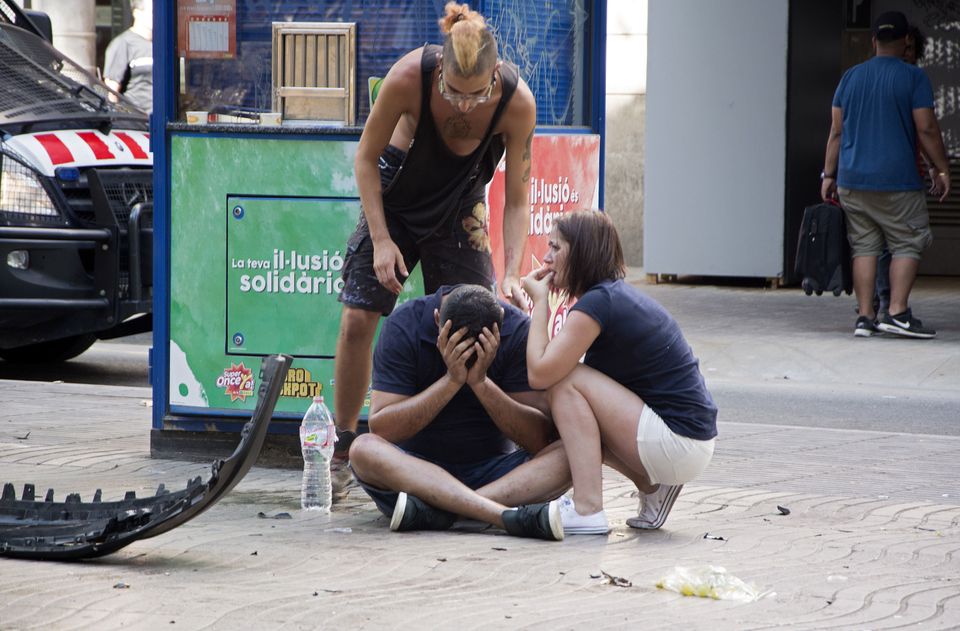 1 / 20
Injured people react after a van crashed into pedestrians in a crowded tourist area in Barcelona Thursday.
David Armengou/EPA/REX/Shutterstock