To some, it carries a religious overtone, with the suggestion that the United States was specially chosen by God to be the dominant world power. Those who subscribe to that notion tend to believe that America is a force for good in the world that will retain its global standing forever. They dismiss evidence of America's less than benign history by trivializing national misdeeds or pointing to the examples of how other empires have abused power in the past.

To others, "American Exceptionalism" reflects the fact that America is currently the dominant world power, militarily, politically and economically. They defend America's unilateral approaches as the right of the mighty thought they are aware that history is littered with empires that have risen and fallen. Perhaps they believe that our nation is uniquely destined to retain power, immune to the historical cycles of empire.

Some take a global perspective while focusing on the word "exceptional" to mean "unusually good." President Obama exemplified this notion when he stated, "I believe in American exceptionalism, just as I suspect that the Brits believe in British exceptionalism and the Greeks believe in Greek exceptionalism." This perspective aligns with many Americans who have traveled abroad and encountered throngs of foreigners who, though they admire and enjoy America, take great pride in their own culture, heritage and country and would never consider changing passports.

I prefer looking at this subject from a data point of view, asking where America is "exceptional" compared to other wealthy countries where I am using the definition of "exceptional" to mean "unusual." This definition does not make a distinction about better or worse, but rather focuses on situations where America is different from other countries. With that in mind, the data focuses on the Organisation for Economic Co-operation and Development (OECD) countries. The OECD is an international organization comprised of 34 countries, representing many of the wealthier countries in the world. Its members include North American countries (Canada, Mexico and the U.S.), much of Western Europe, as well as New Zealand, Australia, Chile, Israel, Japan and South Korea. Data from the OECD is readily available online and is a useful resource for cross-country comparisons.

What we see clearly from the graphs are:

GDP per capita versus population: The United States is exceptional in that it is the only OECD country with a population over 150 million, currently totaling around 315 million people. In fact, the only other OECD countries with populations of over 100 million are Japan and Mexico. China (not an OECD country), with a population of about 1.3 billon people, has a nominal GDP per capita of about 1/8th that of the United States. Health expenditure per capita versus life expectancy at birth: The United States is exceptional in receiving a very low return on its investment in health. The US spends much more per person on health than most other wealthy countries yet has a life expectancy that is shorter. For example, the US spends about twice as much per person on health as Canada, Australia and the United Kingdom yet American life expectancy is about 2 years less. GDP per capita versus motor vehicles per 1,000 people: Americans are exceptional in their love of driving, despite the environmental impacts. In fact, the United States has more motor vehicles per 1,000 people than any other wealthy country. Some of this American tendency to drive was stimulated by the government policies of massive road construction projects, maintaining much lower gas prices than other wealthy countries and directly financially supporting the automotive industry...all of which uses taxpayer dollars to support the American car and oil industries. GDP per capita versus incarceration rate per 100,000 people: There are few better examples of America being exceptional than in our incarceration rate. The US locks up about 0.7% of the population - about five or more times as much as other wealthy countries and around the level of the Soviet Union during the famous Gulag days. Despite showing no increased cost-effectiveness, American prisons are often a for-profit business and many of these companies have played a role in revising laws that increased our incarceration rate (current US incarceration rate is about four times higher than it was in 1980). GDP per capita versus homicide rate per 100,000 people: America's homicide rate is exceptionally higher than that of countries with similar wealth though it is dwarfed by the homicide rate in Mexico (note: Mexico's GDP per capita is about one-fifth that of the US; many of the homicides in Mexico are drug-related). In 2009, firearms were the cause of 67 percent of all homicides in the United States where America gun laws are generally much more lax than that of other wealthy countries. GDP per capita versus military expenditure per capita: The United States spends exceptionally more on its military per person than other wealthy countries. This massive American military budget represents about forty percent of all military spending worldwide. Enormous as it is, the budget doesn't include such other defense-related spending as FBI counterterrorism efforts, State Department foreign arms sales, Energy Department defense-related projects, NASA and satellites, veterans' benefits, and the interest being paid on debt associated with military expenditures. The influence of the military on America can be easily seen in the fact that the six largest recipients of US government contracts in 2008 and 2009 were all in the defense industry. GDP per capita versus income inequality (Gini): The United States has an exceptionally higher income inequality than any other country with similar wealth, exceeded in the OECD by only Chile and Mexico. Related to this high degree of income inequality is the fact that the United States has far less income mobility than other wealthy countries. A man's income in the United States is nearly twice as reliant on his father's background (an income elasticity rating of 0.41) as in Canada (income elasticity, 0.23). Moreover, 42 percent of the American sons of fathers born in the poorest quintile landed in the poorest quintile themselves. This American rate of the persistence of poverty was far higher than the 30 percent found in the United Kingdom and well above the 25 percent to 28 percent range found in Denmark, Sweden, Finland, and Norway. Education expense per student versus average PISA score: The United States invests greatly in education, spending more per student in primary through tertiary education than other wealthy countries except Switzerland. This is in line with the historical national priority of public education, as evidenced by the fact that as late as the 1930s, America was one of the only countries to provide universally free and accessible secondary education. Despite America's large investment in education, the outcomes, as measured by the most recent PISA scores are average indicating America is getting an exceptionally low quality return on its educational investment.

Note: The primary data source were the World Bank Database and the OECD database though the International Centre for Prison Studies and the SIPRI Military Expenditure database were also used. More analysis of this data appears in A Modest Proposal for America and Measure of a Nation. Follow Howard Steven Friedman's Facebook Fanpage 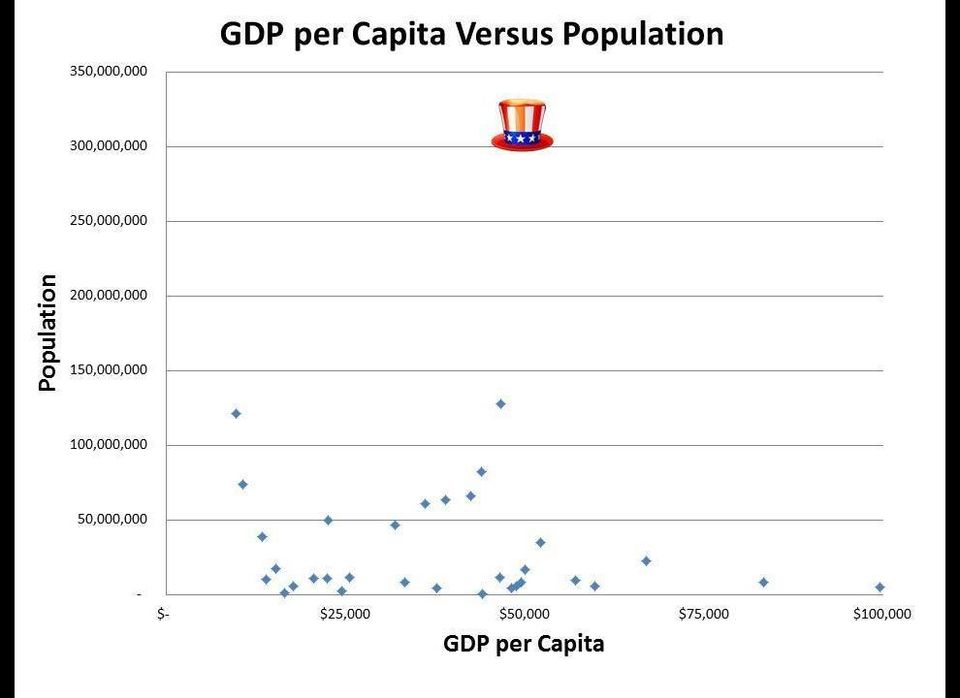