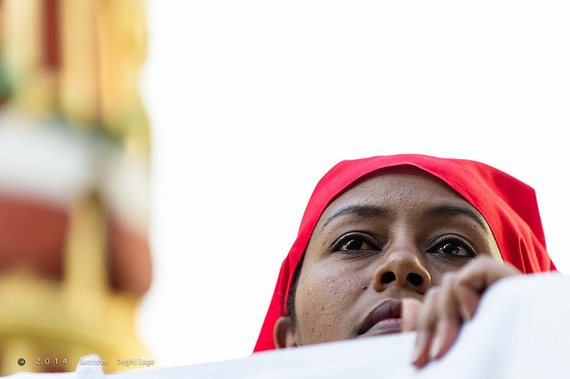 Every morning I pass a wonderful quote from Eleanor Roosevelt on the wall outside my office.

The battle for the individual rights of women is one of long standing, and none of us should countenance anything which undermines it.

With the release of the State Department's annual human rights reports, Roosevelt's words seem as relevant as ever. The reports show that we have a long way to go before the human rights of women and girls everywhere are protected. More voices are needed to stand up and declare that atrocities committed against girls and women -- indeed, against anyone -- cannot be tolerated.

The existence of atrocities is well-documented in the reports, which describe shocking human rights violations and abuses, as well as the societal conditions that make them possible.

But the reports are more than catalogues of abuse. They are tools in our work for justice, helping governments, civil society, the media, and human rights defenders make the case for change.

Many of the headlines in the reports are familiar -- like the brutal acts committed by ISIL or the repressive tactics of North Korea. But within each report are many stories that never make the evening news.

In Nepal, a mother may be denied the ability to confer her Nepali citizenship to her children if the father's identity is unknown or he is not Nepali. This is not uncommon: 27 countries discriminate against women in their ability to pass citizenship on to their children. Too often this results in a child who is stateless, meaning he or she may not be able to access basic services like health care and education.

In Afghanistan, a survey found that 39 percent of Afghan women between the ages of 20 and 24 were married before the age of 18 -- making them part of a global trend where one in three girls in the developing world is married as a child -- and Afghan women who marry later in life often don't have a choice in their marriage. These stories and statistics exist despite laws against early and forced marriage.

The reports also highlight specific incidences of human rights violations and abuses that ruined individual lives. A story in the Nigerian report highlights the case of a college student who reported that a soldier lured her to a police station and raped her repeatedly. The soldier was reportedly "disciplined" for leaving his post, but as of December nothing else had happened.

This kind of story illustrates how a stunning disregard for human rights affects people's lives -- and this young woman's life in particular. She is not alone. For too many, respect for their basic human rights is far from a reality.

In Burma, for example, there is an effort underway to enact legislation that would mandate that women can't have children more than once every three years. There are obvious questions as to how such a law would be enforced. Many are concerned that it would only be enforced in areas where many members of minority groups live. And it's clear that such legislation has little regard for reproductive rights, women's rights, and religious freedom.

Fortunately, the news is not all bad. The reports also shine a much-deserved light on how governments, civil society groups, and individuals are working to advance human rights.

In Afghanistan, the national electoral commission's gender unit focused on women's political participation in the 2014 election, and increased the number of women who helped determine their country's future.

In Brazil, the federal government operates a toll-free nationwide hotline for women to report intimate partner violence, while in India, a partnership between state government and civil society led to the launch of a crisis center for survivors of rape, dowry harassment, and domestic violence.

Another partnership -- between government and civil society in Guinea -- is helping to educate Guinean health workers on the dangers of female genital mutilation/cutting (FGM/C). The report says that more than 60 health facilities have integrated FGM/C prevention into their services thanks to this effort.

It's good to see that the value of partnership -- of the progress we can make when civil society, governments, and others work hand in hand -- is a theme in so many reports.

But we need more partners and more progress if we're going to eradicate the challenges we see across reports: discriminatory laws, domestic violence, rape, early and forced marriage, and so on. We need to continue to heed Eleanor Roosevelt's words and press for change, with no tolerance for human rights abuses, until these reports are no longer necessary.