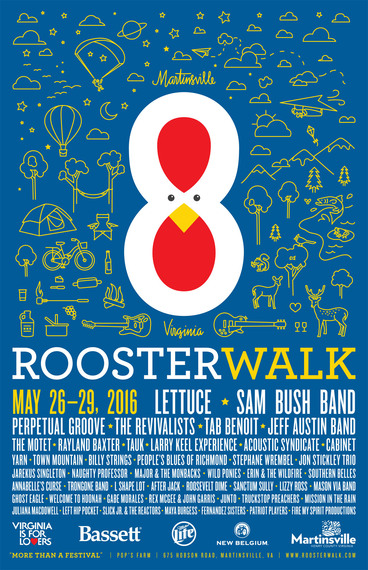 Rooster Walk 8 Music and Arts Festival, set for May 26-29 near Martinsville, Virginia, is a week away and just in case you haven't purchased a pass, I'm giving you eight reasons you don't want to miss it. But don't just take my word for it: The Richmond Times Dispatch recently named Rooster Walk among Virginia's best outdoor rock music festivals this summer and Blue Ridge Outdoors Magazine named it among the best Southern family-friendly festivals.

Rooster Walk Inc., a 501c3 nonprofit, partners with with fellow nonprofits Arts at the Rives Theatre, Piedmont Arts Association and the Martinsville-Henry County EDC's Tourism Division to help bring in more than 4,000 visitors to the area over the Memorial Day 2016 weekend. In addition, a portion of festival proceeds will be donated to the Penn-Shank Memorial Scholarship Fund at Martinsville High School and Rooster Walk Inc.'s Band Instrument Donation & Repair Program for entry-level band atpublic schools in the city and county.

"Rooster Walk has grown to become one of the premiere cultural events in our community, and the EDC is delighted to assist them in securing state marketing funds," said Jennifer Doss, director of tourism with the Martinsville-Henry County Economic Development Corporation (EDC), in a release. "Visitors travel from all over the Mid-Atlantic to participate in the multi-day festival each year and we know that with increased marketing this following of loyal fans will continue to grow, boosting area tourism."

General admission tickets are still available and there's plenty of fully-shaded GA tent camping with your name on it. Single-day tickets start as low as $25 each, and three-day passes are just $120, but be warned, prices go up May 25. Visit http://www.RoosterWalk.com or email info@roosterwalk.com for more info.