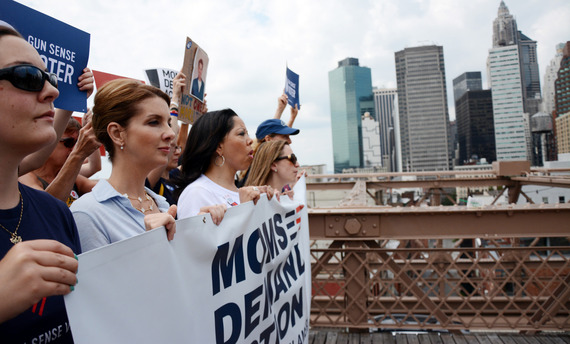 Three years ago, a thousand mothers and supporters came together to walk across the Brooklyn Bridge to protest gun violence after the murders of 26 Americans -- educators and children -- at Sandy Hook School. Devastated and angry, we walked and chanted in the bitter cold of January, igniting a movement that would become the Mothers Against Drunk Driving of gun safety.

Now Moms Demand Action for Gun Sense in America is a full-fledged movement with a chapter in every state, hundreds of thousands of volunteers and, as part of Everytown for Gun Safety, more than three million supporters.

In 2013, when Congress failed to pass background check legislation after Sandy Hook, it seemed, for a minute, that if that tragedy couldn't change our nation's culture of gun violence, nothing could. But the truth is that the gun violence prevention movement has grown exponentially--in part, because of Congress's failure to act. And we're winning in statehouses and boardrooms across the country.

That's why I'm so excited to spend Mother's Day weekend in New York to once again march across the Brooklyn Bridge with so many of the gun violence advocates and survivors who inspire me to keep fighting.

Here are eight reasons why we're marching for gun sense on May 7th -- and why you should join us.

1. The 2016 election is just around the corner -- and candidates are listening.

America will elect its next president this year, and our Moms Demand Action volunteers have been pressing all the candidates about where they stand on gun safety. It's more important than ever to show that we are a force, that we are changing how gun safety is viewed as a political issue. Moms are marching and gearing up to go to the polls this November to elect leaders who will keep our families safe.

We skip brunch and flowers for one day of Mother's Day weekend because the threat of gun violence affects all of our families. The theme of our march is #OneToughMother because we do this for our kids -- and we are unstoppable. The parents and grandparents marching across the Brooklyn Bridge will never back down when it comes to keeping our families safe.

3. You can still have your Mother's Day brunch on Sunday -- with a side of gun sense.

We know that many families will celebrate Mother's Day by making brunch or breakfast in bed. After marching across the Brooklyn Bridge, your family can use our 2016 Brunch Buyer's Guide to buy groceries at stores that have said "No" to the open carry of guns, and "Yes" to consumer safety. Thanks to the hard work of moms across the country, more grocery chains than ever have adopted policies to keep openly carried guns out of their stores.

4. Julianne Moore and Melissa Joan Hart will be there. You should be, too.

Hear from Julianne Moore and Melissa Joan Hart about why ending gun violence matters to them. Julianne is the head of the Everytown Creative Council, and a fearless voice for gun safety. Melissa is a passionate advocate for our Be SMART campaign, which encourages adults to practice safe gun storage to help keep kids safe from gun violence.

5. Send lawmakers a powerful message that we won't back down.

In statehouses across the country, moms have been pushing back against dangerous policies pushed forward by the gun lobby -- and we are winning. Last year, Moms Demand Action volunteers helped to defeat 64 gun lobby priority bills, and this year, we are racking up more wins, defeating bills that would have forced guns into schools and allowed people to carry hidden, loaded guns in public without any permit or training.

We have MOMentum. But the battle to end the threat of gun violence in everyday American life is far from over. We must keep going. We must keep marching.

6. It's a great way to teach our kids that their voices matter.

I'm a mom of five. It matters to me that my children know that their voices matter and can make a difference. At the Brooklyn Bridge March, kids will be onstage speaking out about gun sense and marching with us as we use our voices to collectively make a difference. No one is ever too small to make a difference. (All caring Americans are welcome -- you don't have to be a mom or even a woman!)

The Brooklyn Bridge March is much more than a feel-good moment. It's a manifestation of something bigger -- the effort to save lives. Every day, more than 90 Americans are killed by gun violence -- and hundreds more are injured. We can pass common sense gun laws and change our culture to save lives.

8. Why else should you join the Brooklyn Bridge March on May 7? Because Moms said so.

There is no tougher, more inspiring group of people than those you will meet at the Brooklyn Bridge March. Moms keep our promises, and our work is never done. After Sandy Hook, we promised to become a force at the ballot box and in statehouses across the country -- and we have been. We will continue to fight to save lives and we will not stop.

I invite everyone who cares about creating a country that is safer from gun violence to bring your signs, your kids, your neighbors and your voice to the Brooklyn Bridge this Saturday. Let's show the gun lobby and lawmakers that we're here to stay.